What is it about street food? Posted by Nicole Herbert Dean on Aug 14, 2021 in Culture, Food 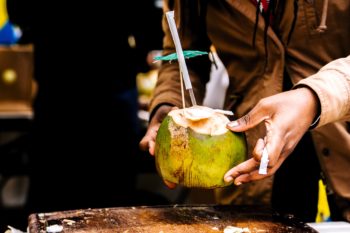 What is it about food खाना that is a cohesive जोड़नेवाला component of relationships!?

When it rains here my family and I immediately gravitate to the kitchen रसोईघर to prepare some spicy onion fritters, also known as bhajjias. Eating them with a sweet hot chutney and washing it down with hot sweet cardamom tea is a typical cultural activity सांस्कृतिक गतिविधि in a land many thousands of miles away.

Bhajjias are also known as pakoras. They are an integral अभिन्न part of the appetizer family in Indian cuisine भोजन. Dip the raw onion, potato or veggies into a chickpea batter laced with salt and chilli powder and deep fry. Simple but delicious स्वादिष्ट.

Street food sellers sell these pakoras on little carts गाड़ियां. They are handy to eat on the train as one journeys सफ़र an hour home after a long day at work.

Student’s love these snacks which are often served at the school cafeteria. And families love to serve these delicious appetizers accompanied के साथ by all sorts of beverages, not just chai.

I spent quite a few of my college years eating off the carts around Mumbai. Even though we went to these carts so often, we did not know the vendors विक्रेताओं by name. We referred to them all by the word bhaiyya which means brother.

There were different types of carts – the bhel puri cart had sev puri, pani puri and dahi batata puri. We had the choice of eating these faves spicy, or sweet or spicy and hot. Bhel puri is made up of rice crispies, raw onion, lime, green hot chillies, and deep fried chick pea crispies. Pani puri is composed of deep fried hollowed out chickpea bowls with a sweet, tangy and spicy water. The cummin in the water aided digestion.  Dahi batata puri was made from the same deep fried hollowed out bowls filled with chickpea, potatoes and onion in a lime and yogurt dressing.

Other carts that stood outside my school sold berries – gooseberries करौंदे, mangoes आम, star fruit and other dried berries with chili and salt sprinkled.

One of my favorite carts to eat at was run by a bearded old man who barbecued well marinated मसालेदार meat on a small coal stove that sat right on top of the cart. The meat was spicy but delicious and served with a nicely toasted सिका हुआ and buttered afghan bread. A simple salad of onion and lime accompanied it but it was a meal fit for a king in terms of delicacy विनम्रता. He also sold certain organs which are delicacies in Asia and the Middle East. I was not that adventurous साहसी and stuck to what I knew was beef.

As far as beverages off the carts – tender coconuts are a safe bet. The vendor opens it right in front of you and you can sip the tasty juice straight from the coconut shell.

At the beaches near my house we could also get shaved ice with various flavors. The water used to make the ice was of course of dubious origins but nevertheless quite tasty. Our immune systems प्रतिरक्षा प्रणाली actually kicked into high gear right around high school when we started haunting these eateries.

All these cuisines were available for under ten rupees. Considering we often ate it instead of supper we had a steal!