The World of Indian Sweets Posted by Rachael on Feb 21, 2018 in Hindi Language, Uncategorized

Although many Westerners complain that Indian sweets are “too sweet,” I have luckily never had that problem. With a sweet tooth stretching back generations in my family, when I discovered Indian sweets, my culinary world expanded tenfold! Below I’ve curated a list of five of my favorite sweets with short descriptions accompanying each. Enjoy!

This deceptively simple sweet (मिठाई) hails from the city of Mathura (मथुरा) in Uttar Pradesh (उत्तर प्रदेश). It has a somewhat soft texture similar to fudge but with more texture. Peda are made mostly from khoya or mawa (खोया or मावा), a common ingredient to most Indian sweets, sugar (of course) (चीनी) and flavorings such as cardamom (इलायची), saffron (केसर) and pistachio (पिस्ता). As khoya is so commonly found in many sweets, you should know what it is: it is made of either fresh milk (दूध) that is gradually thickened by heating in an uncovered pot or dried whole milk––here the high fat content is key. It is somewhat similar to ricotta but is much denser and contains less moisture. In your local sweet shop, you can find peda in a range of colors from caramel to creamy white, although the most common color is bright yellow. You may have seen laddoos (लड्डू), one of the most popular Indian sweets, as offerings in temples to Hindu gods; another common sweet you might see as an offering (प्रसाद) is, of course, the “humble” peda! 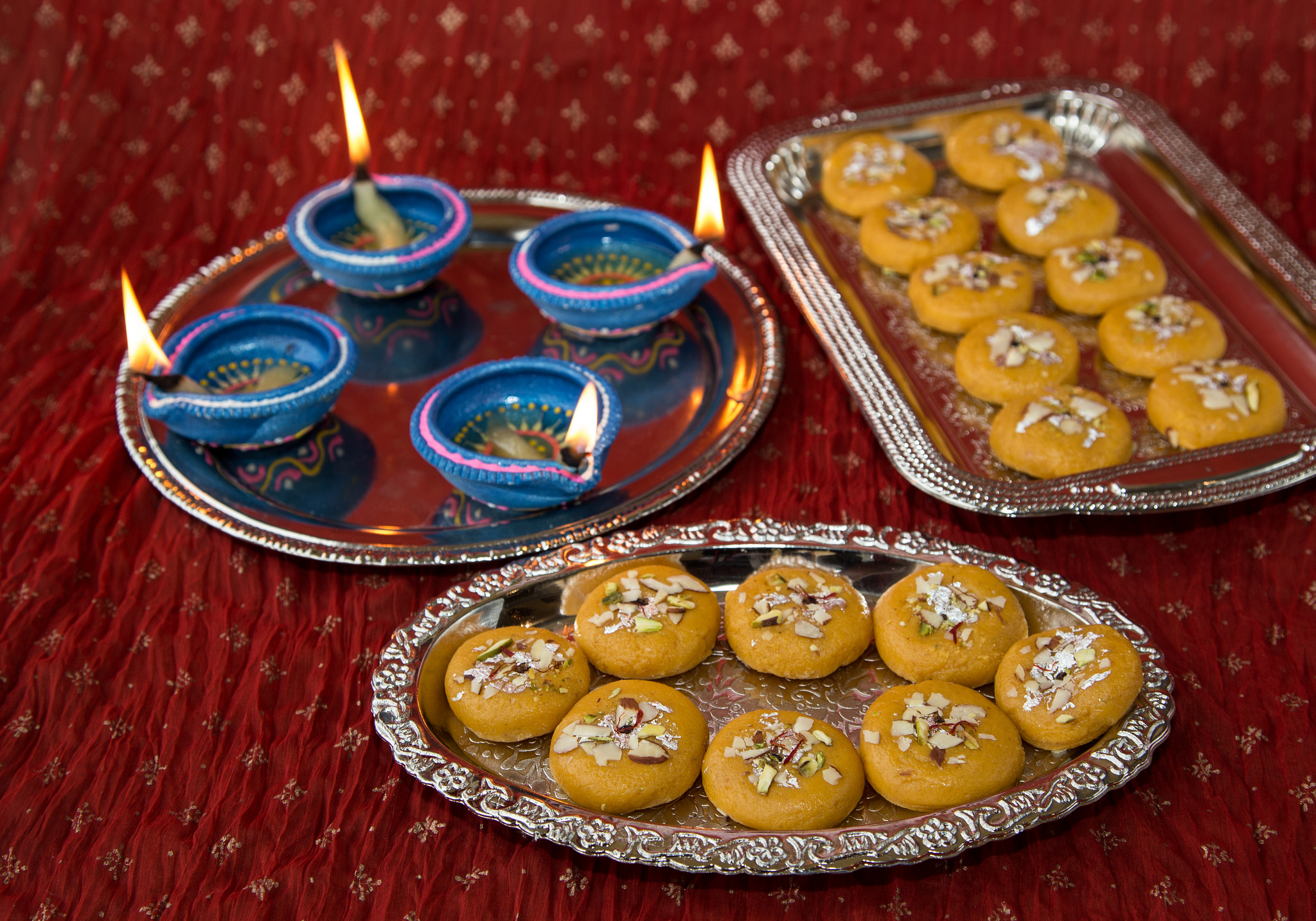 I instantly fell in love with this sweet when I tried it in Rajasthan (राजस्थान) during the Teej (तीज) festival (a festival celebrating the goddess Parvati/पार्वती and her marriage to Lord Shiva that occurs in late July or early August), when it is typically made with all of its components. A rich and grandiose sweet, it is made of flour, clarified butter or ghee (घी), soaked in sugar syrup and topped with a thick “frosting-like” spread made of paneer (पनीर), a cheese-like substance, and flavored with traditional tastes such as almond (बादाम), pistachio, saffron and cardamom. Here, though, the paneer is not savory as it often is but has been sweetened liberally. Ghevar is also sometimes flavored with kewra (केवड़ा), a flavor common to South Asian cuisine which is an extract distilled from the flowers of the screwpine tree. This sweet most likely hails from the capital of Rajasthan, Jaipur, and/or the city of Sonipat in Haryana. 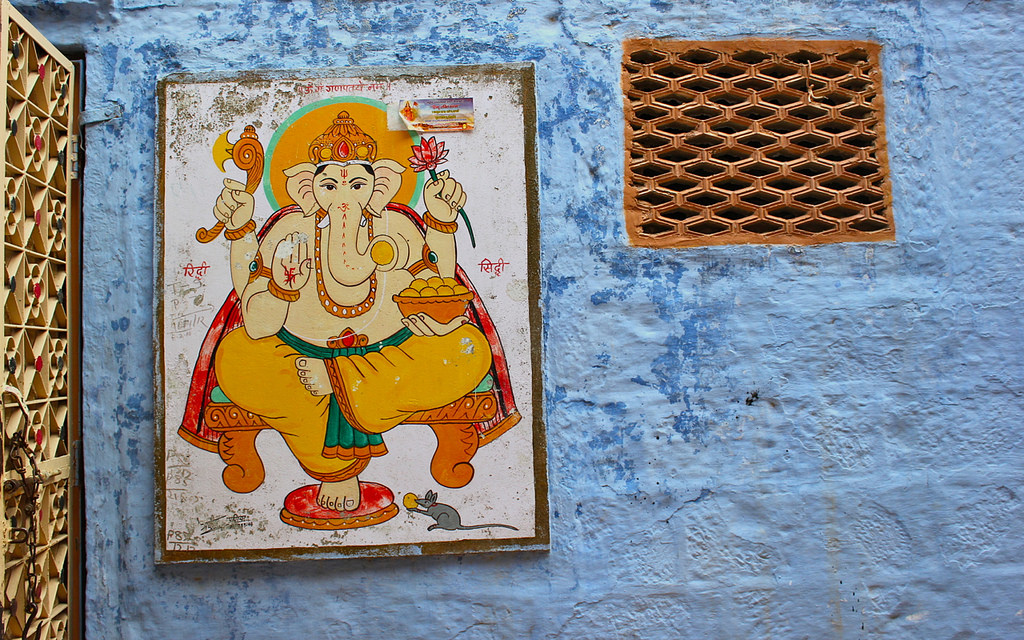 This sweet is also known as সন্দেশ/shondesh in Bengal, from whence it originally came. Like its North Indian cousin, barfi (बर्फ़ी), sandesh can be made in an almost unlimited amount of flavors, from chocolate to blueberry to the more traditional pista (pistachio). But, unlike barfi, sandesh is much lighter textured, delicate and almost crumbly and usually comes in a wider variety of designs. Sandesh is usually made from chhena/छेना or ছানা (a type of cottage cheese). The simplest variety of sandesh is called “makha sandesh” (kneaded sandesh), which is made by tossing chhena lightly with sugar over low heat. Chhena, by the way, are cheese curds made from water buffalo or cow milk. For more complex sandesh, you might dry and press the chhena and flavor it with fruit essences, color it and cook it further so that it reaches various types of consistencies that can be molded into increasingly intricate shapes. 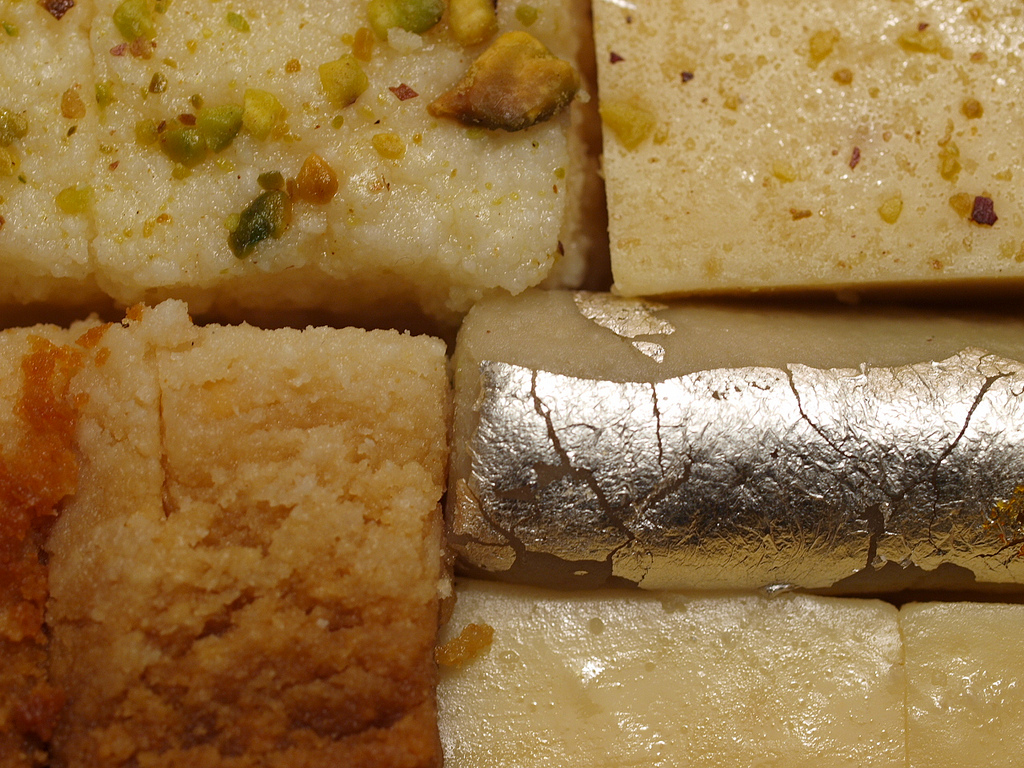 A box of North Indian sweets, including Barfi, Kaju Katli (cashew rolls) with decorative silver or varak and Milk Cake; image by Wilson Hui on Flickr, licensed under CC BY 2.0.

This sweet is perfect for a (relatively) light snack and is an incredibly thick yogurt (somewhat like full fat Greek yogurt) combined with milk and jaggery or गुड़ (cane sugar). It is very common in West Bengal and Bangladesh, although it is popular in North India as well. It is usually served in a small clay pot with a small, wooden spoon for ladling. This pot is not just decorative but also practical: its porous surface allows water to evaporate from the yogurt, further thickening it and the naturally cool temperature of the clay creates the perfect environment for the yogurt’s culture to flourish. You will also see traditional lassi (a yogurt drink) served in this way. 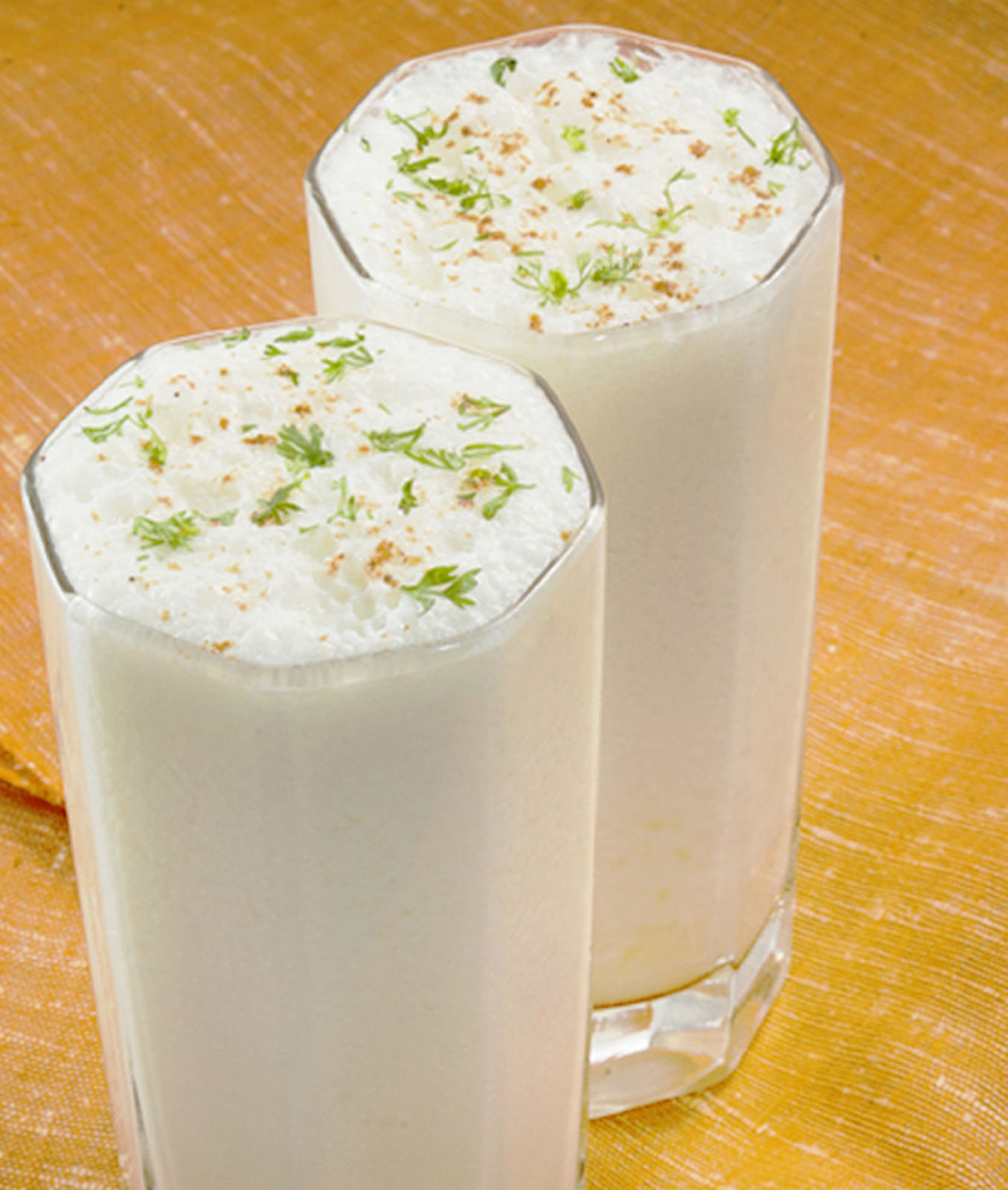 This sweet is extremely popular in North India not just for its taste but also because its method of preparation is, frankly, mesmerizing. It is made from a thin batter of maida or plain/white flour (मैदा), ghee and sugar that is put into a vessel with a small spout at the bottom and drizzled over a huge vat of hot oil into its characteristic concentric shapes. After frying for a bit, it is fished out of the oil and left to dry, but it is best to eat these while they’re still hot. Even better, you can pair this sweet with ice cream (strawberry makes a nice combination) so that the varying textures, flavors and temperatures will delight your palate! Fresh out of the hot oil, it is a sweet, warm mess of alternately crunchy and chewy fried dough filled with a sweet burst of sugar syrup that can be flavored with lime juice (नींबू का रस) or rose water (गुलाब जल). 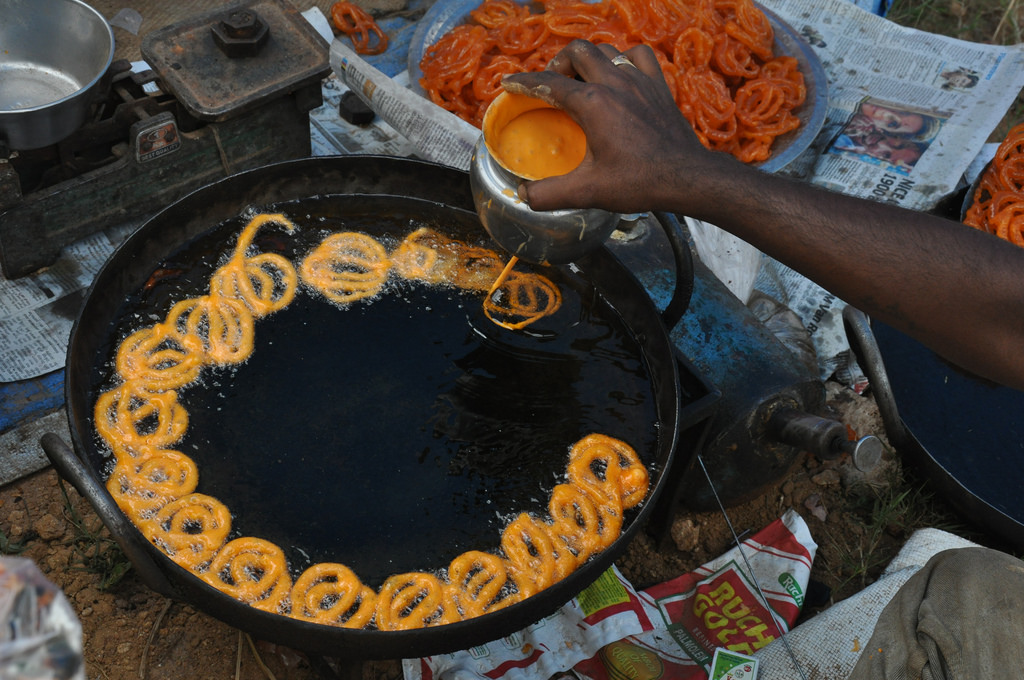