The myth of Sæmundur fróði. Posted by hulda on May 7, 2012 in Icelandic culture, Icelandic history 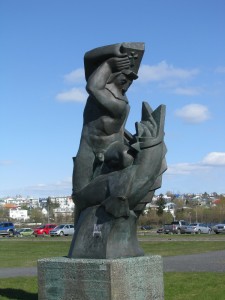 In the middle of the clearing, right outside of the old main building of the University of Iceland stands a peculiar statue of a man raising a book against what appears to be a fish of sorts. The fish is actually not a fish but a seal – and the seal is not in fact a seal but the devil himself – and the fellow administering some very literal Bible thumping is called Sæmundur fróði, Sæmundur the Wise.

Countless fairytales and legends surround Sæmundur, and the statue is depicting one of them. It’s said that as a young man he traveled to Europe (country unknown but possibly France) to study at a Black University where lectures were held by none other than Old Nick. After three years at the school all the students would leave the university together and as a reward for his work the devil would then claim the last one to leave.

Sæmundur let himself to be the last one in the queue and when he dressed up in his travelling cape he didn’t put his arms in the sleeves or button it in the front. That way when the devil made a grab at him he slipped out of his cape and managed to get out losing only a cape instead of his soul. As you may guess, this breach of contract did not go well with the devil, who then followed Sæmundur around for the rest of his life making spirited attempts at re-gaining his soul.

After this Sæmundur needed to quickly make his way back to Iceland and the devil offered his help. The reward would, naturally, be Sæmundur’s soul, and he agreed adding to the deal that his feet should not get wet on the way. The devil then turned himself into a seal and Sæmundur climbed on his back and began to read his Bible on the way. When they neared the shore of Iceland he raised his Bible and brought it down on the devil’s head as hard as he could, at which the seal sunk to the bottom of the sea. Sæmundur swam ashore, completely wet, and got thus away once more.

An interesting detail about this folk tale hero is that he was actually a priest. Iceland is peculiar in that a priest who used magic was not only an acceptable character but also revered for his knowledge and skills, all of which he learned from none other than the devil!  Similar characters in European lore do exist but they’re not priests as a general rule, rather travelling magicians or otherwise cunning men.

What’s more, the Sæmundur of the stories was portrayed as an unusually kind and selfless man. In yet another tale he agreed to help out a girl who had unwittingly promised the devil her unborn child: she had the devil perform all kinds of mundane chores for her, not knowing that she was pregnant the time when the reward was made to be “what she bore under her apron” and naturally despaired when she found out how things were. Sæmundur, however, knew immediately what to do. At first he told her to ask the devil bear water in a box that was full of holes and then hid himself near the church bells. Every time the devil went past he rang the bells, causing all the water to immediately fall out through the holes of the box.

The story is entertaining but what makes it quite original is that no particular notice is ever made to the fact that the hapless girl seems to be pregnant out of wedlock – once upon a time it was considered a crime that was punishable by death. Apparently Sæmundur did not hold this against her and the story has a happy ending.

In the end I’d like to also note that Sæmundur was not actually a fictional character but a real man called Sæmundur fróði Sigfússon (1056-1133) who lived in Rángárvellir in the south Iceland. He’s well-known for his writings, none of which sadly have survived (but are mentioned in other saga texts) and also for apparently having been a really, really clever man, smart enough to leave such an impression on people that it grew into myths and legends of a man smarter than the devil. For this trait the University of Iceland wanted his statue to a prominent place, wishing to remind students of the importance of knowledge and possibly also of that there are more ways than one to make a book’s contents meet the brain…