Homosexuality in the viking era. Posted by hulda on Aug 16, 2012 in Icelandic culture, Icelandic history 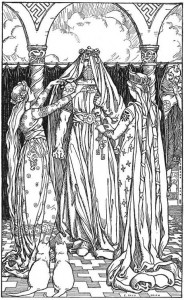 What a Lovely Maid it is!: Wikimedia Commons

Last weekend’s Gay Pride reminded me of another topic that I’ve been thinking of writing about for a while now: homosexuality in viking era Iceland. Despite of what some of the legends of the Norse gods such as Ása-Þór, Loki and Ódinn suggest, attitudes seemed to have been somewhat against it in everyday life and grew only stricter with the arrival of Christianity.

To begin with it’s important to note that homosexuality as it is now did not exist in Iceland. This is not to say that homosexuals themselves did not exist, they definitely were around already. It simply means that people of the era had no way of being exclusive about their preferences. Pre-Christian Iceland did not consider homosexuality a crime as such, but attempting to avoid marriage because of it was illegal. In short, society demanded that every member of it should produce children first and foremost, what other relationships there were besides that were a private matter. Considering there were numerous slurs against homosexuals I think it’s safe to say these were not something anyone would have been open about.

Only one type of homosexual activity seems to have been fully acceptable in the viking era north, which was playing the “active” part, especially as male sexual aggression towards opponents that lost a battle. A good example can be found in the Guðmundar saga dýra where Guðmundur plans the rape of a traitorous couple, both the woman and the man, that he’s taken captive. This kind of humiliation occurred because raping someone was counted among hin meiri sár (= the deadly blows) that could be dealt against the body: a wound to the brain, torso or the marrow. It was considered “unmanning” a man to make him “play the part of a woman” or as Íslensk hómilíubók so elegantly puts it, “those appalling secret sins perpetrated by men who respect men no more than women”.* 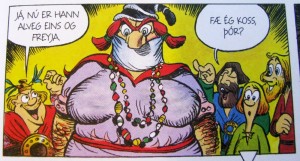 This attitude no doubt would have had a huge impact on homosexual relationships. If serving as the passive part equalled being dealt a lethal wound I highly doubt any man could have ever even considered doing that to someone he loved (that was of equal standing). The slaves were a different matter: among them were even male prostitutes.

For women things were perhaps a little bit easier since they did not have to worry about their manliness. Many viking era households held concubines along the official wife, which meant that there was always a group of women who were not related to each other living in the same house. In the house itself there were parts that were considered so feminine in use that no man would have been able to set foot in those rooms without getting branded effeminate, so even if the master of a house did not accept his wife’s possible tendencies there was not much he could do to prevent it. Besides viking era women in Iceland held considerable power in marriage and could use that to force or blackmail their husband to bend to their will if necessary.** 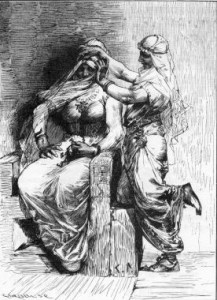 Wearing the other gender’s clothes was also considered humiliating, not only to the person doing so but to their spouse as well. It was counted among acceptable grounds for divorce for example, as the sagas can tell. In Laxdæla saga Guðrún Ósvífursdóttir, in love with another man, sews a new shirt for her husband that has an open neckline like a woman’s shirt. The husband fails to notice this, wears it in public and she divorces him on the grounds of cross-dressing.***

Here’s a small vocabulary list of related old Norse terms for your entertainment. Granted,  they won’t be of much use in everyday language but I’m sure knowledge in them will make for a great party trick!

Níð = perverted, insulting, (passively) homosexual, lawless. The same term is still used in glíma, Icelandic traditional wrestling, for forbidden moves.
Níðingr = (passively) homosexual
Ergi/regi = the one who is willing to bottom, an effeminate person. If used of a woman they mean slut/bitch/lecherous one instead.
Argr/ragr = adjective for ergi/regi. Lit. transl. unmanly. Can mean anything from cowardly to homosexual.
Rassrarg = butt-unmanly. The word rass is still in use in Icelandic, by the way!
Argaskattr = a payment for a male prostitute’s services.
Stroðinn, sorðinn = sexually used by a man. The viking era laws dictated that if a man called another any of the above words the target of the insult had a legal right to kill him, or at the very least try his best to.****
Fuðflogi = a man who shuns marriage because he prefers men to women, and since this was illegal it’s also a criminal term. The literal translation would mean “runs away/flees from vagina”.
Flannfluga = a woman who does the same. Literal translation for this would be “runs away/flees from penis”.

*The more I study history the more I appreciate the present day.

**Most often the women of the sagas use this power to make their husband go and kill someone whose family the wife does not for one reason or another like too much. This is quite a drastic measure though, and more commonly the wife would rather send one of the servants or male relatives to the task. Hallgerður of Brennu-Njáls saga even sends a relative of hers to kill her very own husband for some personal revenge.

***Curiously the love of Guðrún, Þórður Ingunnarson, is a married man himself and also files for divorce for his wife’s supposed cross-dressing! This is based on a rumour spread by none other than Guðrún herself – as she rides to the annual Þing she goes to talk with him and says:

“Is that true, Þórður, that Auður your wife wears trousers with gores in the seat, with swathings round her legs all the way to her feet? …and for what reason is she called Trousers-Auður?”

This is all untrue of course, but as the marriage between Þórður and Auður is unhappy and since his eyes are already on Guðrún he gladly takes this as an excuse to divorce her.

Auður, humiliated as can be, does not take this very well. Later on she actually does what she’s been accused to do and dons trousers, ties a sword at her waist and attempts to kill Þórður in his sleep. This fails but Þórður does receive severe wounds which render his other arm unusable ever after. Yet, even though he fully saw who had attacked him he forbids his kinsmen to go after Auður and says that “she only did as she ought to have done”.

****In some cases these slurs were used to force the opponent to fight you, as was done by Sinfjotli in Völsunga saga. Here’s a quick translation of the diplomatic talks that went on right before a battle broke out:

Granmar: “Are you an idiot?”

Sinfjotli: “Maybe but at least I don’t wiggle my butt to every man who comes along like you do!” 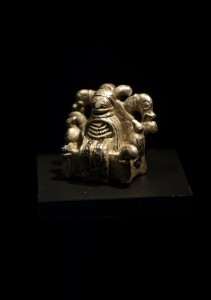 A small statue of a person wearing a long dress, a cape and woman’s jewellery, flanked by two wolves and two ravens. Whether this actually is Ódinn is not certain but the hints are definitely there!

With the exception of the last image all images in this post illustrate the well-loved scene in Þrymskviða where Þór has to grudgingly disguise himself as goddess Freyja in order to regain his hammer Mjölnir.