Subjunctive mood and how it’s used, part 1. Posted by hulda on Feb 28, 2013 in Icelandic grammar 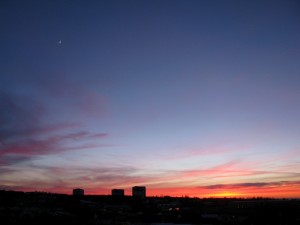 Viðtengingarháttur, the subjunctive mood, is an often used verb form in Icelandic as it not only shows the typical subjunctive mood unreality – wishes, hopes, suspicions, plans, possibilities etc. – but is necessary for the most common polite phrases. Viðtengingarháttur -forms exist in both present and past tense. The word itself is a compound word made of tengja við (= to link, to join, to connect) and háttur (= grammatical mood), almost a direct translation of the other name for subjunctive mood, conjunctive mood.

A simple rule of thumb is that when using viðtengingarháttur, all the verbs of the sentence have to be in the same tense. Sounds simple but don’t be deceived: it can be somewhat difficult to choose the correct one, especially if you have to decide in a fraction of a second which one to use. There’s a clear difference in meaning between saying f.ex. “þetta sé rétt” (= that would be correct) and “þetta væri rétt” (= that would have been correct), but luckily Icelanders can usually tell which one you’re going for even if you get it wrong. If in doubt, try both; whoever you’re talking to is almost certainly going to point out the correct form.*

In present tense viðtengingarháttur tends to show a wish or an expectation of something:

Hún vonar að þið komið (= She wishes that you would come).

Hún vill að hann fari (= She wants that he would go, or in better English, “she strongly wants him to go away”).

Ég held að þetta sé rétt (= I think that would be correct).

In past tense it’s often used to note a possibility or an uncertainty:

Hann vissi ekki að hún væri heima (= He did not know that she would have been home).

Hann vissi ekki hvort hún væri heima (= He did not know if she would have been home). 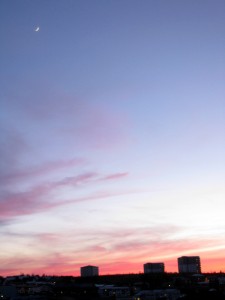 Other uses for the viðtengingarháttur are sayings that wish for or look forward to something:

Fari hún til fjandans (= She should go to the devil)( in other words: “she can go to hell”)!

I left the most important one for last – the politenesses. Icelanders do not use specifically polite terms while they speak, but instead they use the conjunctive to hint that instead of bluntly expecting for something to happen they are accepting that the outcome depends on the other person’s will.

Note that when using the conjunctive mood in this context you’ll have to use the past tense.

One sundown as seen from the top of Breiðholt, Reykjavík.

The most typical verbs used for polite speech are vilja (= to want), mega (= to be allowed to, may), þykja (= feel like), þurfa (= to have to), eiga (= to have, to have to), geta (= to be able to), skulu (= shall, will) and munu (= shall, will). Since they’re going to be useful I suggest learning them in all their forms by heart. The easiest way is probably by going to BIN, Beygingarlýsing íslensks nútímamáls, and simply writing the verbs in the search field one by one. Since the program cannot recognize misspelled words even if all it’s missing is one accent mark, it’s best to just copy paste them from here and then hit leita (= search). It should either give you an answer right away or, in case of duplicate words, a list of possibilities. Choose one that says sagnorð (= verb) and scroll down to the boxes that say viðtengingarháttur nútíð (= present tense) and þátíð (= past tense).

Remember that BIN website, by the way. It will be your best friend in no time, especially to those that are learning the language on their own and have no chance of using it in daily life. It’s a priceless source of information when you’re writing in Icelandic, when you need to check some word for translating it correctly and so forth – like that example in last week’s post “Þig vilja hryggja“. If in doubt, check BIN for what form of verb is being used – “vilja” is a plural form so you know that it cannot pair with the “þig” in the sentence, therefore the correct translation is “They want you to grieve”.

The subjunctive mood is, of course, far more complicated a thing in Icelandic than this. I felt that trying to stuff all the information in one post would make it a pretty daunting task to learn, so I’m planning to do the same as with the pronunciation guides and divide it into sections. This first post has been the simple basics, I’ll be adding more entries (and linking them all together for easy browsing) as we go.

*Tried and tested on real Icelanders.**

**No Icelanders were harmed in the making of this blog post.