Hiding in plain sight 2: more than a church. Posted by hulda on May 12, 2014 in Icelandic culture, Icelandic history

Continuing my little series of things that may interest a traveler yet are free and within your reach even in the capital city: the area between Hallgrímskirkja and Tjörnin, the ornamental pond downtown. But why see this area in particular?

Images by Audrey on flickr.com, me (the background) and Loki from Wikimedia Commons.

The statue park of Einar Jónsson

Continuing your sightseeing route, the museum that hosts art by Einar Jónsson also sits right next door to the church. He’s often titled as the first sculptor of Iceland and due to an interesting deal with the government he donated all his works to the country, which means that there’s plenty to see here! You can choose between paying for an entrance ticket to the museum itself or just taking a stroll in the statue garden, which is entirely free of charge. On sunny days this is a great spot for people to meet and the statues themselves are definitely worth your time, ornate, of the symbolic style, amazing, so full of details it’ll take a good while to take them all in. Not all the statues are of such manly nature as my example picture by the way: Glíma (= traditional Icelandic wrestling style, also name of said statue) just happens to be very popular for some reason. 😀

To be exact the place he went to was – surprise surprise – Cafe Loki. He was even tweeted standing outside of it.  If you’re a fan you might well be interested in having a look and even if not, the place is worth a visit anyway. Maybe pop by after first seeing the church next door, Leifur Eiríksson, the aforementioned statue garden and maybe the museum as well? To my knowledge this is currently the only cafe downtown that offers hákarl (= the infamous rotten shark) on their menu if you dare to have a try!

The area itself that opens between the church and Tjörnin is quite charming. Small houses side by side often separated by roads no wider than walkways, multicoloured and designed with what I can only describe as Icelandic carelessness. If the owner thinks the house should have a tower, a tower it will have. If neon green is their favourite colour the whole neighbourhood will know it. There can always be additional parts to your house, as my SO found when we went to see a place where his uncle used to live, only to find that the staircase had disappeared under a small additional “wing”.

The haphazard general look of architecture in Reykjavík is by no means only found in this area. What is special is, however, the variety you’ll find here, everything from huge villa-like houses to crumbled functional style concrete apartment buildings to small houses, all stuffed together in a very random manner with an occasional piece of art or a tiny park left in between. The picture is the start of it – from there on the streets really get small. Don’t worry about getting lost here by the way, it’s such a small area that sooner or later you’ll find your way out of there. It pays to be curious here because lots of interesting little shops etc. are sitting quietly around this area and are definitely worth having a look at! 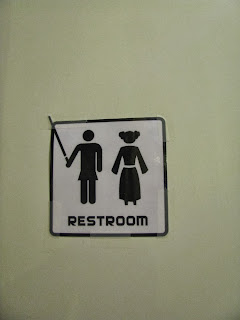 One of the most loved cafes, also situated near the church. Don’t be fooled by the size of the place when you first walk in because it actually goes on on two floors, terrace and a balcony. The food is especially good, the carrot cake being my eternal favourite! Just one small warning: the place is popular like mentioned, which means it tends to fill up fast. Let that not hinder you too much though, as another hint you really should see the WC downstairs. There’s a reason I put that rather unusual photo to illustrate this part.

Reykjavík is The Place for cat lovers. Letting them roam free outdoors is typical, and especially on sunny days you’ll see cats lying on and draped around everything imaginable. Many of them are used to attention from strangers as Icelanders seem to have a habit of talking to cats, something I’ve often witnessed myself. This area is a real hotspot for them. Considering the amount of cats running around wouldn’t most of them likely be strays? Well – no. Every single cat I’ve met downtown has been an obvious house cat. Due to the fact that they’re allowed to come and go as they please cats often go missing in Iceland, which means that anyone with Icelandic friends on the social media will get regular notices of cats, lost or found.

More entries in this series: Seltjarnarnes and its lighthouse. Hvalfjörður, elves and monsters. Snæfellsnes. Harbour of Reykjavík – you need to find it first!

Hulda recommends music First of all: congratulations Austria and Conchita Wurst for winning the Eurovision! Icelanders are claiming partial victory by the fact that their song, No Prejudice, seemed to herald this victory. 😀 Let’s go back in time a little now and listen to the sound of Svanhildur Jakobsdóttir and the 70’s in Iceland. The video of Skötuvíkurskrallið might also be an interesting window back in time.

Images used in this entry that do not belong to me: Kæstur hákarl by Audrey and Loki Laufeyjason from here.