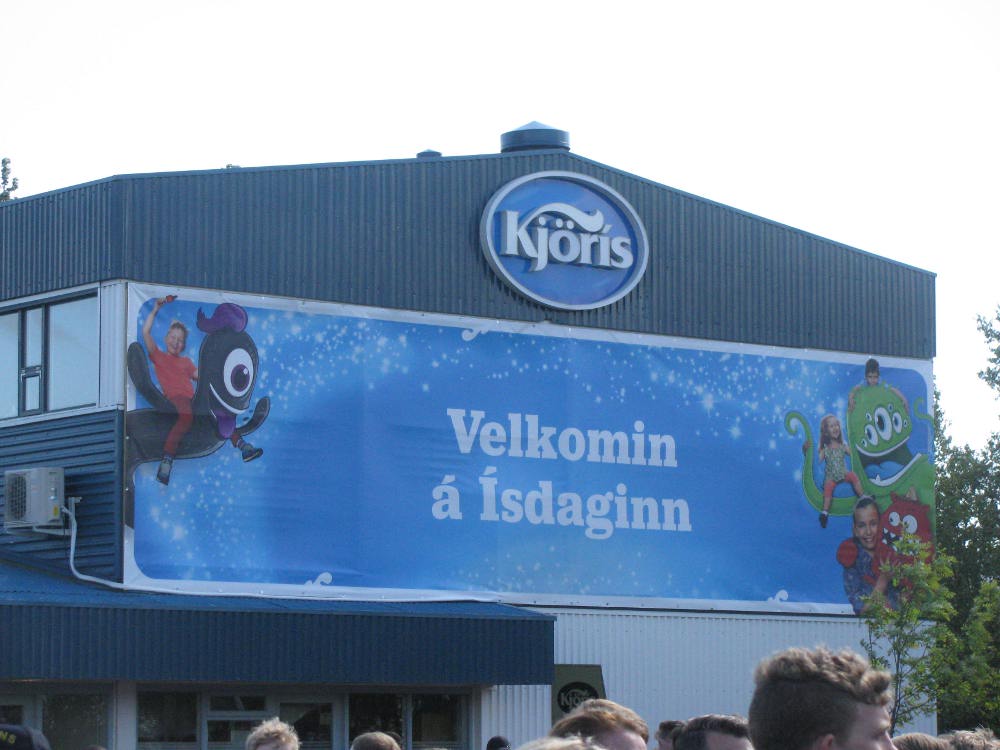 Hveragerði is a small town on the south coast of Iceland that’s particularly well-known for its greenhouses and, once upon a time, its large botanical garden that sadly burned down to the ground a few years ago and has not been rebuilt since. Yet there is one more thing that Icelanders know it for: ice cream.

Ice cream is serious business in Iceland and enjoyed throughout the year, something which took me completely by surprise when I first moved here. One of the largest local companies, Kjörís, is based in Hveragerði and holds an annual ice cream tasting fest there where they bring out possible future flavour ideas and naturally also some flavours they’re really not considering for the market, they just make them for this fest in order to… well, I’m not sure, but maybe to have a giggle at people trying them. 😀 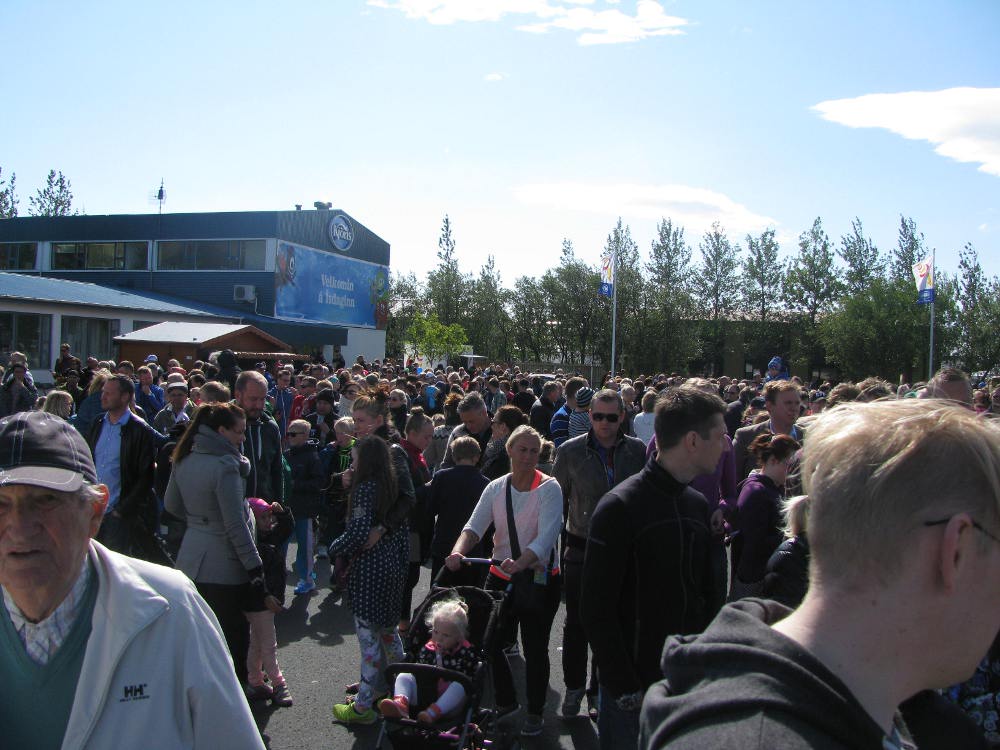 The festival is massively popular going by an Icelandic scale. Most of the people you see in this picture are actually forming a very wide queue towards… 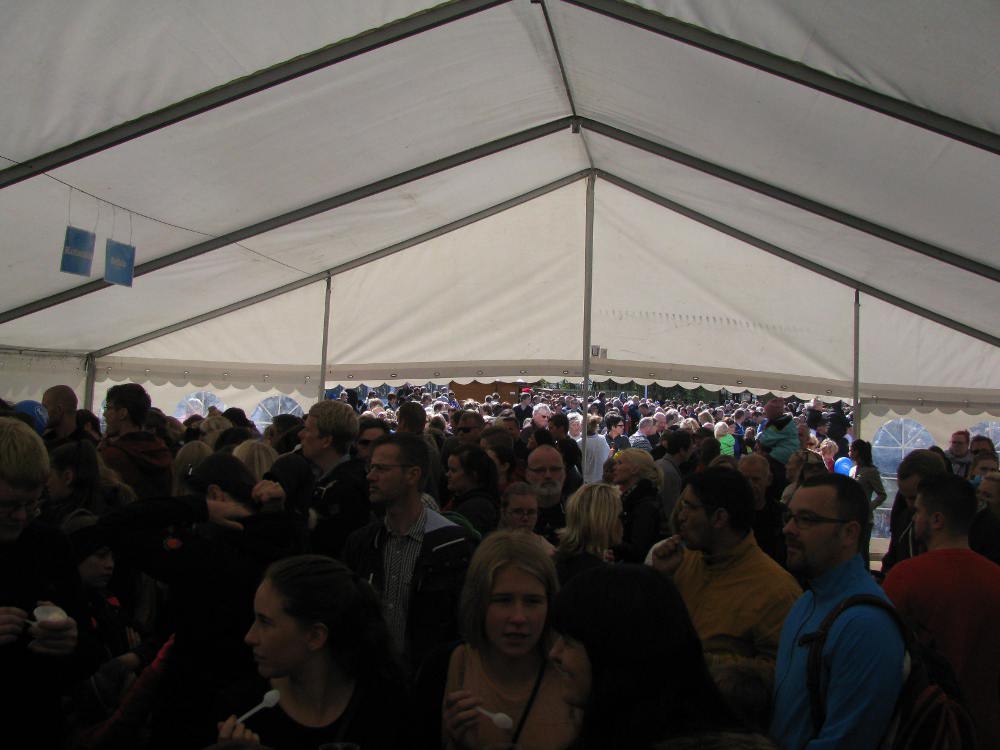 …the ice cream tasting tent, and here you see the same queue from the inside of said tent. The left side and the back were lined with long tables where staff were busily spooning ice cream samples into little bowls and the queue sort of milled around in an orderly fashion. I know, that sounded kind of contradictory but I have no way of properly describing the chaos that somehow still managed to move from table to table with almost no elbowing included. 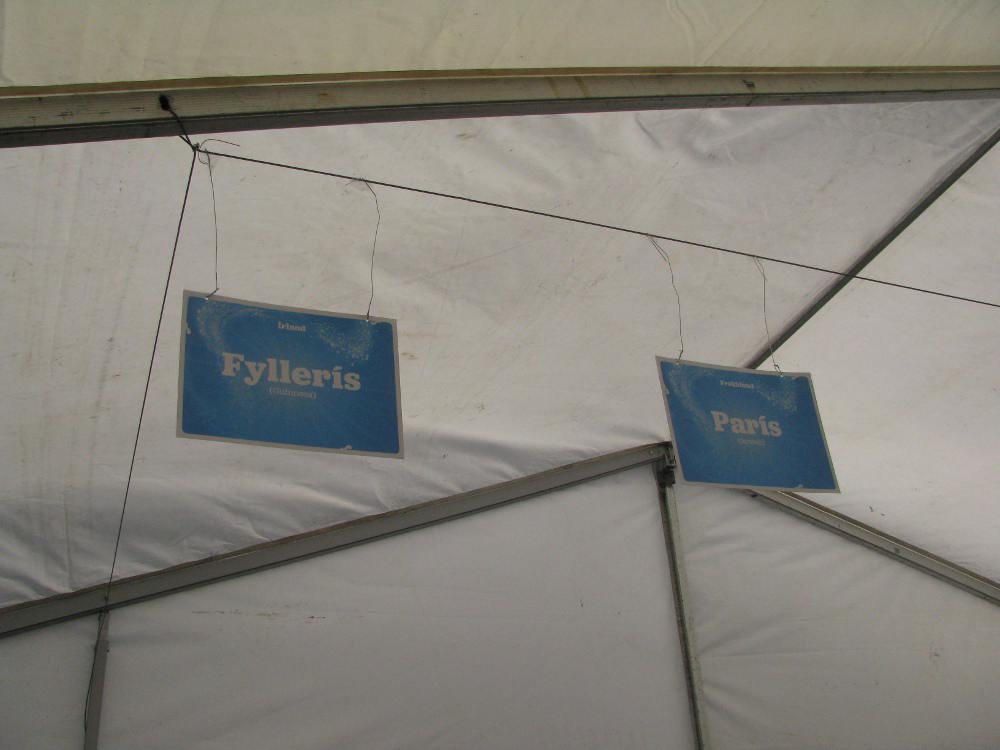 Each flavour had a name to describe it with the actual ingredients listed below. Here’s Fyllerís (fyllerí = binge drinking, drinking lots of alcohol, ís = ice cream) and París (that’s an easy one – just a pun of Paris the city). Below the small text lets you know that Fyllerís is Guinness beer and París cognac ice cream. Both were unbelievably delicious, I know this because I sampled them very thoroughly. Just to be certain you know, the level of unbelievableness called for a scientific approach and whether this ice cream tastes just as good if eaten f.ex. from another box. Based on my research I’d say it tastes still as good 100% of the tries and should hopefully become a new ice cream flavour for the company. 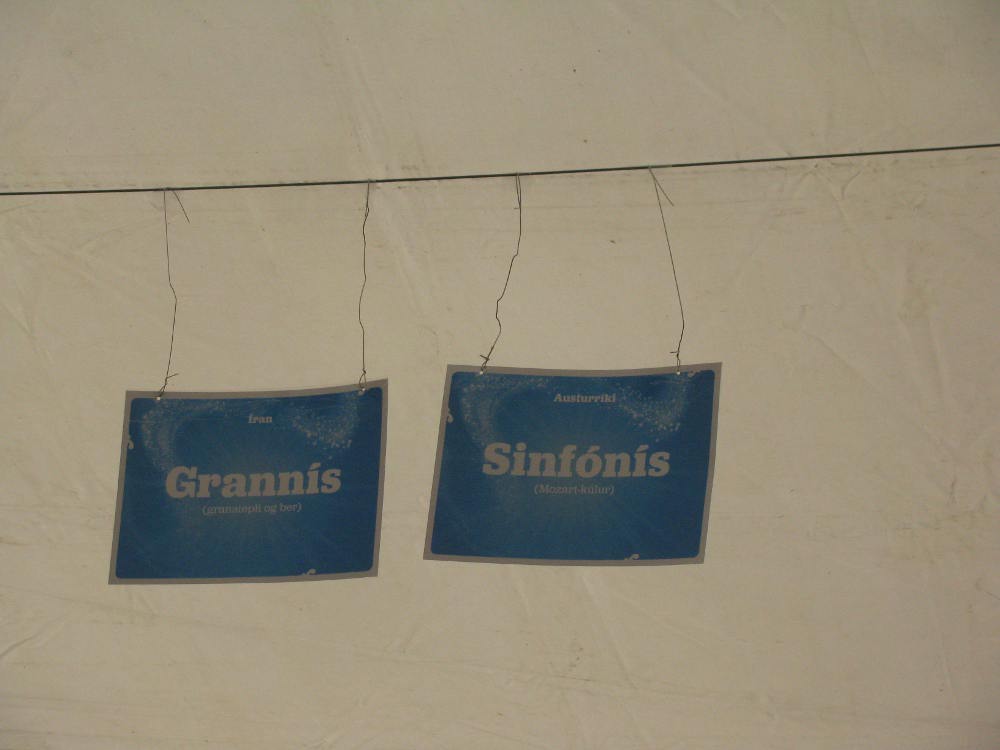 The flavours seemed to have a country theme too – Grannís with green apple and berries represents Iran and Sinfonís (another easy pun) with Mozart chocolate naturally Austria. 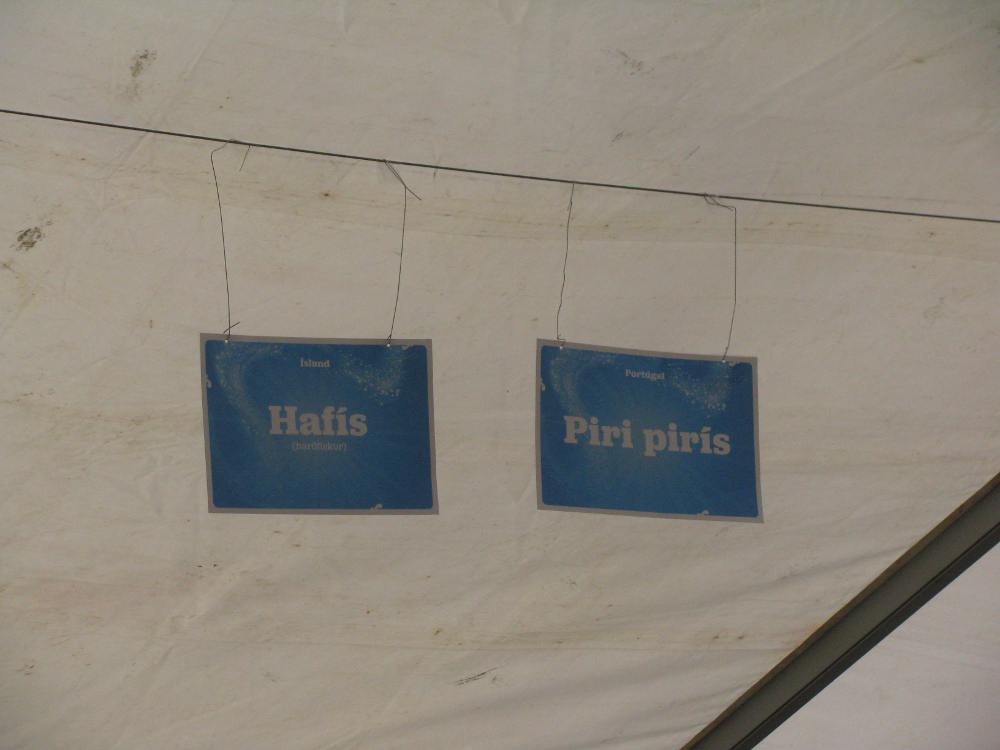 Moving onto the more unusual flavours, Piri Pirís (piri piri ice cream) and Hafís, which coincidentally represents Iceland. It’s also a punny name because it can be read either as “sea ice cream” or “sea ice”. As for the taste… it had dry fish flavour. It was akin taking out a scoop of ice used for storing fish, adding milk and sugar and blending it all together. It was honestly revolting. The company had done this with the obvious idea of trolling people, at least judging by the size and amount of containers they had prepared for each flavour. For the more popular flavours they had tall stacks of them and several people manning the stalls, for Hafís… just a few boxes and one person. 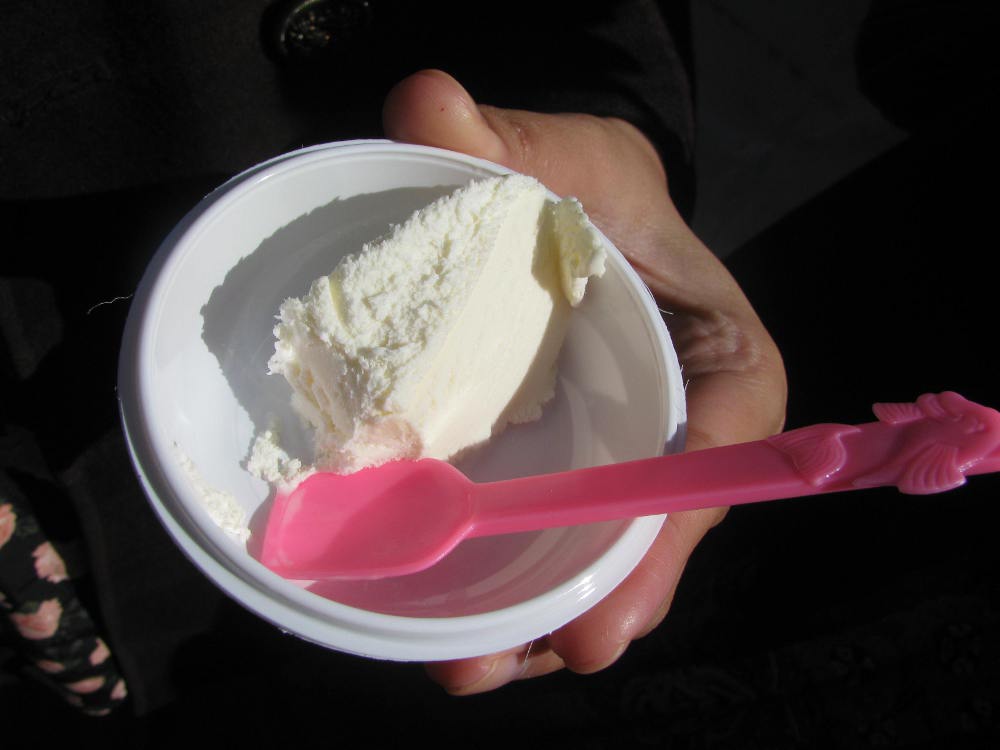 However, sometimes trolling goes very, very right. This here is called Búbís. It doesn’t mean anything in Icelandic but try saying it out loud and you may get an idea of what the main ingredients might include! Hint: the “ú” is pronounced like “oo” in “good”. 😀 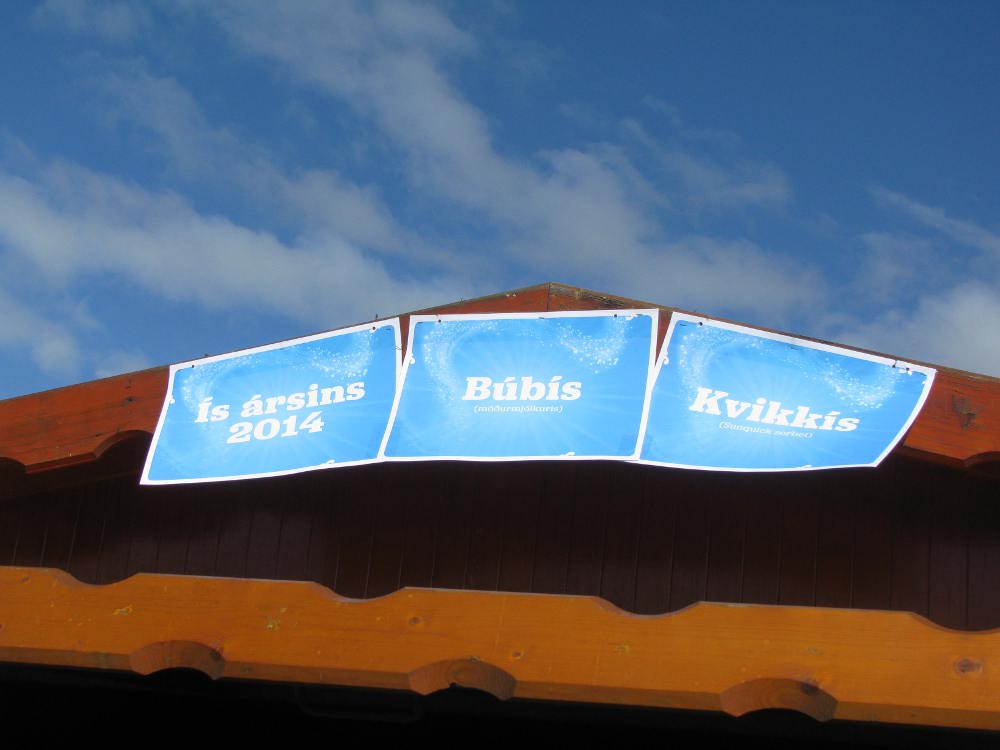 Most of the tasting stalls were inside the large tent but the flavours thought most popular were outside instead. Ís ársins 2014 (= ice cream of the year 2014), Kvikkís that used Sunquick as flavour and the Búbís mentioned above. Móðurmjólkurís = mother’s milk ice cream, in other words breastmilk ice cream!

I admit doubting it at first. The idea actually came from a radio show prank where someone called the person in charge of the new flavours and suggested it. Little did they know that after everyone had laughed at the joke the idea behind it stuck on the other end and, she said, she just had to go with it. She had already began to plan it in all seriousness during the call and could not let go of the idea. Good thing she didn’t because you know what? It was delicious.

Sadly they cannot start producing this ice cream like other ice cream flavours because the source or the main ingredient cannot be guaranteed at all times, but it was definitely a great experience for the ice cream tasting day! 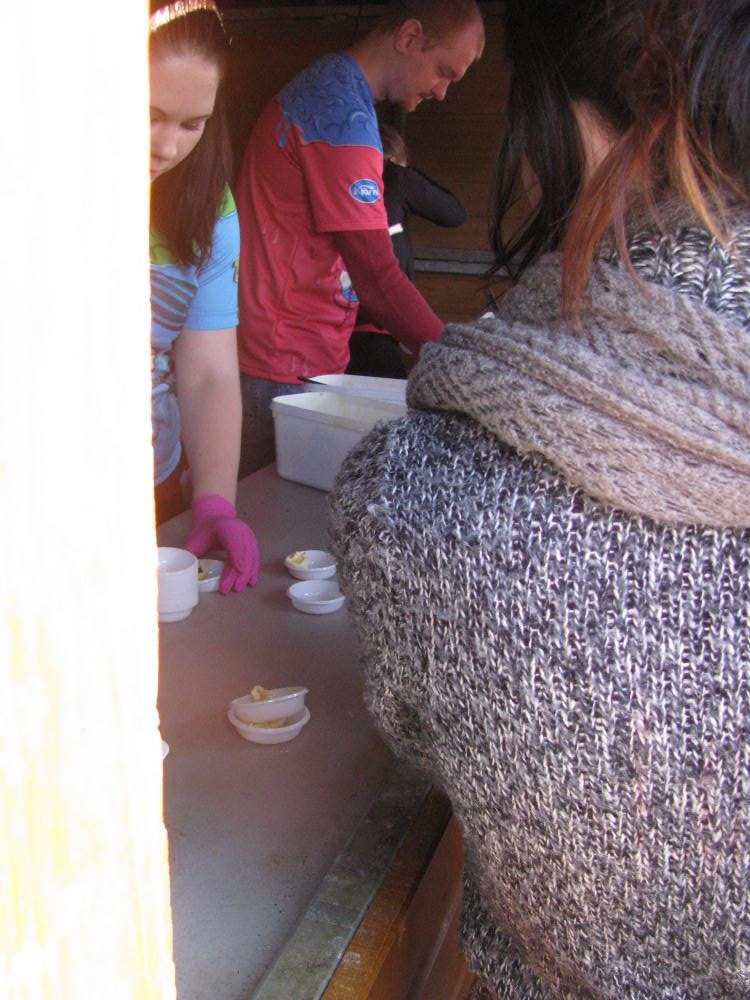 I tried to get a picture of the staff at work and the size of the samples but people kept literally walking in front of the camera. The pull of free ice cream is strong…

More photos and snips of one of Icelanders’ favourite songs that was played live at the fest; you can listen to it in full here. If you’re DJing and want everybody on the dance floor try Bahama eyja (= Bahama island). My apologies for the wind noise, Hveragerði is one of the windiest places I’ve ever been to (south Iceland in general gets the strongest winds). 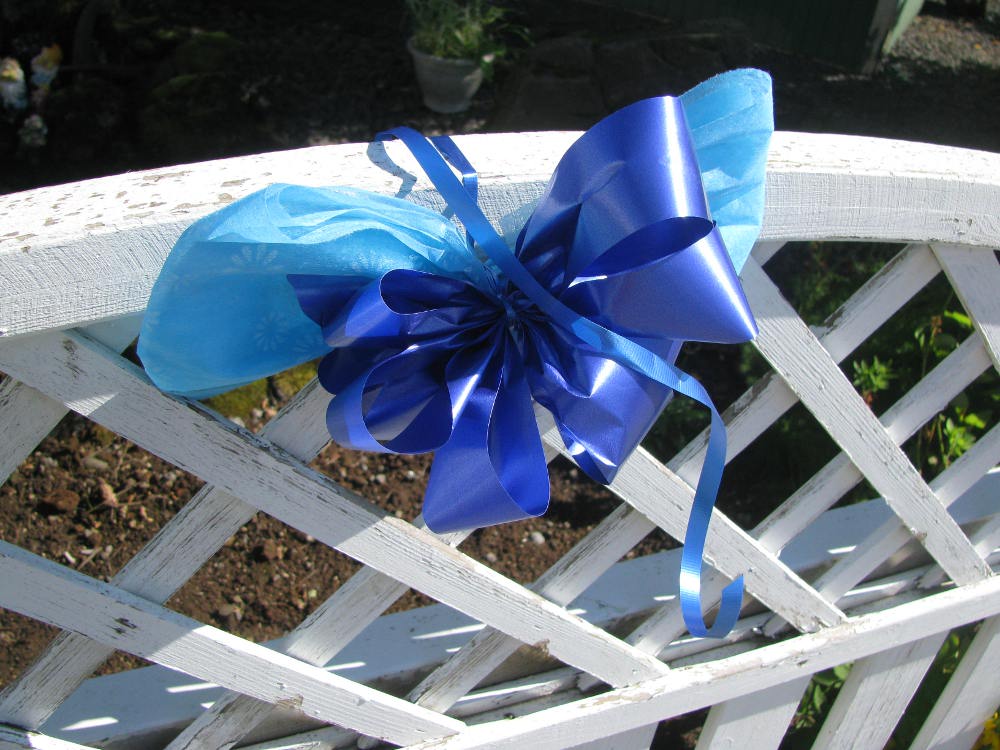 The whole town was decorated for the day. So just in case you’re visiting Iceland in the summer keep your eyes open: little festivals like this happen all around the country throughout the summer, so if you have the chance do have a look!