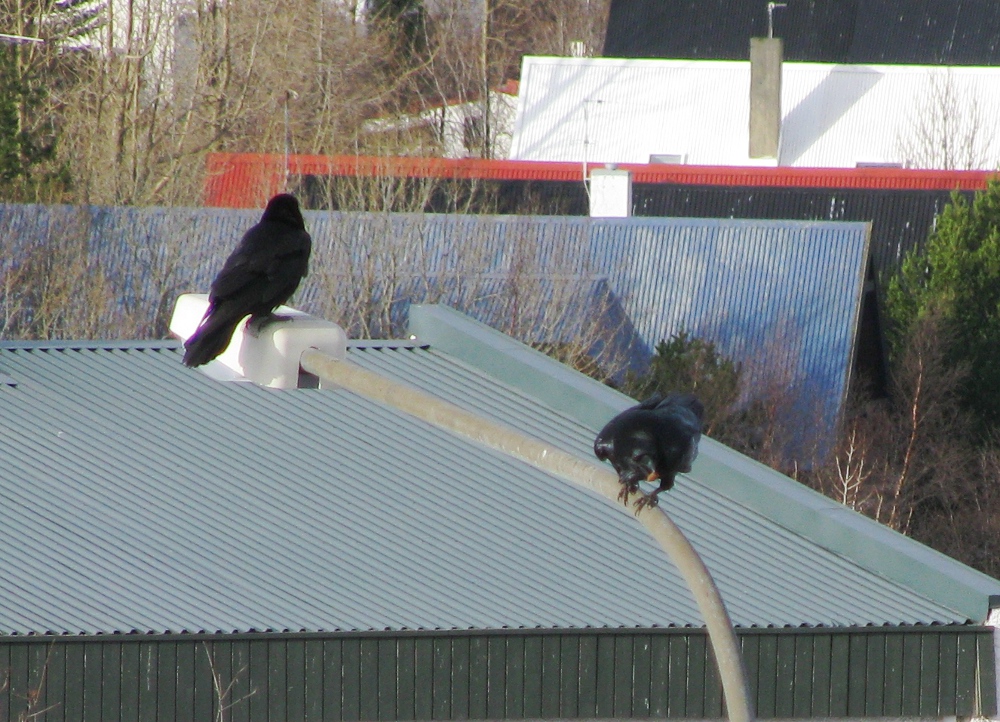 Autumn, nothing makes its arrival clearer than seeing a familiar shape fly over Reykjavík, perch on lamp posts and sing – er, cronk – from the rooftops. Ravens are back in town after spending the long summer in the countryside, during which time their place in the city is claimed by seagulls. Now its their turn to make way and so the season changes from white wings to black ones almost overnight.

Known as hrafn or by a playful nickname krummi, ravens are considered a very lucky, handsome and clever bird by the Icelanders. Yet at the same time the old Pagan view of them as Óðinn’s pets lives on, making some interesting contrasts; these well-loved birds are also found in old poetic words such as hrafnfæðir, which means soldier/warrior but translates as “raven’s food”. Similarly hrafnvín (= raven’s wine) actually means blood. Their seasonal nature has also lent itself into Icelandic vocabulary such as in the words hrafnagusa and hrafnahret which both mean a sudden cold period during the summer. 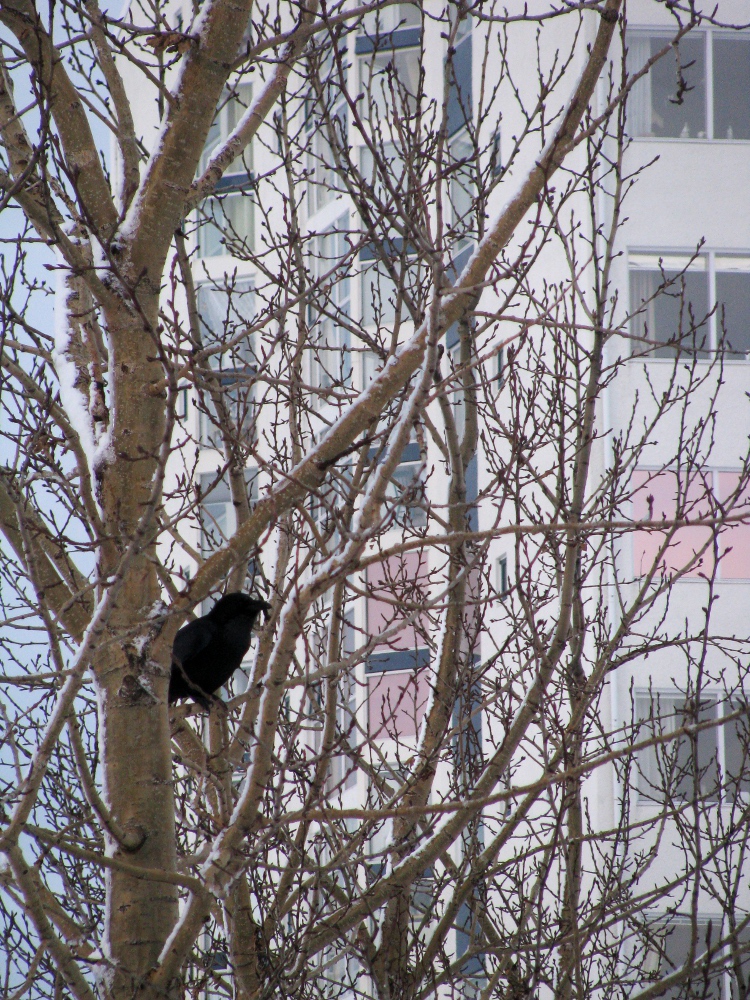 Late autumn and a young raven. Getting this close to it was a big mistake though, the adults didn’t like it… next time I’ll just use the zoom.

Naturally such an important animal will also be found in sayings. Sjaldséðir hvítir hrafnar (= rarely seen are white ravens) is said to someone that the speaker hasn’t seen for a long time. Að vera eins og úfinn hrafnsungi (= to be like a tousled raven chick) is used to describe someone whose hair is a mess. Guð borgar fyrir hrafninn (= God pays the raven’s dues) means that giving food to ravens brings good luck. Að vekja hrafnana (= to wake up the ravens) comes from the fact that ravens are usually the first birds to sing in the morning, therefore someone who actually wakes them up has risen from bed quite early!

Where we live we tend to see the same raven couple every year, or at least so I assume. One of them is huge and fat even for a raven which makes him rather obvious, but this is really all I base my assumptions on. On occasion there may be a small raven that comes along with them in the autumn, which I’ve taken to be their chicks. The smaller one usually disappears at some point but before it does the adults are quite protective about it! Once I managed to sneak near enough to take a photo but I wasn’t allowed many – one huge WHOOOMP of wings from right above my head sent me running. Even a small raven is still a huge bird and I’m taking no chances with one as bold and large as we’re talking here. 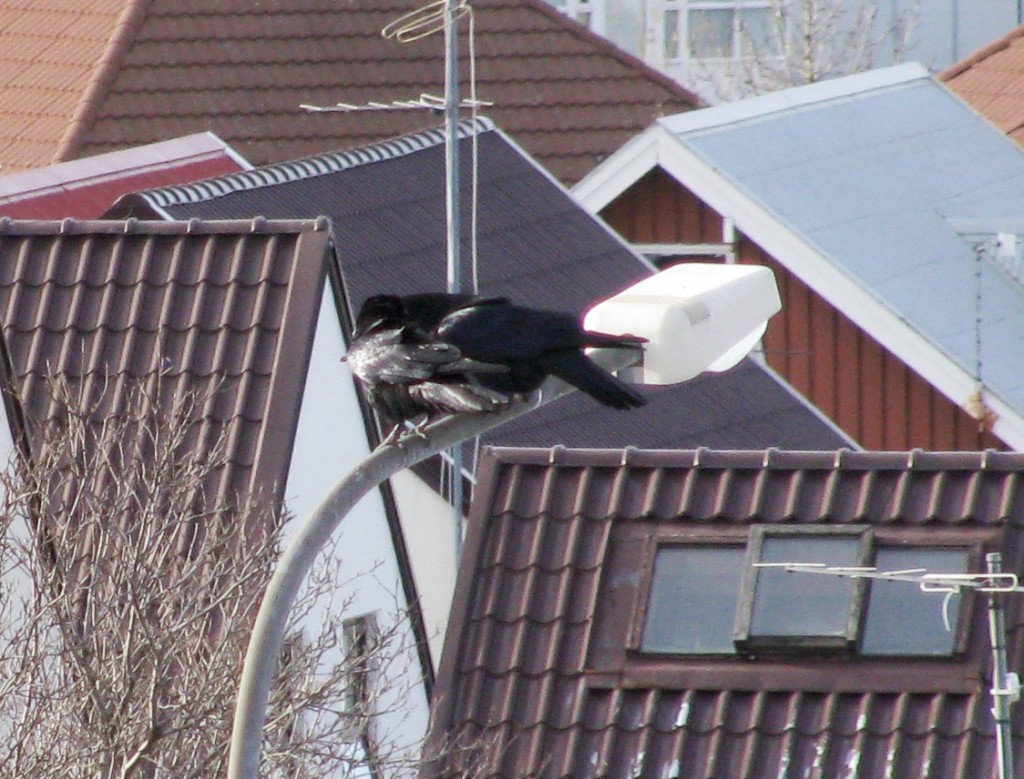 Our resident ravens having couple time. Get a room!

We’ve met before that, in fact. During my first year here I once made the mistake of leaving a garbage bag outside, unattended for  two minutes, and when I came back the big one had already dragged it across the front yard with what I can only describe as a hopeful gleam in his beady eyes. He didn’t even have to do that – the neighbourhood feeds him anyway, as Icelanders often do.

Here’s a traditional song about the ravens. Somehow the joyful melody and the translation of the lyrics don’t seem to quite match! 😀

The raven sings outside
calling its namesake:
“I found the head of a ram,
a rib cage and skin.
Come now and pick it with me
raven my namesake.” 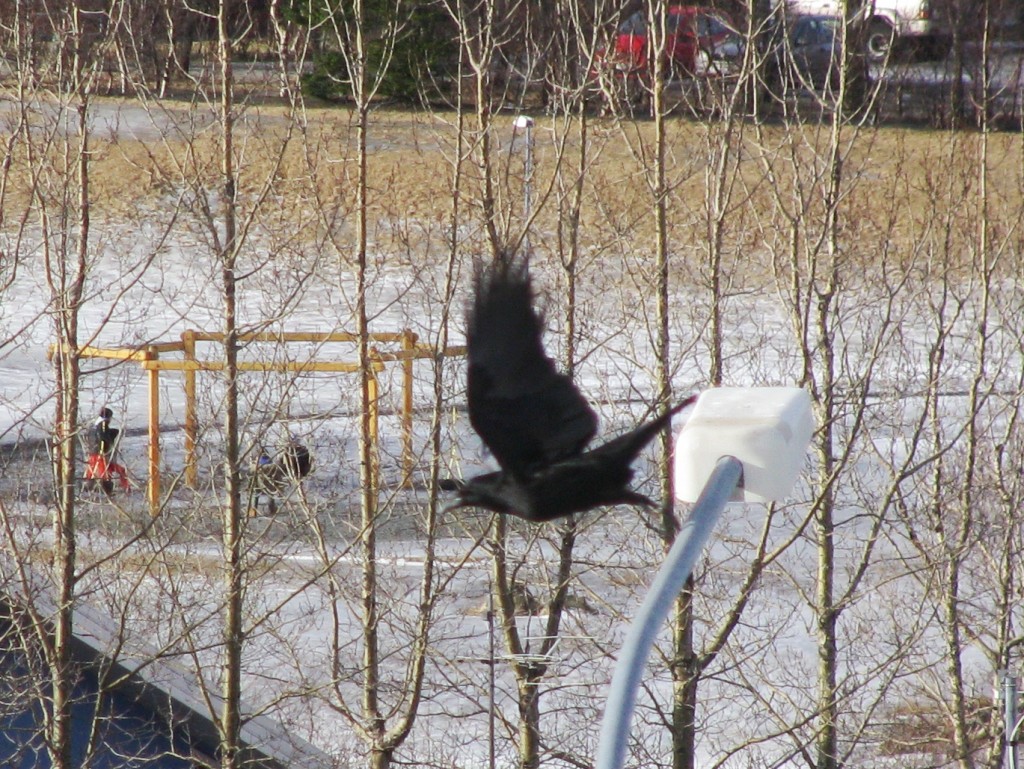 Early spring, children and a raven.

Að krunka: to make the sound a raven makes – yes, there’s a specific verb for it in Icelandic. 😀

Að kalla á nafna sinn: this one confused me at first because I read it too quickly and thought the word was nafn (= name). What gave it out was the gender of the pronoun that follows it, because while nafn is a neuter, nafni (= namesake) is a masculine. A neuter form for sinn would have been sitt.

Gæruskinn: sheep skin that still has wool on it.

Að kroppa: to pick, or possibly also to peck.

Also whenever the raven is singing to its namesake it’s simply singing to another raven. They’re all called the same. 🙂

By a curious coincidence I wrote about ravens here almost exactly two years ago, so if you want to know more about them and the effect they’ve had on Icelandic culture and daily life go check Autumn is here and so are the ravens.