Skugga-Baldur, or Blue Fox; a book by Sjón. Posted by hulda on Oct 31, 2014 in Icelandic culture, Icelandic history 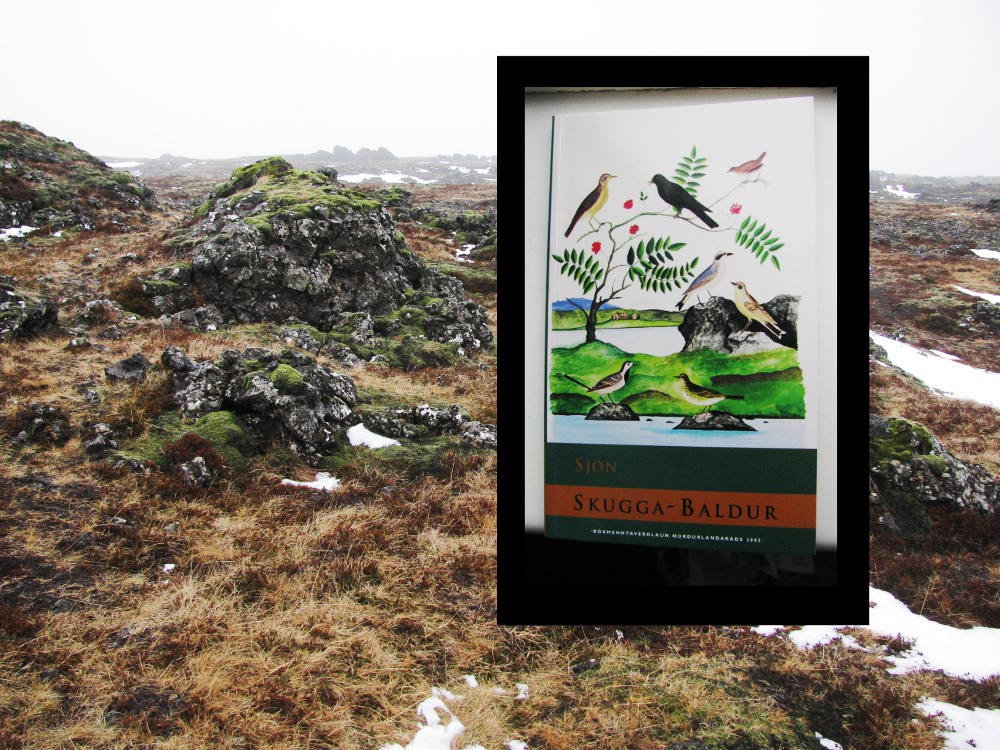 Did you ever read a translation of a great book that, while a good one, was lacking a key element simply because some part was entirely untranslatable? Or even better – ever read the translated version and felt a bit smug in the knowledge that you had that key element already in your back pocket and were therefore miles ahead of other readers that were relying on the translation?

Blue Fox by Sjón, or Skugga-Baldur as its name is in Icelandic, is a book so amazing that I wish that if you could in all your life read only one Icelandic book it would be this one. It’s quite short by amount of text but the language itself is poetic, packed so full of meaning that every short burst of text deserves the reader’s full attention. It won’t take long to read but after you’re done I wouldn’t be surprised if you felt like re-reading it right away with all the knowledge that you gathered on the way. It’s simply magical, and I hope those that have read it before won’t bop me over the head for making that silly pun. 😀

Skugga-Baldur tells the story of three people at the end part of the 1800’s Iceland. There’s father Baldur Skuggason, a local priest, wealthy and well respected within the community. There’s the herbalist Friðrik B. Friðjónsson who originally came to Iceland only to tie some loose ends and never planned to stay, also known as Grasa-Friðrik (= Grass-Friðrik). Lastly there’s Hafdís Jónsdóttir, a woman whose fate begins, carries on and seals the story. Allt breytist – ekkert hverfur: everything changes – nothing disappears.

In fact her appearance into the story is nothing short of suspicious when all details are put in place. She’s found on board a ship that seems like it has no crew in it what so ever, all alone, chained to a wall and heavily pregnant. There are no details on who she is and where she came from, and of course poor Hafdís herself cannot exactly explain what happened to her for reasons that later on become clearer. Not even the ship can be identified properly, it’s old and worn and only the letters “… Der Deck…” on its side and “V… …r ….ec…” on the other can be read. I’m assuming the fans of classical literature to be jumping up and down at this point and yes indeed, I share the suspicion of the ship’s origin and the reason it’s sailing alone.

She gives birth soon after and kills the child, and is then found by Friðrik who promises to watch after her and let her stay with him. Hafdís is not her real name either for the simple reason that people don’t seem to understand her when she tells them her name. Instead she gains a new official name, which coincidentally means “sea goddess”, but for most of the time the reader will know her by another one – Abba.

(As an additional detail calling someone Jónsdóttir or Jónsson is akin calling someone “Smith”, a name that tells you absolutely nothing of the person carrying it, often used for people whose parents were not known. If you come across a Jón Jónsson in historical records chances are that either that really was his name, or, that his real name was not known and he was written down with the Icelandic equivalent of John Doe.)

These three people whose fates twine among each other’s in complex and cruel ways are each unpredictable in their own style. Not one of them is quite what they seem to be in the beginning and the reader soon finds out that innocence is something that’s hard to measure and that you’ll only lose it if you let it go, and similarly that humans can sell each other really cheap. Naturally there’s also a fox in the story, but what and who the fox represents is also a surprise.

What about the part that I mentioned right at the beginning? The untranslatable piece that withholds a key element from anyone who doesn’t know Icelandic, nay, Iceland itself well enough?

It’s the title. Skugga-Baldur is no blue fox although it’s understandable why the translator chose the title they did. Skugga-Baldur is a monster of Icelandic lore, half cat and half fox, a beast that’s as smart as a human, capable of plotting your death even after you’ve first managed to kill it. It’s powerful, ruthless, eats pretty much anything that it can catch and can, according to some myths, kill you by looking at you. You don’t have to meet its eyes as with basilisks, all that’s needed is that it sees you there and you’re a goner. Its looks are something straight out of uncanny-valley where you don’t quite recognize what you’re seeing but know by instinct alone that you want to be far, far away from it immediately. It’s knowing this that will set you the story in a completely different, merciless light and tell you something else, something different and far more rich in content than to those who lack the information. Know the beast and how it operates and you won’t be fooled by it because, alas, most people who read the English translation will be.

More about Skugga-Baldur and its equally awful half-sibling Skoffín here.