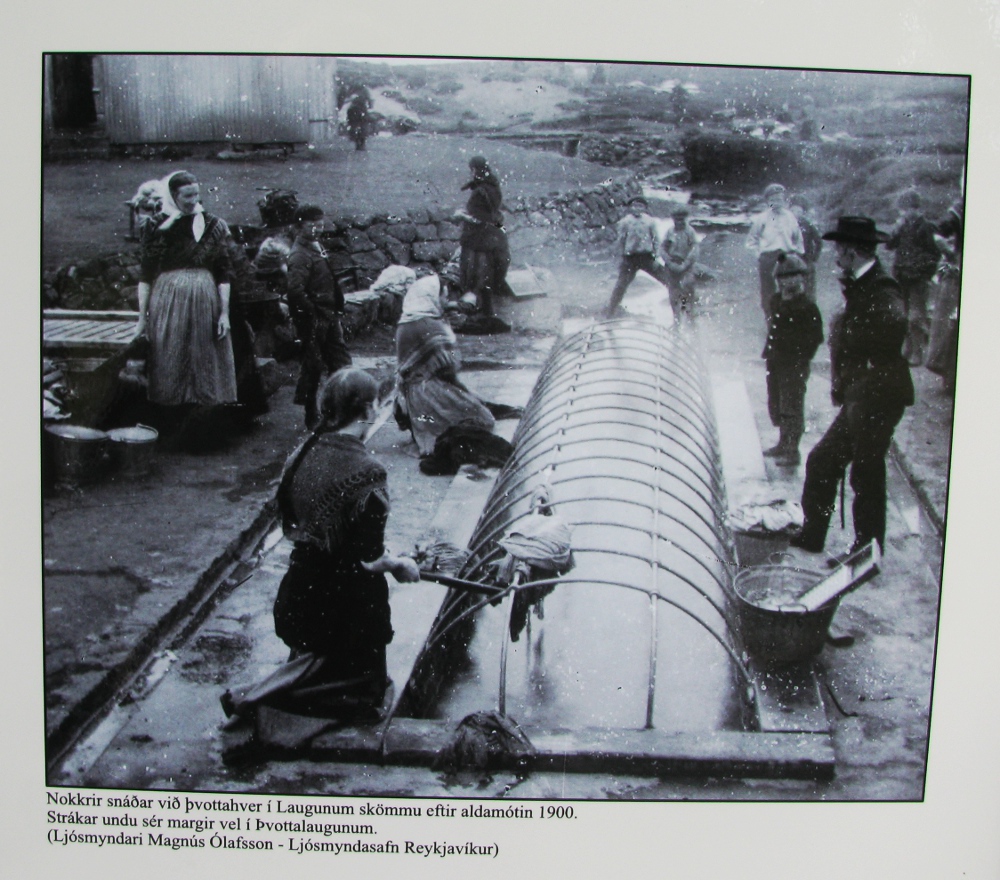 Near downtown Reykjavík is a historical site that’s almost hidden by all the other activities around it, though the whole area takes its name from this place: Laugadalur, the valley of hot springs, is now better known for the Botanical Garden, one of the best swimming pools of Reykjavík, an ice skating rink and a zoo than of the springs themselves. Perhaps it’s better that way. 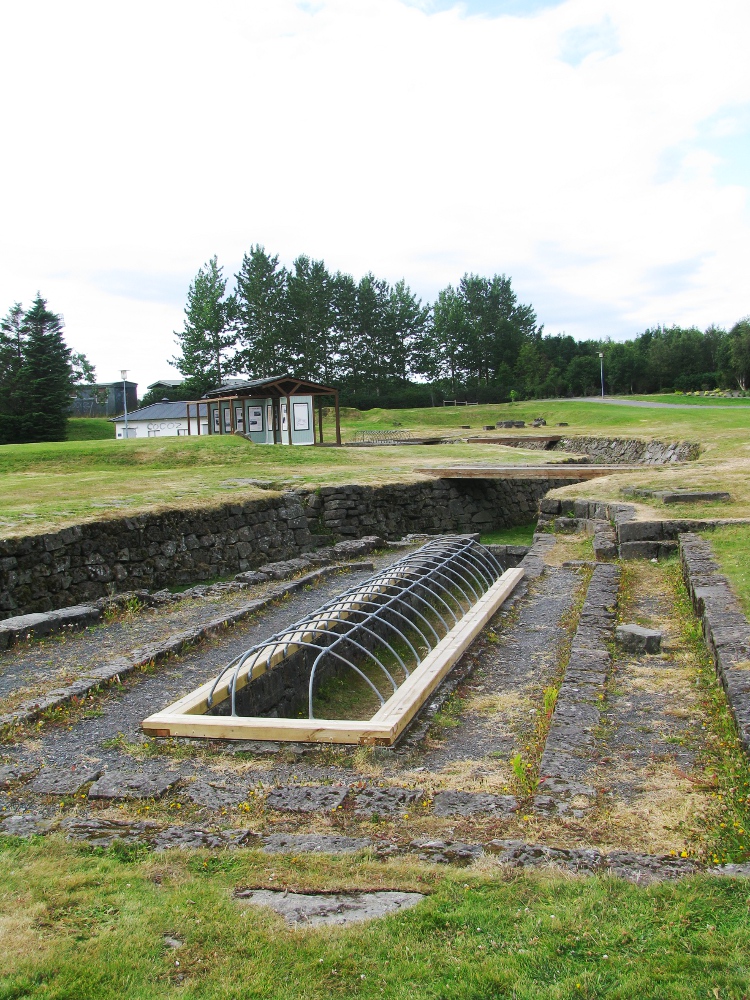 This is how the place looks like today. Quite a change to the first picture, right? No more washer women, no more steam, just one little building dedicated to the long history of this site and a filled up hot spring area. I find it’s a good thing that it’s filled up, let me explain the basics… 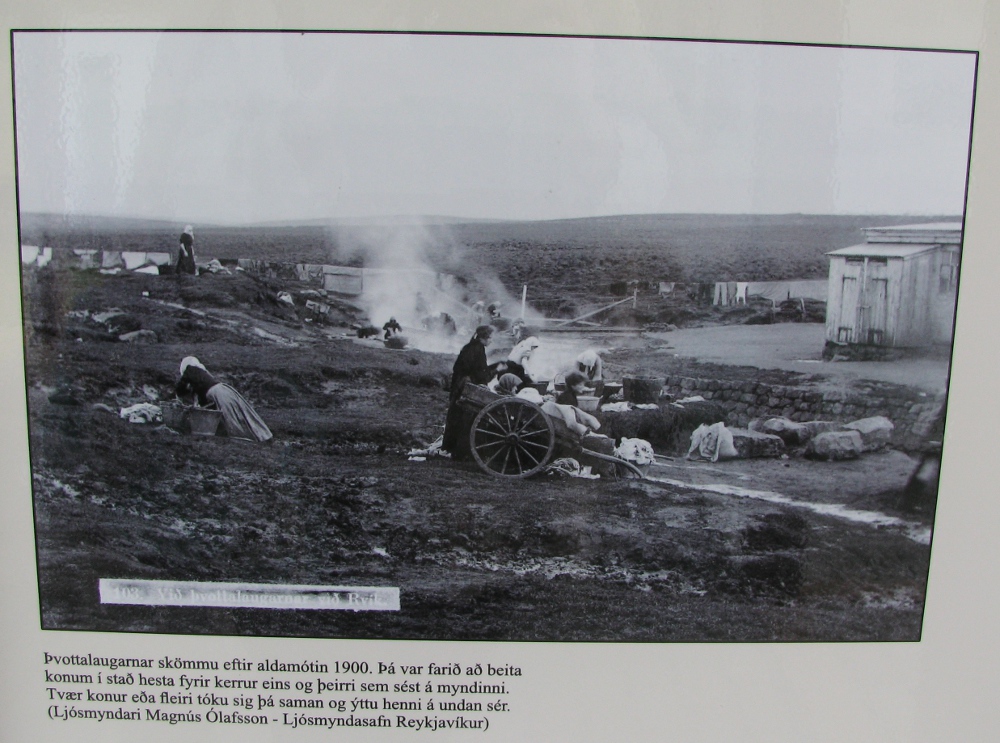 First of all, Laugadalur was not just a random laundry washing area. It was the poor people who came here to wash their laundry in the free, hot water, that would otherwise have been a luxury far out of their reach. They often washed more than just their own laundry, working as washer women for the rich houses downtown. The text with the picture above explains that women pulled laundry carts instead of horses, two women for each cart. Those who didn’t have that opportunity carried the laundry in large baskets or buckets strapped to their backs and neck. 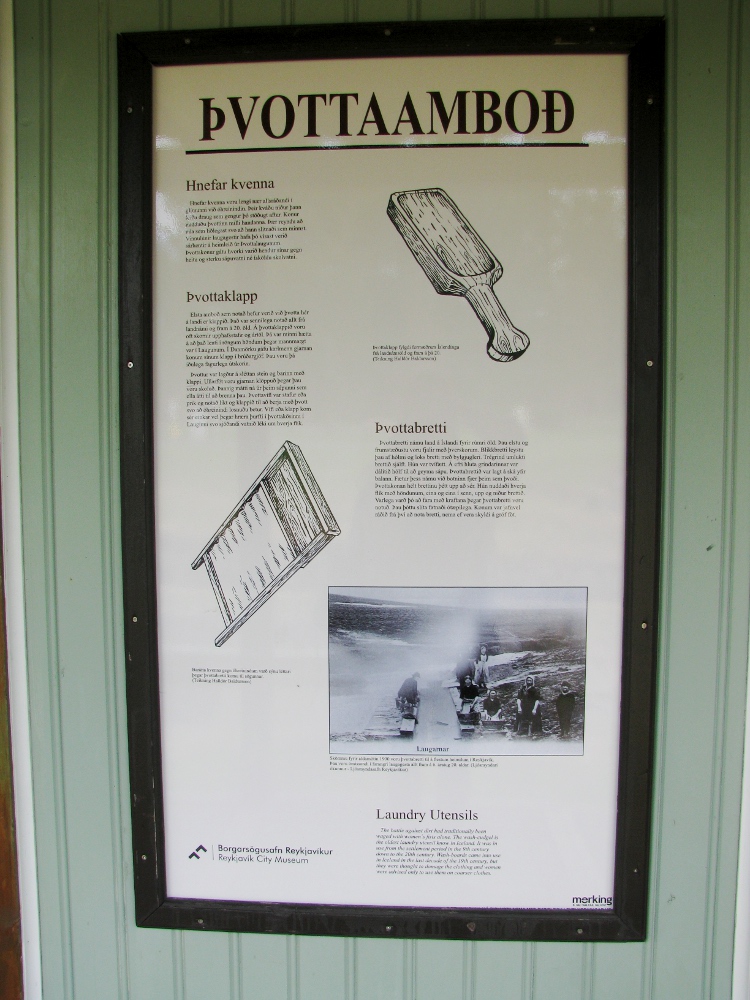 The work was hard and paid very little, as is typical for washer women everywhere in the world for all history. Besides that it was a year round job no matter the weather, be it sunny, stormy or snow, all the laundry had to be brought from several kilometres’ distance and in the winter most of the work was done in almost absolute darkness – Laugadalur did not have lights until very recently in history. 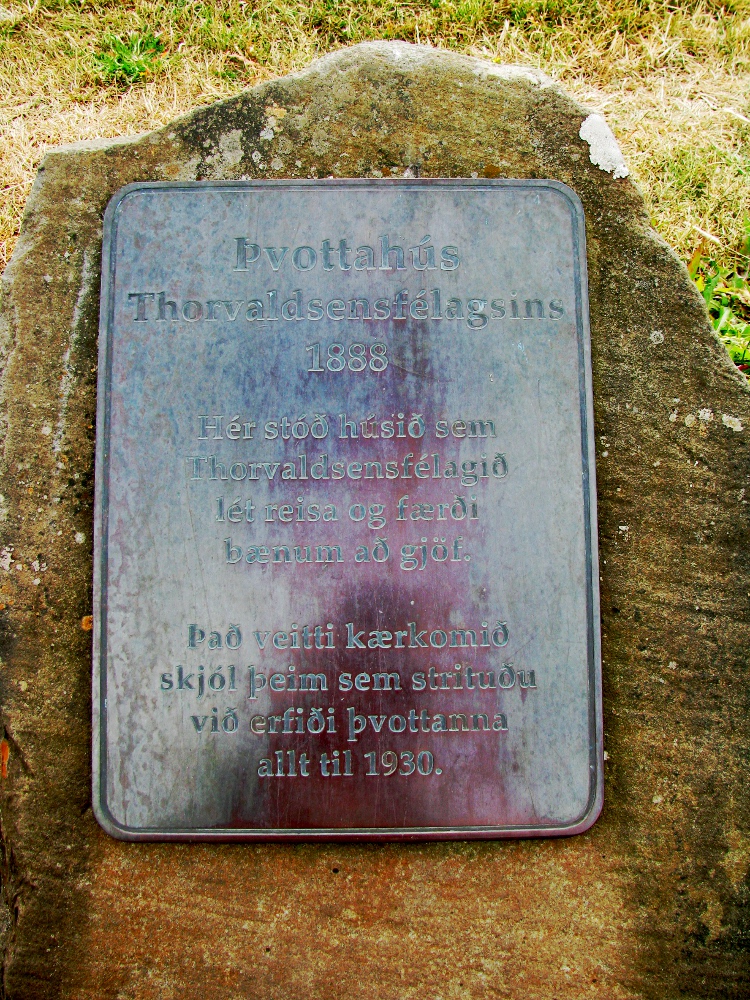 Washing house of the Thorvald-group, 1888. On this place stood a house that the Thorvald-group let build and gave to the city as a present. It offered blessed cover for those who toiled here washing laundry up until 1930.

The house this memorial plaque is for is gone now, but no doubt the washer women welcomed the opportunity of having a shelter from the weather! 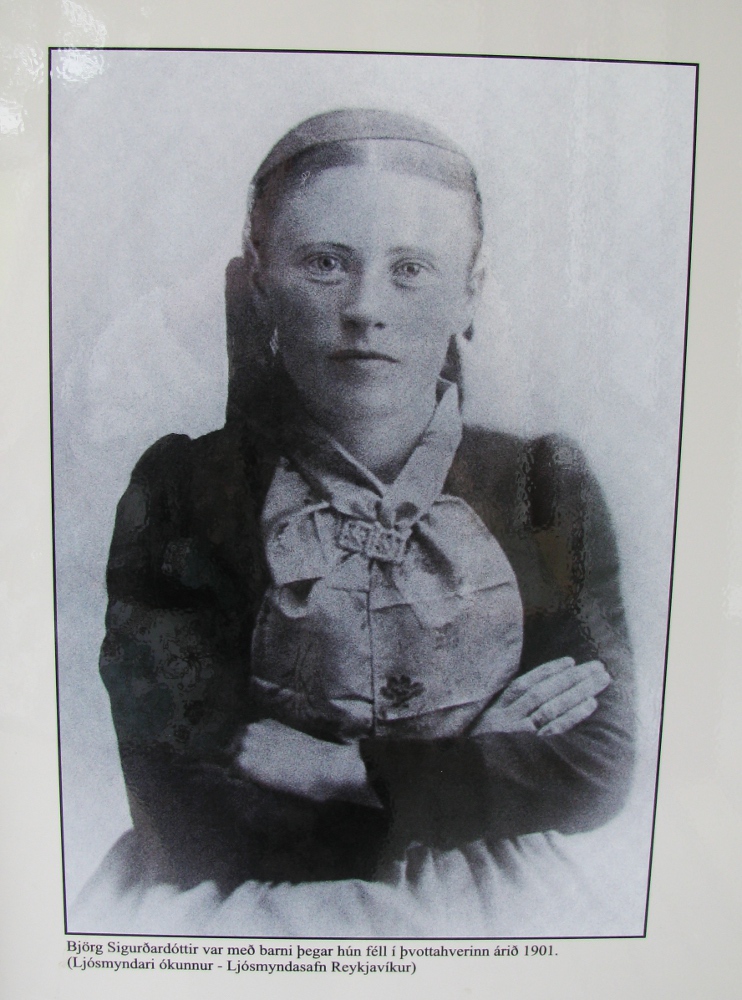 Björg Sigurðardóttir, a 27 year old washer woman, looks at you from one of the info signs with haunting eyes. Not long after this photo was taken she was dead, gone in the same way as so many other washer women before her – by falling in the spring.

Laugadalur springs were natural springs and the temperature of the water was close to boiling. Every now and then a woman would accidentally slip, especially in the winter when the ground was icy, and fall in the water dying either by drowning (weighed down by laundry baskets tied to their backs) or of horrible burns. Children fell in the springs too – it was technically speaking banned to bring children in the area particularly because it was so dangerous, but a poor woman really had no choice in the matter. Besides children were often put to work alongside their mothers and a girl of 14 was already considered a washing woman, fully learned and capable of doing her own work. According to one sign a popular sport for the children was to jump over the ditches full of boiling water… 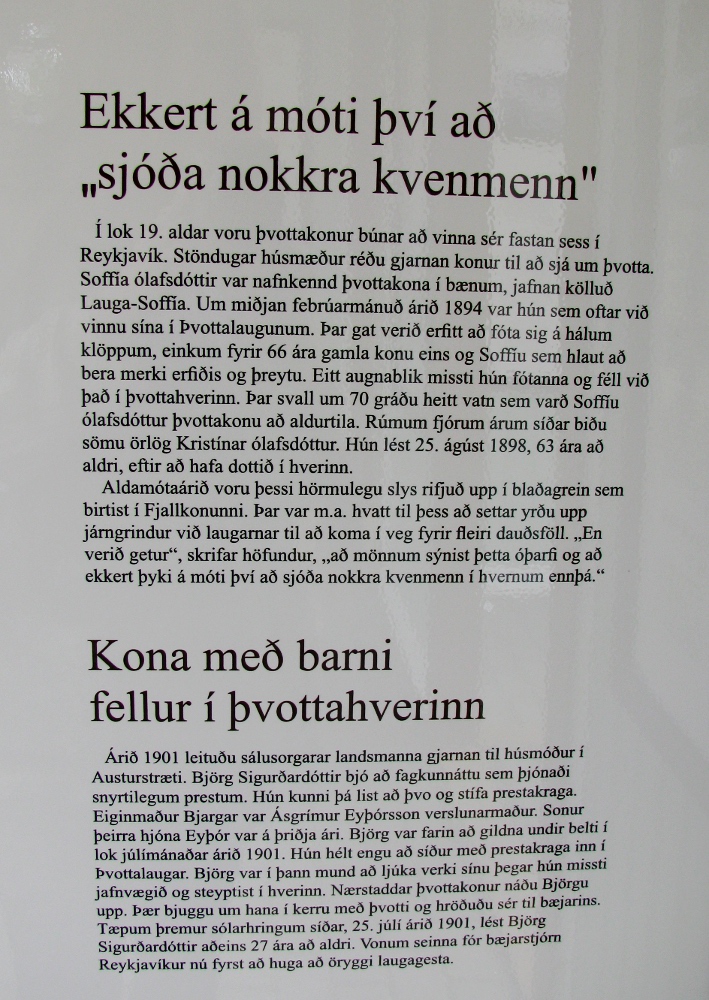 “Nothing against boiling a few more women alive” says the title. It comes from an angry article in Fjallkonan, a newspaper, where the author expressed their anger that nothing had been done to stop people from falling in the springs. Later on a series of metal arcs was put over the spring, probably much to the relief of the author who ended their article with a pessimistic note: “But it may be that people find this (the ironwork) unnecessary and see nothing against boiling a few more women in the springs.”

The answer to why the iron grate was finally made may be in the sad fate of Björg. Before her the two previous victims had been old women, and awful as it is people don’t see such accidents as striking as the loss of a woman age 27 who was also pregnant at the time of her death. To add to the tragedy she had a husband and a three year old son, and she worked as a specialist washing up and starching priest collars. That was what she had been doing on the day of the accident as well and was already finishing the work when she slipped and fell into the spring. A nearby washer woman helped her up, she was put on a laundry cart and wheeled several kilometres home downtown where she died three days later. No wonder that an accident like this shook the city of Reykjavík sufficiently for the safety irons to appear. 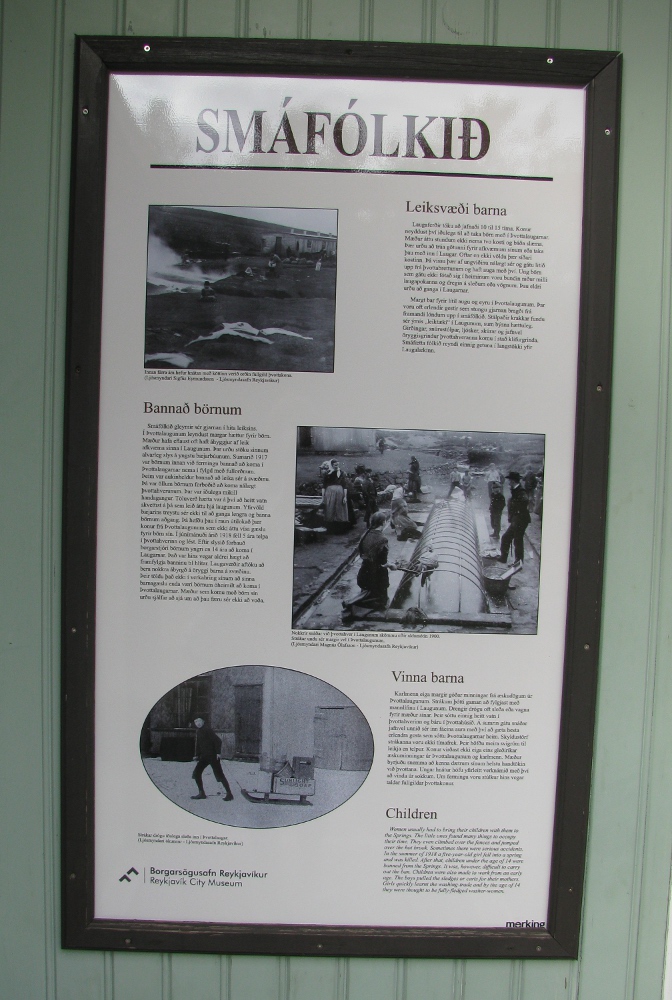 Children (= small people) says this sign. It describes both children at play and child labour, and how the ban on bringing children to the area was useless.

This is why I find it good that the pools of hot water are gone, they were dangerous and horrific accidents were all too common in Laugadalur. After reading through all the info signs I wanted to hug and kiss my washing machine out of sheer happiness that the days when this kind of work was a necessity for the poor were behind. The grass that now grows on the bottom of the spring pools marks, perhaps better than any memorial or info sign ever could, that no one needs to come here to risk their lives daily anymore. 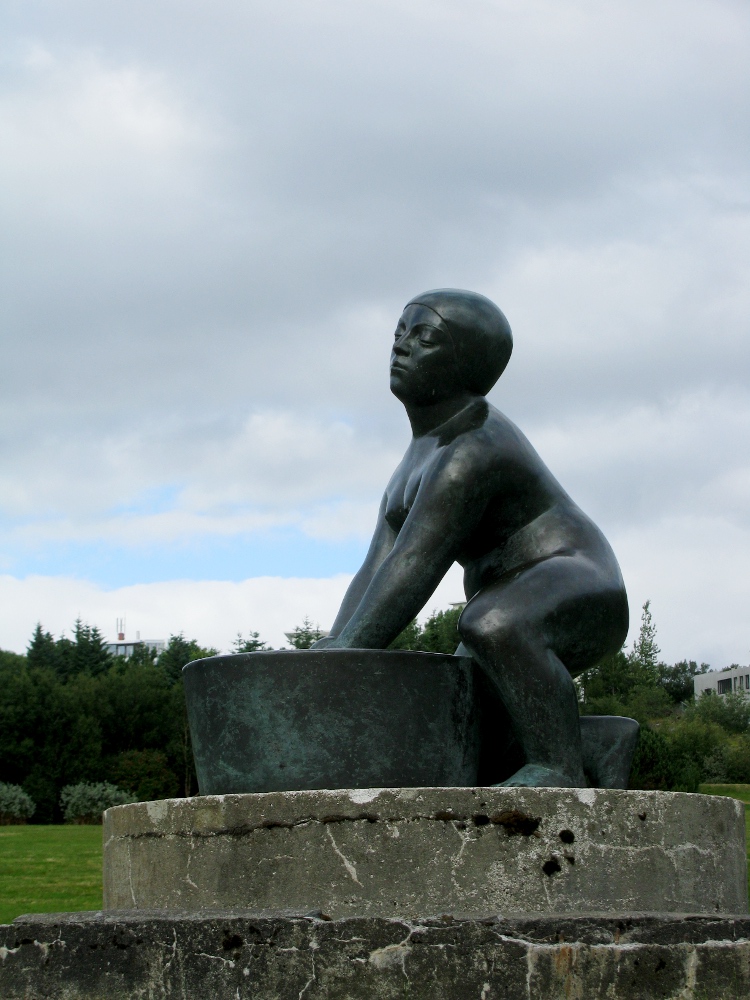