Maumere Posted by sasha on Apr 11, 2016 in Uncategorized

Last month, we took a look at what you can do with two weeks in Flores, and now we’re going to dive in a bit more to the destinations covered in that post. Maumere is the biggest town in Flores, yet it still feels like a small fishing village. It’s a good place to start or end your trip to the island as there’s an airport with flights to and from most places in Indonesia. 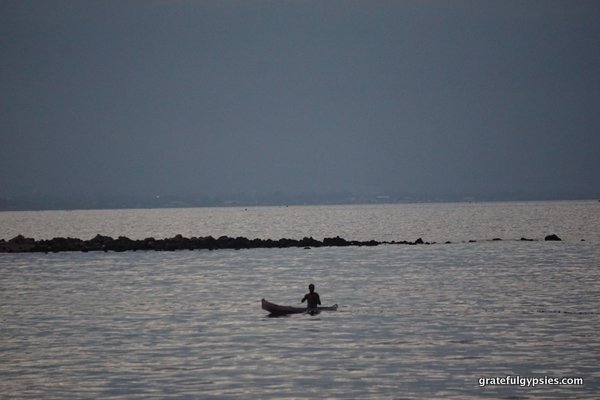 The town itself isn’t much to speak of, but there is beautiful coastline 20 to 30 kilometers east of the town. We flew from Bali to Maumere where we stayed for five days. We stayed in two different accommodations and enjoyed some outdoor activities. Here’s a little run down of our five-day stay: 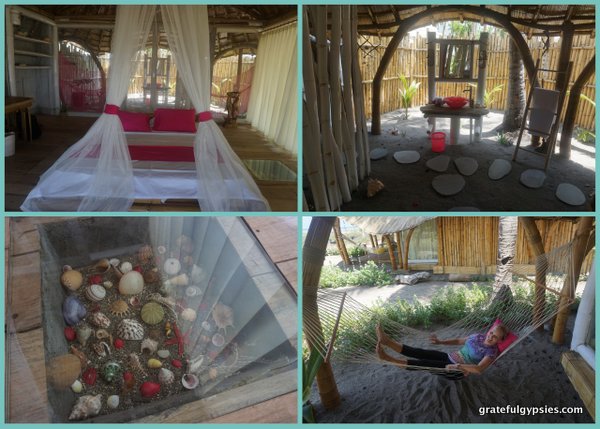 Our first two days were spent relaxing at the brand new Coconut Garden Resort – an eco-friendly guest house right on the beach – that just had its soft opening in January. Only half of their bamboo bungalows were finished when we were there. The bungalows are beautifully designed with lovely seashell decorations. The front porch has a few chairs and a hammock for relaxing and admiring the surrounding beauty.

This may be paradise.

In addition to the bungalows they also have ‘backpacker’ rooms meant for the budget traveler. They are small and simple with a bed, mosquito net and fan and use a shared bathroom. In the future they plan to have horse stables as well as a gym. 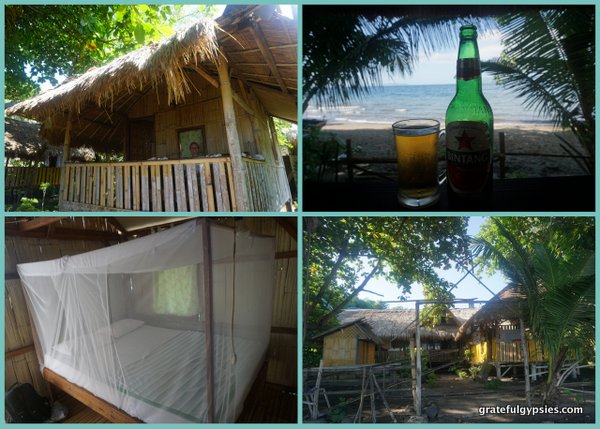 The super chilled out Lena House.

Next we moved to Lena House for three days. Owned by incredibly friendly locals who always strive for Triple C (clean, comfortable and cheap), this was one of the first guesthouses in the area. They have three very simple bungalows right on the beach.

At high tide the water comes all the way up to the bungalow. Every evening during our stay, the local kids all ran out to play in the water around this time. They would take turns jumping off a little concrete slab out in the water, and were just having so much fun. We thought about kids at home – who have so much and yet are always complaining – and compared them to these kids who have very little yet enjoy life so much. 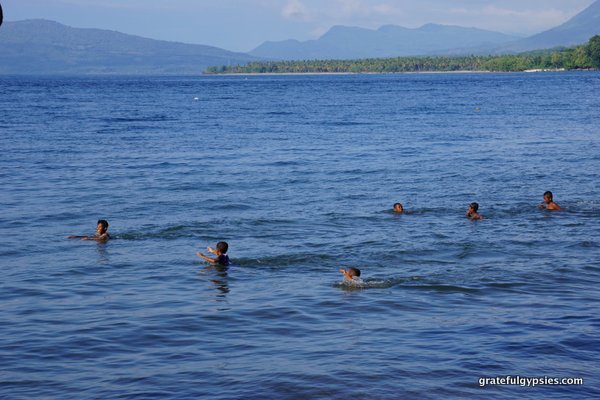 The food at Lena House is delicious, with fresh fish always available. Those seeking more of a Robinson Crusoe vibe will feel at home here. 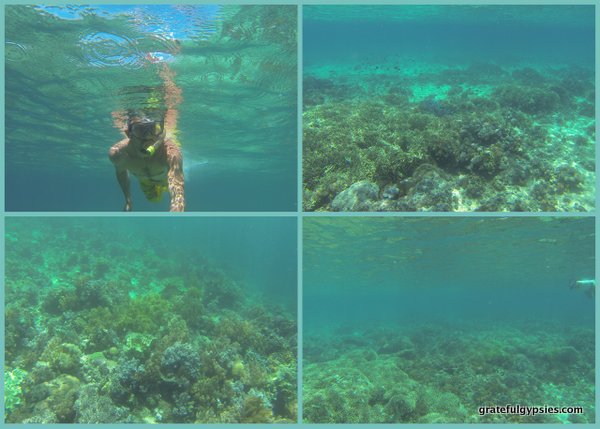 A day of snorkeling.

Back in the day (more than 20 years ago), Maumere was a top diving destination attracting dive enthusiasts from all over the world. Unfortunately in 1992 there was a massive earthquake that triggered an even bigger tsunami. It claimed many lives, ripped up all the coral reef in its path and ultimately ended tourism in the area. Now the coral is slowly coming back and so are the divers. 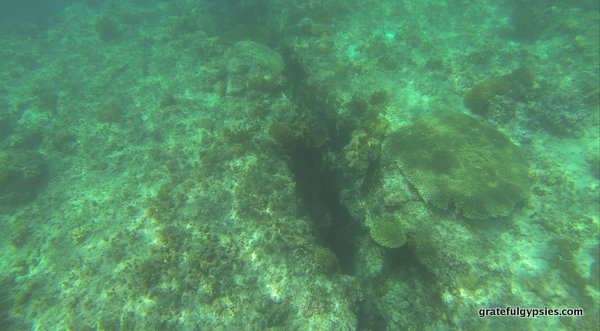 The spot where the earth cracked.

Snorkeling is also an option. We went on a day-long snorkeling trip and were able to see where the earthquake literally cracked the earth. There’s probably nowhere else that you could see such a sight. 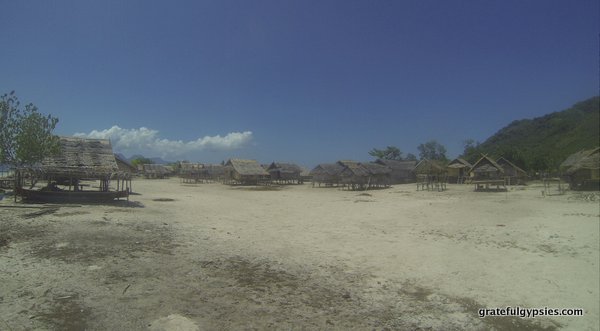 Tiny village on the Pig Island.

The snorkeling trip also took us to Pulau Babi (Pig Island) which has a very small Muslim population of fisherman. While enjoying our lunch we got to watch a lady give her goat a bath in the ocean. Now that’s something you don’t see every day! 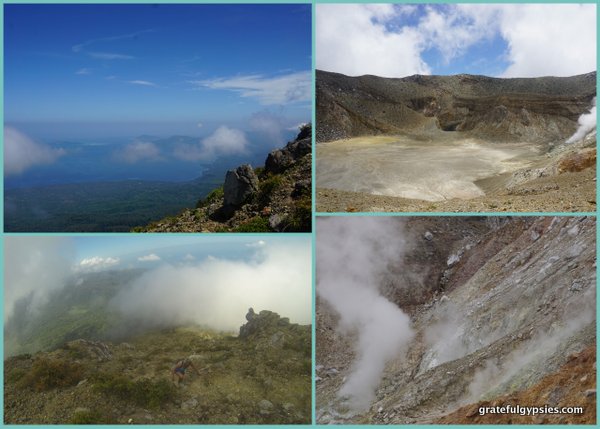 For people who love a good hike, there is a volcano 28 kilometers from Maumere. Rising 1,710 meters above the sea is Mt. Egon. Climbers are treated to beautiful views of the ocean and surrounding areas. It is very active and the smoking crater at the top sounds like a geyser. Anyone from the nearby guesthouses will drive you to the start of the trail on their motorbike. It’s possible to do it without a guide. The trail is marked by small rock piles but they can be easy to miss if you’re climbing after a storm as we were. There were a few times where we lost the trail but we managed to find it again. It took us about three hours to climb up and just as long to go down as most of the trail is slippery rock. 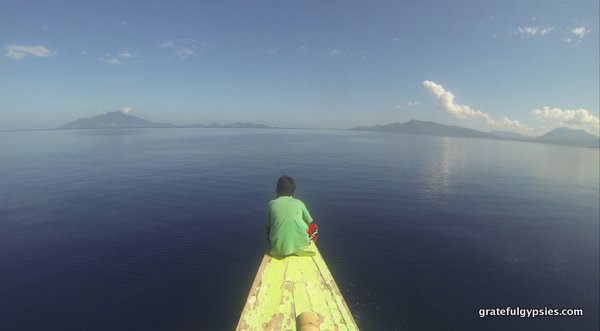 The open road… or sea…

Those with extra time could continue east and visit the town of Larantuka, which is famous for its massive Easter procession. We opted to head west and keep our trip in a straight line. Next up is the small town of Moni, where you can take in the sunrise over the three colored lakes of Mt. Kelimutu.