Temple Hopping in Bali Posted by sasha on Jan 27, 2017 in Uncategorized

Known as the Island of the Gods, Bali is home to thousands of temples (pura). Every village in Bali is required by law to construct and maintain at least three temples. In addition, most homes have a temple of some sort. As a result, you don’t have to walk very far to find a temple in Bali. Visiting the temples is a vital part of Balinese culture, whether it’s putting out the daily offerings or participating in a major ceremony. No trip to Bali is complete without visiting at least a few of the island’s most important temples. Here are a few to get you started. 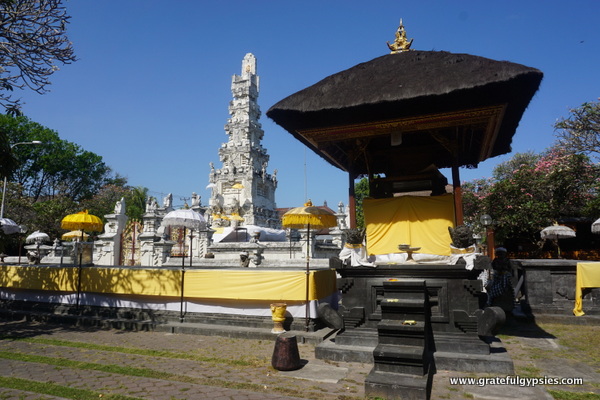 An important temple in the capital.

Our journey around the many important temples of Bali begins in the island’s capital of Denpasar. Right next to the Bali Museum, you’ll find Jagatnatha Temple. Built in 1953, this temple is dedicated to the supreme god – Sanghyang Widi. This makes it unique from many temples on the island, as Balinese Hindus believe in and worship many gods. This temple – and all of Denpasar, for that matter – is not very popular with tourists. If visiting, don’t be surprised if you have to find someone to open it up for you. An admission fee is not charged, but it’s common courtesy to leave a donation for the temple if someone lets you in and shows you around. 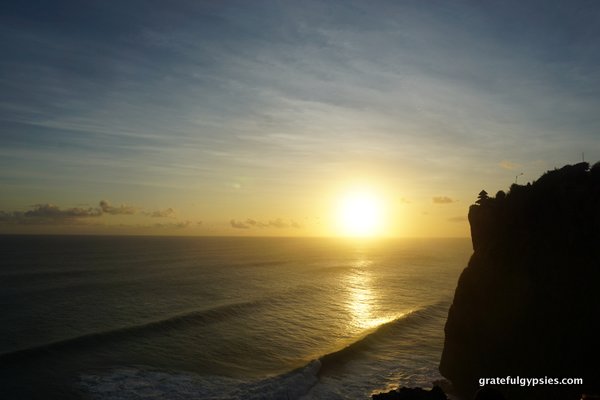 One of Bali’s sea temples (pura segara), Uluwatu is perched on a cliff 70 meters above the sea. In Balinese, ulu means “top” and watu means “rock” – the temple on top of the rock. According to Balinese Hindus, the divine power of Brahma, Shiva, and Vishnu become one here. It is also believed that this sea temple protects the island from evil spirits. While the actual temple itself is not that impressive as compared with others on the island, the stunning views of sunset make this one of the top ones to visit. That and the temple’s famous residents – a bunch of naughty, naughty monkeys. Hold on to your hat, sunglasses, phone, or camera, as they’re known to snatch them up and demand a trade of bananas in exchange for getting them back. The temple also hosts an amazing kecak performance every night, weather permitting. See some highlights in this short video: 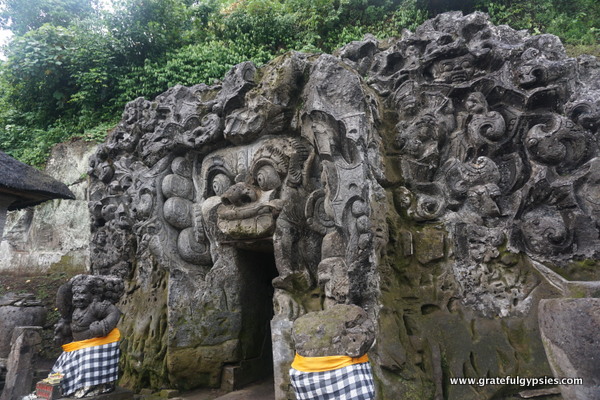 Located near Ubud, this famous temple is commonly referred to as the Elephant Cave. Despite the nickname, you won’t see any pachyderms here. The entrance to the cave is a relief of some creepy, menacing looking figures. Some believed the main figure to be an elephant, hence the name. It could also come from the statue inside the cave of the Hindu god Ganesha. Either way, the temple grounds are beautiful and well worth a visit. There’s a pool with a few statues of Hindu angels, and you can also walk down to the river to enjoy some nice views. Goa Gajah is easily included in a day-trip to or from Ubud. 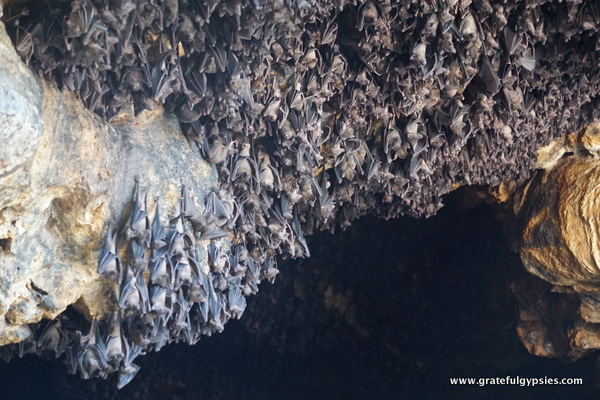 From the Elephant Cave, we head to the Bat Cave. The name makes a lot more sense for this temple – it’s actually home to thousands of bats. There are many legends associated with this temple. Some believe that the cave extends all the way through to the slopes of Mt. Agung. It’s also said that a river with healing waters flows through the depths of the cave. Finally, one legend says that a snake king resides inside of the cave. Located on the east coast of the island, Goa Lawah is easily visited on your way to or from the beach towns of Padang Bai or Candidasa. 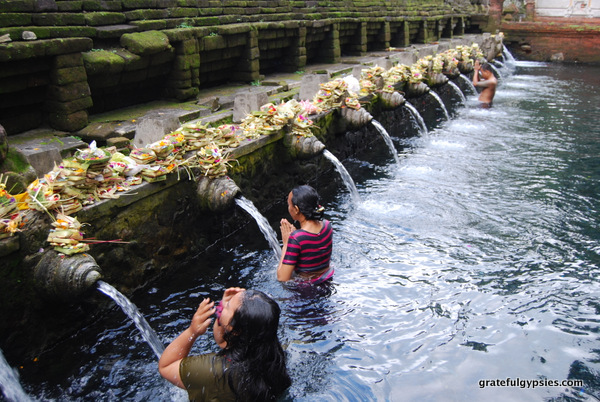 The name of this temple means “Holy Spring” in Balinese. It’s a water temple famous for its holy spring water that feeds a few pools in the complex. People flock here to purify themselves in the holy water. Regardless of when you visit, you’re likely to encounter crowds bathing in the pools. It’s perfectly fine for visitors to participate, but it’s best if you consult your guide or a local friend to ensure you do it correctly. In addition to seeing the springs, make sure you take time to explore the rest of the temple grounds. This temple is easily visited on a day-trip from Ubud, and can be combined with a visit to the ancient shrines at Gunung Kawi. Check them both out in this short video tour: 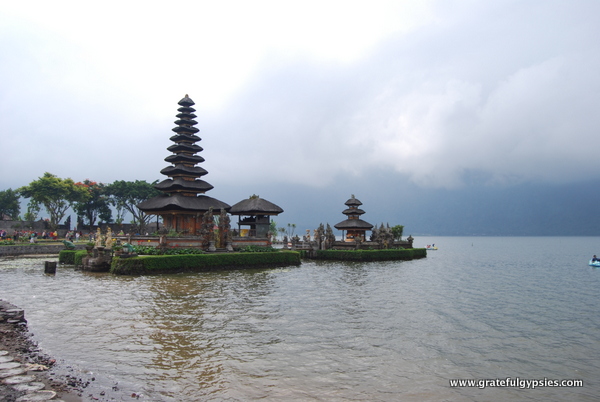 One of the most scenic temples.

This is definitely one of Bali’s most scenic temples, as it’s located on Lake Beratan up in the island’s mountainous center. Built in the 17th century, this temple worships the Hindu trinity as well as the lake goddess, Dewi Danu. Due to its unique location on the lake, part of the temple almost appears to be floating. Coupled with the view of the mountain range, this makes Ulun Danu Beratan an amazing spot for photos. As this temple is a bit far from most tourist centers, it’s best to visit on a day-trip. You can also spend some time on the lake and visit the nearby botanical gardens to make a fun day of it. 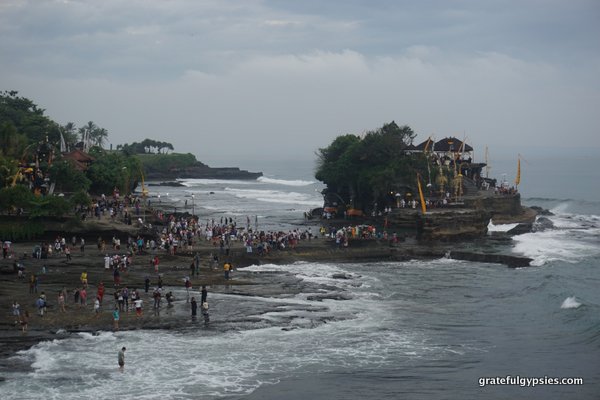 Tanah Lot from above.

Tanah Lot is one of Bali’s most famous and most visited temples, and for good reason. The temple sits on a rock formation just off the west coast about 20km from the island’s most popular beach towns of Kuta and Legian. Due to its unique location, it’s a great spot for taking photos and viewing the sunset. As with many temples in Bali, there’s an interesting legend behind this one. Go ahead and read our post about it with a text in English and Indonesian. See more of Tanah Lot in this short video: 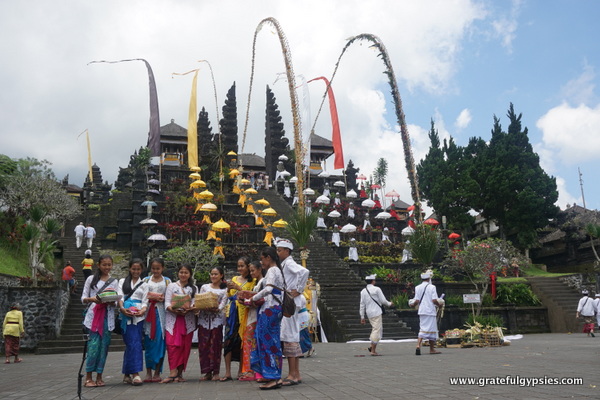 This is the granddaddy of them all – Bali’s largest, holiest, and most important temple. It’s known as the Mother Temple and it sits at nearly 1,000 meters up the slopes of Mt. Agung. Besakih is actually a massive complex of 23 temples, built on six levels. As nearly every shrine celebrates its own anniversary, there are at least 70 festivals held here throughout the year in addition to the big Balinese holidays. That means you’re likely to see some sort of procession or ceremony regardless of when you visit. The main temple is open to visitors, but many of the smaller ones are not, so be careful where you walk. Unfortunately, this holiest of Balinese sites has been home to a large extortion ring, as foreign tourists and Indonesians alike have been told they have to pay fees far greater than the official one required. Many are also led to believe they need to hire a guide just to enter the temple, which is absolutely not necessary. As a result, many travel agencies have taken Besakih off their itineraries. Thankfully, the governor and the police are finally doing something about this, so hopefully the situation improves sooner than later.

When visiting the many temples of Bali, always be sure to dress and act respectfully. Some temples will have sarongs available for you to borrow, but it’s best to just have your own. Balinese people are very welcoming and friendly in regards to tourists visiting the temples, so be sure to treat their holy sites properly. Seeing some of these temples is a must when traveling to the island, as they’re such an integral part of the culture. These are just a few of the bigger temples – you could spend an entire lifetime exploring the many temples of Bali!