The Blue Fire of Kawah Ijen Posted by sasha on Jul 6, 2015 in Uncategorized

Although we were exhausted from our epic trip to Mt. Bromo, there was one more thing we just had to do on Java before crossing over to the Island of the Gods – hike into the volcanic crater of Kawah Ijen to see the famed blue fire. After another long trip with multiple bus rides, we arrived in the town of Banyuwangi late at night. We found a hotel and asked if they could help us arrange a midnight trip to Ijen, which the staff very kindly did for us. Fighting the urge to go to sleep, we stayed up until our ride arrived and headed out on the hour-long drive to reach the crater. Upon our arrival, we were briefed by our guide before beginning the 2-hour hike in the pitch black. While the hike was a bit tough, the real challenge comes when you actually descend into the crater. Attempting to walk down into the bottom of a volcanic crater in the dark of night is no easy task, and we were very happy to have a guide leading the way. Finally, we could see it off in the distance – the bright blue fire. 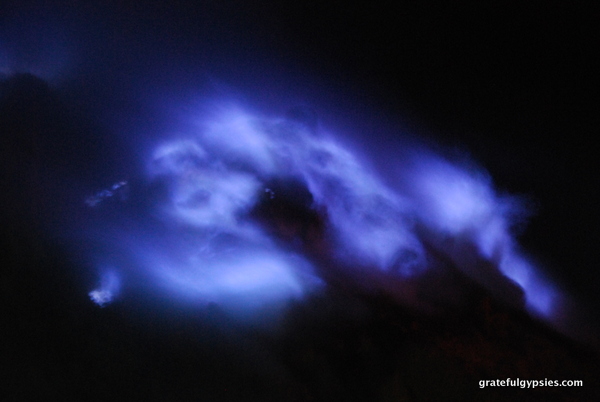 While some mistakingly refer to the blue flames as being lava, they’re actually a result of the combustion of sulfuric gases. The fact that this volcano is rich in sulfur has also led to a substantial mining operation. Every night, miners trek down to the bottom, break the cooled material into large chunks, and carry it back up the mountain and down to a village. Doing this twice a day nets them around $10, which is actually a decent rate of pay for the area. The work is quite dangerous, however, and many miners end up having bad respiratory problems from breathing in the sulfuric air on a daily basis. 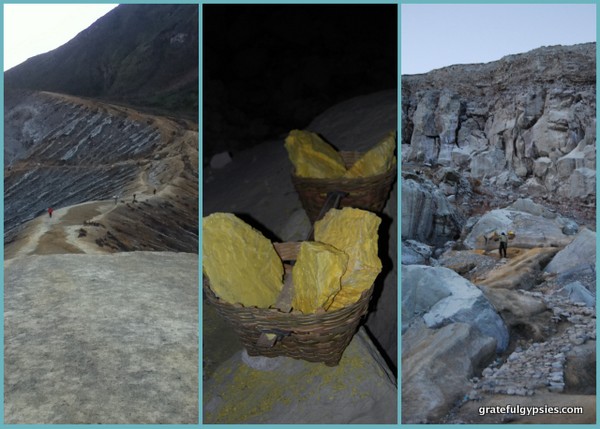 Kawah Ijen is rich in sulfur. 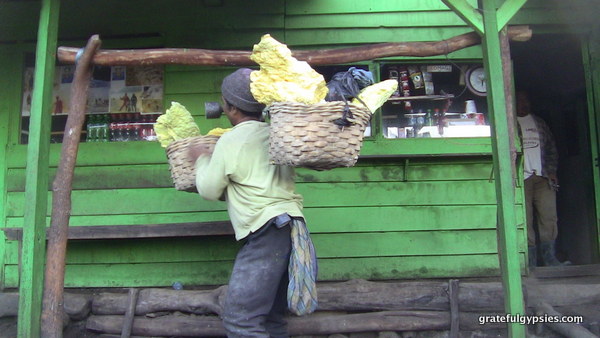 A miner weighs his haul for the day. 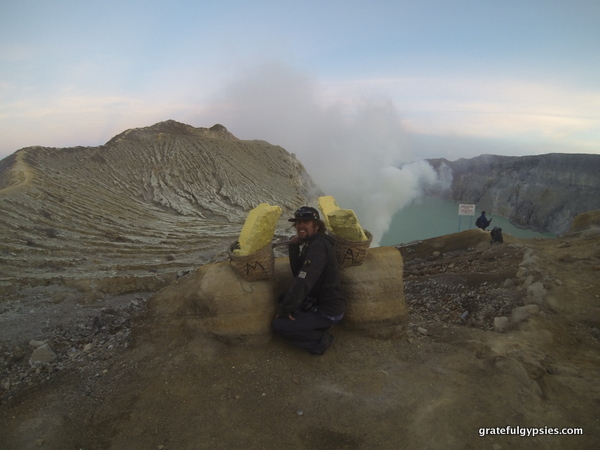 Our guide equipped us with gas masks, but it was still hard to breathe in the bottom of the crater, where strong winds often completely enveloped us in the sulfuric fumes. It was fun doing this trek once, but it’s hard to imagine doing it twice a day, every day. 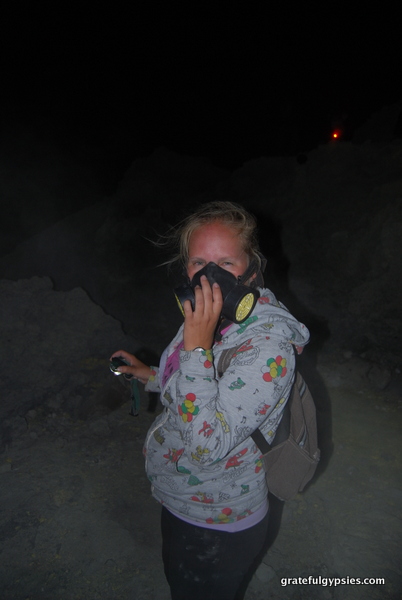 Wearing a mask, which didn’t help much.

While the blue flames are an incredible sight, the fun doesn’t stop there at Kawah Ijen. Once the sun begins to rise, you can take in the beauty of the turquoise crater lake. Apparently, this is the largest highly acidic crater lake in the world. Taking in the views of the lake and watching the plumes of sulfuric gas rise from down below was an amazing experience, and made the whole ridiculous journey worth it. 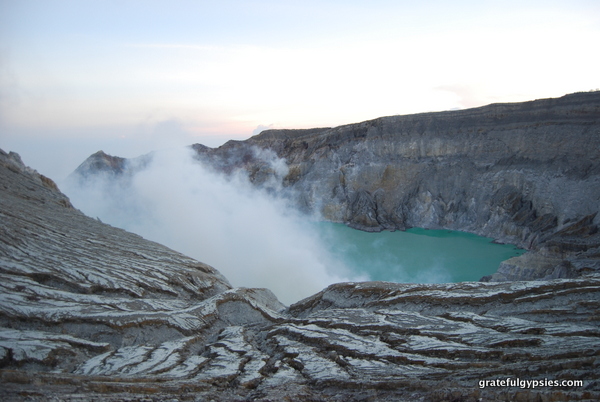 The walk back down was quite pleasant as well, with clouds rolling over the hills creating a dreamlike landscape. While some decided to stick around for sunrise, we were running on empty and ready to finally get some sleep. 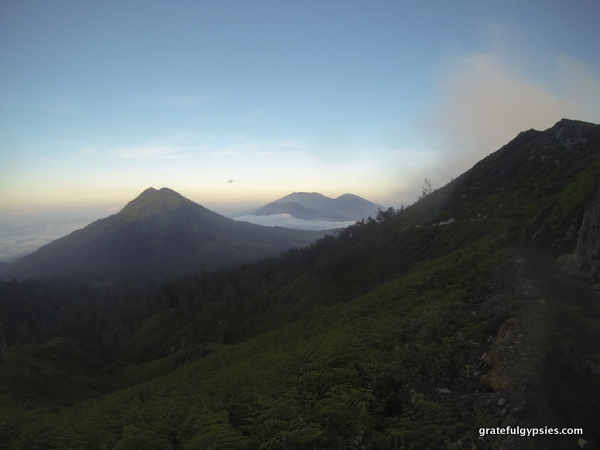 Walking in the clouds. 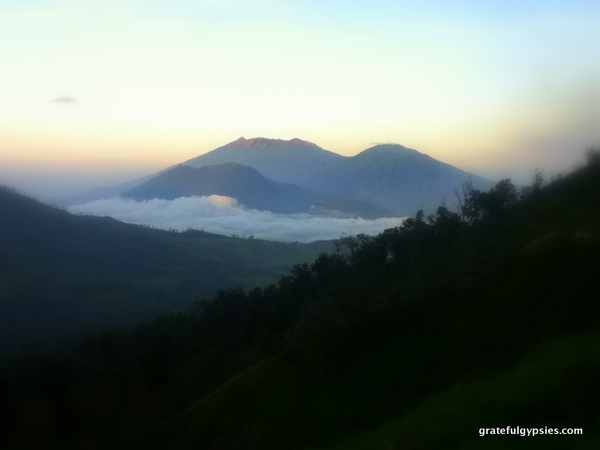 Is this real life?

Back in the town, the folks at our hotel were nice enough to let us check-in very early. It had been an exhausting couple of days, in which we had: taken an overnight train, traversed the Sea of Sand on the backs of motorbikes, hiked to the top of Mt. Bromo, did the sunrise hike there, gotten all the way to Kawah Ijen and trekked down to see the blue fire. For our last day in Java, we were more than happy to sit by the pool, have a few beers, and relax. 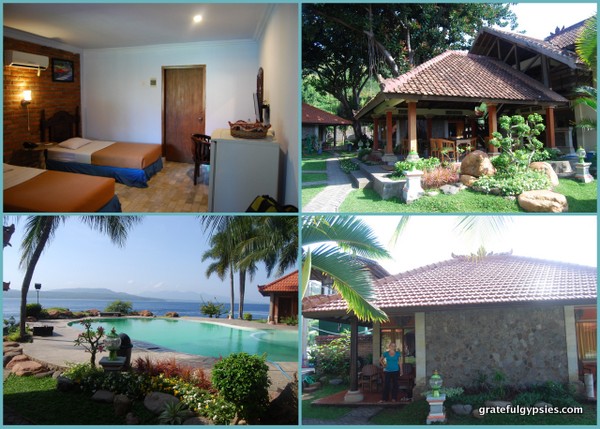 From the pool at our hotel, we could see our next destination just across the water – Bali. It had been an amazing three weeks traveling across Java, but we were excited to get to the Island of the Gods. In the months to come, we’ll have tons of content on Bali, from the beaches, to the rice fields, to the delicious babi guling (suckling pig) and everything in between.