Do you like insects? Personally, I find them fascinating, which is just as well because out in the countryside where we live there are plenty of them!

Some of these creature are present for most of the year. I ragni (the spiders), for example, find our rustic stone house the perfect sojourn, constructing their intricate ragnatele (cobwebs) in all its difficult to reach (for us humans) nooks and crannies.

In English we tend to think of spiders as feminine. This may refer to their mythical Greek origins as Arachne, the talented mortal weaver who was so proud of her abilities that she challenged the goddess Athena to a weaving contest. Her excessive pride resulted in her being transformed into a spider! In Italian though, the spider is masculine: il ragno (singular) i ragni (plural) and the web is feminine = la ragnatela (singular) le ragnatele (plural).

You may think of il grillo (the cricket) as primarily a summertime insect. However, another outcome of our living in an old house is that several years ago the local crickets founded a secret colony in some hidden place, which by now we’ve given up searching for. So … we now have grilli all year round. They often hold meetings on the wall above the sink, which leads me to believe that they’re not terribly bright, for those that fall are doomed, unless we happen to spot them before they drown. If I manage to extract one alive, I pop it out of the window … but it doesn’t seem to matter, their population never diminishes. 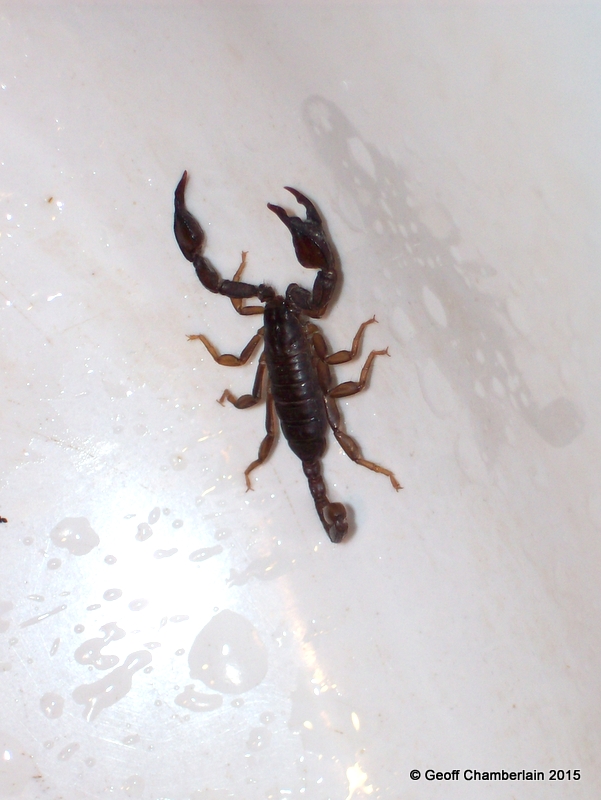 Gli scorpioni also seem to have a penchant for our kitchen sink!

It took me a while to get used to gli scorpioni (the scorpions, singular: lo scorpione). They don’t exist in the wild where I grew up in England, and my only knowledge of them came from adventure films and comic books set in the desert, where you always had to shake your boots before putting them on in the morning. One day, Serena and I walked down to the village car park, and when we got there, she said: “Hang on, I think I’ve got something in my boot.” She took her boot off, and what should fall out but … yes, you’ve guessed it: un bello scorpione, assai schiacciato! (a lovely, somewhat flattened scorpion!)

Last, but not least are the big hairy Mediterranean centopiedi (plural: i centopiedi, singular: il centopiedi). Resembling miniature bottle brushes, these impressive creatures sit up on the walls contemplating i massimi sistemi (the meaning of life) before suddenly scurrying off to their next urgent appointment. And boy do they move! But with cento piedi (one hundred feet) I guess that’s only to be expected.

Next up: Seasonal Insects.