Last time (https://blogs.transparent.com/japanese/a-month-even-a-priest-must-run-part-1/) we talked about celebrating Japanese New Year in the past.  But times have changed.  Many services are open, such as conbini (convenience stores コンビニ) and fami-res (ファミレスfamily restaurants)  like Thanksgiving Day in the US now.  I am sure that the magic of a quiet New Year’s Day must have been lost. And the younger generations (世代  sedai) do not understand the fear of being starved to death of the manga character during the New Year’s holidays.

In 2019, there was a big discussion on a franchise owner of a conbini who had decided not to open his combini store 24/7 without the headquarters’ (本社/本部honsha/honbu) prior approval (許可  kyoka). The headquarters charged the franchisee (フランチャイズ加盟者furanchaizu kameisha) with the breach of contract (契約違反keiyaku ihan), and told him that it would terminate (終了するshuryousuru) the contract.  This has started the huge social discussion – are there any reasons why conbini must open 24/7?   For the New Year’s Day 2020, there were some conbini stores that took a day off with the approval of their headquarters as an experiment.

So what will happen on the New Year’s Day in 2021?  Many major supermarket chains are planning to close for the first 3 days in 2021.  Large conbini chains will be open but they will respect (尊重するsonchosuru) each franchisee’ decision whether to open or not.  For many younger generations, to not be able to shop or get bento during the New Year’s Holidays is something new.  But it was like that 30 years ago.

A couple of years ago, a social movement not to shop on Thanksgiving day in the US has started and some retailers started to close on Thanksgiving Day.  The Japanese supermarket chains and conbini chains report that the New Year closures will be special only in 2021 due to COVID-19.  They cite 1) grocery store employees have been working extra hard in 2020 to service people, risking their own lives, 2) there has been a shortage of workers (人手不足 hitode busoku) in Japan, and 3) the government has been advising people to stay home in order to stop spreading COVID-19. It is ironic (皮肉な hinikuna) that it took COVID-19 to remind Japanese people of the New Year’s Holidays like it used to.

Kohaku Utagassen is no longer the one and only New Year Eve’s program to see.  Each member of a family has a program to watch. Most young people do not want TV any more anyway

As for osechi, Ameba News reports that 56.5% of Japanese surveyed said that they would buy osechi, while 43.5% said that they would cook osechi at home.  Osechi has become international!  You can buy osechi made by famous French restaurants and Italian restaurants as well as famous Japanese restaurants.  They are not cheap (安いyasui). There are many that are over ¥60,000 (US$600).  People are willing to dish out a lot of money on osechi this year as they cannot go anywhere.

Of course, the meaning of the traditional osechi has been lost, but people enjoy more familiar (見慣れた minareta) dishes that they could enjoy eating. 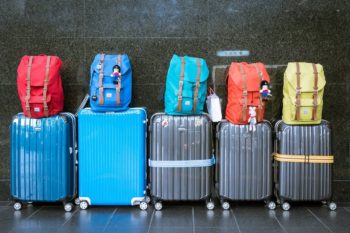 The most significant (重要な jyuyona) change must be the popularization of spending New Year’s holidays overseas instead of going back to their hometown (帰省する kiseisuru). Most popular destinations in the New Year’s Holidays in 2020 were Taiwan, Italy, Spain, and China.  I was seriously surprised that the US was not ranked in the top 10 as Hawaii has been the popular destination for years.

Retailers usually have an extremely popular event called 福袋(fukubukuro – lucky bag) on the first opening day of the new year.  People line up and run to grab one of those bags full of unknown items at significant discounts. This video is from 01/02/2018.

It is a very different 師走 due to COVID-19.  Because of the third wave, according to the Japanese news, restaurants, bars, and izakayas are asked to close at 10 pm in Tokyo with 500 new positive cases every day in Tokyo alone, and over 2000 positive cases nationwide.  And companies told employees not to have parties.  So bonenkai (refer to Part 1) is out, and overseas trips will be forbidden.  Some stores and conbinis will be off.  2020-2021 New Year’s Holidays seems to be a return of the old New Year Holiday somewhat. The most significant differences from the 1980s are that your family in your hometown does not want you to come back from a big city like Tokyo, and shrines ask people to visit throughout 2-3 months instead of the 3 days of New Year.

来年は良い年になりますように！（May the next year be a good one!)