And December is indeed the busiest month. Of course, a lot of parties! Some are obligatory(義務的なgimutekina) ones like office parties and business client parties, but most are truly fun with your friends.  These parties are called “忘年会”(bonenkai, literally forget the year party).  We have to make a reservation for a party quite early, and one person, trusted and responsible, will handle everything – this position is called “幹事”(kanji).

Here is a great comedy video that describes how a Japanese bonenkai goes – please be aware that this is a comedy but it is so true!

Americans face the new year quite a different way.  It is somewhat a jaded(疲れ切った、tsukarekitta) holiday after Christmas.  It is just a holiday, and you work on January 2 as if nothing happened.

When I was a child, you finished your grocery shopping by 12/31 as everything closed for a few days.  There was a manga about a man who almost starved to death(餓死するgashisuru) when he did not do grocery shopping by 12/31.  As I do not like the traditional New Year dish called おせち料理(osechi), I used to buy KFC on 12/31 before everything closed up. As my family has owned a grocery store for about 400 years (obviously, it was not always the grocery store, and it converted back to the liquor store a few years ago) 12/31 was the busiest day.  My parents worked late and had the 年越しそば(toshikoshi soba) with their employees at the store, while my older sister and I had the 年越しそばalone at home with our beloved dog.

Business closed up before New Year’s Eve so that many people in Tokyo could go back to see their families.  Highways, shinkansen, and flights were packed.  Then, we, who lived in Tokyo for generations, could get the city back.

So what are osechi and toshikoshi soba?

Osechi dishes are traditional Japanese New Year foods, and each food represents something. I will have Wiki explain what they are.

The video below describes how to cook osechi. They look tasty but most of the foods are very foreign to children and even to adults  You may want to eat some on the first day out of curiosity, but not 3 days in a row! 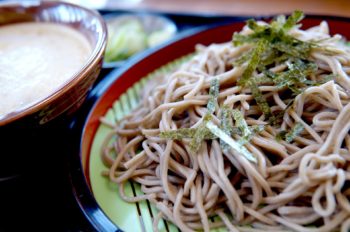 Image by Lawson Yamazaki from Pixabay

Toshikoshi Soba is soba that you eat over the change of years. Soba noodles being long, it represents long life.

Most Japanese spent time in front of the TV, watching 紅白歌合戦(Kohaku Utagassen, a music show) that started in 1951.

At the end of the crazy busy December 31, a big bell at a local temple was rung 108 times before midnight until the New Year started.  It is called 除夜の鐘(Joya no Kane.) 108 represents human worldly desires known as 煩悩(bonno), and each strike of the bell drives away those desires.

This is one of the most famous Joya no Kane events, but you can enjoy the sounds of Joya no Kane at your local temple.

And voila!  New Year came and everything got so quiet for a few days unless you went to visit shrines. We spent the entire time watching special TV programs.  Your busy parents were at home for a change.  You had some family time.  While Christmas in Japan was purely commercial and celebrated with friends, New Year was a family affair.

So this was the New Year’s Past…  Next post will cover New Year’s Present.  So stay tuned!