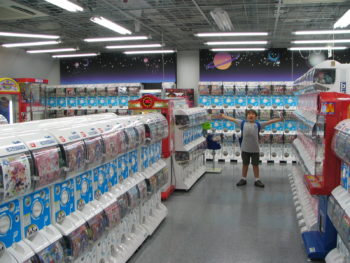 If you have been to Japan, you might have seen Gachapon.  It is also known as gacha, gashapon, or gachagacha.  Gacha is a name trademarked by Takara Tomy A.R.T., while Gachapon/gashapon are names trademarked by Bandai.  The general name for this is capsule toy – not very exciting!  Whatever the names are, they refer to vending machines dispensing capsule toys. It was originally invented (発明する hatsumeisuru) in the US as a gumball machine. There are so many kinds, and you choose what you want, insert (投入するtonyusuru) coins, and turn a knob.  You do not know what you will get, which is a thrill of the game. In Japan, it was targeted to children by offering capsules with colorful yet cheap erasers and such.  And the thrill was at the core of the reward, rather than cheap erasers. From the 1990s, the target audience (標的購買者 hyouteki koubaisha) was expanded and the gachapon has evolved a lot.  You can choose a theme of your choice, say, sleeping toy dogs or bento.  And the quality is superb!!  People spend so much money to collect a series. 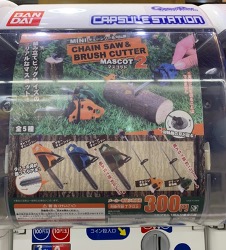 According to the Toy Journal, the capsule toy market has reached ¥40 billion or US$350 million in 2019.  The main driving force (原動力 gendouryoku) has been rather outrageous capsule toys targeting adults.  Some toys are insanely detailed. For instance, realistic furniture, power tools fit in the capsule, and alligator figures of the well-known artist, Keigo, and many many more.  We Japanese tend to be attracted by such fantastical things!  What also attributed to the popularity among the adults is the fact that we could play gachapon to our heart’s content (心ゆくまで kokoroyukumade) with our own money – no parents to tell us “NO!” 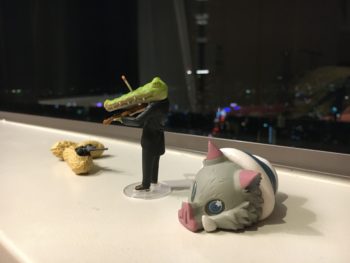 There are many stores with a few gacha machines on the storefront (店頭 tentou), and there are special stores dedicated to gacha machines.  It is so much fun! Some people enjoy creating scenes using capsule toys. If you go to a touristy place, they sure have their gacha machines that dispense capsule toys based on their local specialties. Here is the example of such local capsule toys hand-made and painted by one local artist.

As my last blog on the vending machines, gachapon machines have kept the nation’s attachment to cash (現金 genkin) alive, although some machines that accept prepaid cards have come to the market recently.  There are so many gacha machines in Narita Airport, for example, targeting international travelers who want to get rid of coins before going home.  On my last visit to Narita Airport, I found the spot, which was not too easy to find.  And I am not sure if the space remains open due to the COVID-19 induced travel restrictions.  If you have a chance to go to Narita Airport, will you check to see if it is still there?

The word gacha – you have no control over what you get – has coined some popular slang. Yami Gacha (闇ガチャ) is a gacha game machine that dispenses unfilled losses (ハズレ hazure) most of time.  It is usually very expensive to play, and bad luck costs you a lot of money.  But that is also a fun aspect when you play it with your friends.  There is a YouTube video in which ¥6000 investments (投資 toushi) turned into two masks. Yami = darkness = losses.  This is similar to gambling, in my opinion, and can be very dangerous to your financial and general life!

Oya Gacha (親ガチャ) has won the new word award in 2021.  It means that children cannot choose their parents, like the capsule toy machines.  Similarly, there is a new word “ko gacha (子ガチャ)” meaning parents do not know what kind of child they will get.  These are not really nice words if you think deeply of them.  But young people who coined these words argue that these are just a play on words (言葉遊び kotoba asobi), that these words should not be taken seriously, and that they use these words just to whine (愚痴をこぼすguchi wo kobosu) among friends.    We all should play more gacha to be happy!

There has been an exhibition (展覧会 tenrankai) in Shibuya now entitled 大嘘博物館カプセルトイ2億年の歴史展 (All Fake Exhibition, 200 Mllion Years of History of Capsule Toys, oouso hakubutsukan kapuseru toi niokunen no rekishiten).  Yes, it is all fake produced by Ryo Fujii.  The exhibition basically “proves” that the capsule toys had 200 million years of history, including a fossil (化石 kaseki) of dinosaurs (恐竜  kyouryu) with a capsule on the head!  And the future section displays that each of our lives would be determined by gacha.  Remember, it is all fake. But it is strangely close to a reality….