Air travel in Norway Posted by kari on Nov 23, 2010 in Uncategorized

Norway is an extremely long and narrow country.  If you look at the map, you will see that it really isn´t very far from Bergen to Stavanger, Ålesund, or Trondheim.  It takes a long time to drive to most places in Norway, whether it be on the coast or in the mountains.  However, as the crow flies, it shouldn´t take more than about a few hours to get from one end of the country to the other.  Unfortunately, the number of flights available that fly directly from Bergen to another city is small.  Same goes for flying from Tromsø to Trondheim (which is of course a longer distance) or many other combinations of cities. 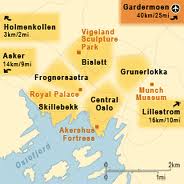 Gardermoen on the map

I was told that I was lucky to get a direkte rute (direct flight) from Tromsø to Bergen.  Usually flights are directed towards Oslo, where you will have a (hopefully) short overgang (layover), and then you will bytte fly (switch planes) to head to your final Norwegian destination.  My friends that work on cruise ships often board and depart out of Ålesund.  They live in Tromsø.  It would make sense for them to  just fly directly south to Ålesund, but instead they have to fly to Oslo, where one can sometimes expect to have an overnight overgang before one can proceed on to Ålesund, or wherever it may be.

For those of you who have not flown to or inside Norway, you may be wondering how many flyplasser (airports) there are and where they are located, and which flyselskaper operate in Norway.  There are no less than 46 flyplasser in Norway, one in every major city, and many small cities.  It is simply essential to have flyplasser located close to just about everywhere due to the difficult and lengthy travel time via another mode of transportation other than flying.