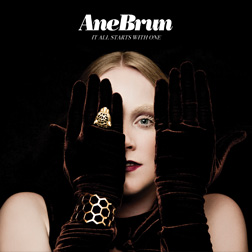 Born Ane Brunvoll on March 10, 1976, this singer/song-writer, guitarist, and vocalist was born in Molde, Norway.  She made her debut in 2003 and has since recorded 6 albums.  Brun has lived in Stockholm, Sweden for the last 10 years.  She runs her own record label, Balloon Ranger Records, when she is not on tour.

When she was about 20 years old, Brun left her hometown of Molde and traveled  back and forth between Oslo, Bergen, and Barcelona.  My guess is she spent summers in Norway and the rest of the year in Barcelona;)  In Bergen, she studied music, law, and Spanish at the University. She clearly had a strong passion for Spain and Spanish.  During this time in her life, she worked at shops and bars to make a living.  It was also during this time that she began writing her own music.

Brun began to take her music very seriously after she felt success with a few demos in Bergen.  She moved to Uppsala, Sweden in 2001 and thus began her professional music journey.  She says that she never dreamt of being a famous musician until she was about 26 or 27.  Like many of us, she did not find her career path until almost the age of 30.

In 2003, Brun took home the Norwegian Grammy Aware for Best Female Artists for her song A Temporary Dive.  My favorite song of Ane’s is the piece she did with Madrugada, another Norwegian group, called Lift Me.  You can listen to it .  She earned another Grammy for this song.

If you live in Europe, you should check out Ane Brun’s tour dates:

I encourage you also to check out Brun’s blog here.  She is extremely down to earth and her posts are really fun to read.  In one, she complained about the terrible heat and humidity in Houston, Texas when she was on tour there.  She also said that Vail, Colorado reminded her of her hometown in Norway and said that she wants to get back there soon.  It must be difficult to be on tour for months and months at a time, especially during the Norwegian summer!
Her new album, It All Starts with One comes out in September:)
Tags: Ane Brun, Madrugada, Molde, Norway, Norwegian singer/song-writer