Ice Harvesting in Norway Posted by kari on Jan 31, 2011 in Norway and the world

On any given day between November and March (give or take a bit), I can have a chunk of ice in my hand within 1 minute.  If I wanted to, I could refrigerate and freeze all of my perishable items right outside of my door.  Because it’s 2011 in the developed world, during the spring and summer, ice makers do the work.  Therefore, I have never thought about the availability of ice.  I can always have a really cold beverage and preserve food in the summer.  If I were a restaurant or bar owner in England or Italy prior to the 20th century, however, the most efficient way to obtain ice would have been of great interest to me.  And it was for many in the food and beverage service industry at that time. 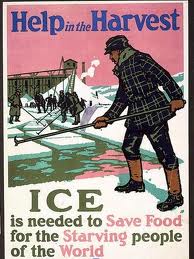 not specific to ice harvest in Norway of course, but shows how important it was!

During the 17th century, clever Brits would use ice from nearby ponds and lakes to fill up their home-made ice storage houses, which were stored underground.  For private purposes, this method sufficed.  When the bar and restaurant scene came alive in the 18th and 19th centuries, this method was not sufficient for an increased ice demand.  Restaurant and bar owners had to figure out a way to get more ice.  The closest, coldest place was….Norway of course!

The first person to import ice from Norway was that father of a Londan man named William Leftwich, the first ice merchant.  Carlo Gatti, a Swiss-Italian entrepeneur, however, was much more heavily involved in importing ice from Norway for his ice cream business.

How Norwegian Ice was ‘Harvested’

Ice harvesters were most commonly sailors who couldn’t be on the water during the winter months due to ice.  Working with ice was hard labor and there was fierce competition among ships in the industry.  These sailors eventually had to find other work starting at the end of the 19th century.  In the 1890s artificial ice was invented and thus removed the demand for ice from Norway.

Who knows if it’s true or not, but ice harvesters claimed that artificial ice was not as pure and did preserve food for as long as real ice did.  I’d be willing to bet they were right.