Lapskaus Boulevard, a tale about Norwegians in Brooklyn, NY Posted by kari on Nov 7, 2011 in Culture

Lapskaus Boulevard used to be the nickname for 8th Ave. in Bay Ridge, Brooklyn, NY.  What does Lapskaus mean and why was 8th Ave. referred to as this?

Lapskaus is a northern European stew and the Norwegian version is usually made with beef and gravy.  The name became associated with 8th Ave. because many Norwegians (and Danes) settled in the working class neighborhood of Bay Ridge in Brooklyn.  Although there was a significant Norwegian presence in the New York metropolitan area for several hundred years, it wasn’t until the 1920s that this area of Bay Ridge in Brooklyn became seriously inhabited by Norwegians.

On street corners one could hear many different Norwegian dialects spoken as emigrants from all over Norway left their homeland.  The majority of the Norwegian residents, however, were from southern Norwegian coastal communities.  It should be no surprise then that these Norwegians who settled in New York were to a great degree involved in maritime activities.

In this neighborhood, there were Norwegian restaurants that served fiskekaker (fish cakes) and lefse, grocery stores that sold brunost (brown cheese) and lingonberry syltetøy (jam).  There were Norwegian Lutheran kirker (churches) scattered around the neighborhood, and an annual Syttende Mai (17th of May) parade was established and continues to this day.

Gradually the neighborhood became more and more populated by Chinese and Arab immigrants and is now called “Little Hong Kong.”  There are still indications that this used to be a neighborhood of Norwegian immigrants.  Siv Ringdal, a woman from a small town in southern Norway called Lista, has written several books about Norwegian emigration to the United States and how this move affected the Norwegian emigrants’ hometowns back in Norway and how their Norwegian roots affected life in the U.S.

I actually met Siv Ringdal (b. 1973) back in 2006 when I lived in Oslo for a semester during my junior year of college.  I had heard about her book, ¨The American Lista…¨and was very interested in her cultural historian work.  I emailed her and we set up a time to meet for coffee at a quaint little café north of central Oslo.  She gave me a copy of the book and told me all about how she got into this project.  She mentioned Lapskaus Boulevard and it is not until this weekend that I thought about it and saw that she indeed completed it and it was published.  Now I need to buy it and read it. 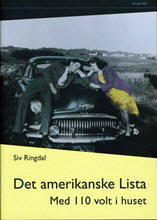 I have a step-brother and step-sister who live in Brooklyn, New York, so for sure next time I visit, I will take a stroll down 8th Ave. and experience the remnants of Norwegian immigration to the area.