May 1st and Norwegian Politics Posted by Bjørn A. Bojesen on May 1, 2016 in Traditions 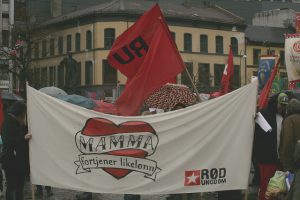 “Mom deserves the same wage (as Dad).” From a 1. mai parade in Oslo. (Photo by GGAADD at Flickr, CC License.)

Liker du politikk? (Do you like politics?) Even though a lot of Norwegians, like people elsewhere, synes politikk er kjedelig (think politics are boring), første mai (May 1st) is a day when many are eager to hit the street and voice their mening (opinion). Traditionally known as arbeidernes internasjonale kampdag (the workers’ international struggle day), første mai remains a public holiday in Norway.

Visit a Norwegian town or major village in the morning hours on første mai, and you’ll probably see a lot of people who går i tog (march in a procession). It’s like a warm-up for 17. mai, the national day. But instead of wearing national costumes and showing their love for Norway, the marchers in første mai-toget carry banners and slogans that showcase their viewpoints. Very often people march in groups, such as the nurses’ organization marching together, or the fagforening (trade union) of the industry workers showing off their smiles.

After the march, there’s very often a public gathering, maybe at a kulturhus (culture house) or in a park. Politikere (politicians) and other persons, such as students, holder tale (give a speech). The speech is often about verdier (values) and things that people would like to improve i framtiden (in the future). Even though many still connect første mai with socialism, it’s really a day for all political parties in Norway, and you also see a lot of right-wing politikere giving speeches. 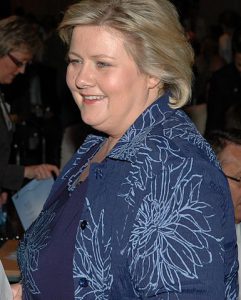 Norge er et demokrati (Norway is a democracy) with a lot of politiske partier (political parties), so it can often be confusing! Here are the parties present at Stortinget (the parliament), from ”left” to ”right”: Sosialistisk Venstreparti, Arbeiderpartiet, Miljøpartiet De Grønne, Senterpartiet, Kristelig Folkeparti, Venstre, Høyre and Fremskrittspartiet. SV is ”socialist”, while AP – who’s run Norway more than any other party – is ”social-democratic”. V, H and FrP are ”right-wing” (conservative and/or liberal). The other parties are somewhere in-between.

Currently, the country is run by the parties Høyre and Fremskrittspartiet. The PM is Erna Solberg from Høyre. God første mai! (Happy May 1st!) 🙂