Norwegian Oops! moments Posted by Bjørn A. Bojesen on Jul 31, 2013 in Language, Traditions 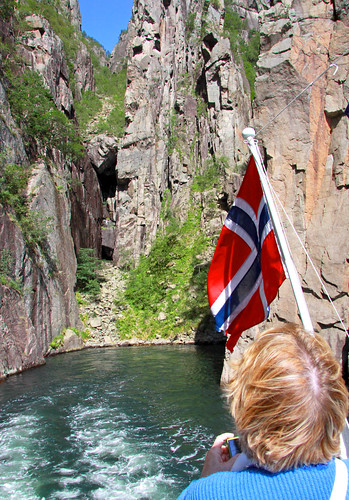 Don’t you fall into a Norwegian pit! The Fantahålå pit at Lysefjord. (Photo by Guillaume Baviere at Flickr.)

When I was a kid, I once went with my mother into a public library in Norway to look for cartoons and children’s books. The old lady at the counter seemed really friendly, so I said out aloud, so everyone in the library could hear it: “She looks rar!” In my native language, Danish, that’s a nice thing to say, ’cause rar simply means “friendly” or “nice”. In Norwegian, however, the same word means odd, strange, peculiar… I don’t remember the looks of the people around me, but the librarian simply burst out laughing. As it turned out, she was Danish too…

When it comes to language-learning, children have a huge advantage: They learn really fast! So, soon after this episode, my Norwegian skills reached the near-native level, and I didn’t make any further language mistakes that are worth sharing with you! (At least so I like to think! 😉  )

Nevertheless, I’ve heard a lot of both non-Norwegians and Norwegians (!) making fun, little mistakes while speaking the “no-frills” Norwegian language, so I thought I’d highlight a few pitfalls of which to be aware (and as you know, the pits are very deep in Norway!):

Making the right distinctions between vowels

Many foreigners have a hard time hearing the difference between the Norwegian U (as in ute, outside) and Y (as in yte, contribute) sounds. As a consequence, they tend to compensate by pronouncing the Norwegian U as a Spanish or German U (English “oo”). To confuse things further, this pronunciation sounds more or less like a Norwegian O (as in the name Olav! 🙂  )
So, without getting too phonetic here, make sure you clearly distinguish between du (you) and do (toilet), toll (customs) and tull (b*sh*t!)

Don’t mess with the kj– sound!

The sound written as “kj” (or “k” in front of “i” and “y”) should sound like the “h-” part of huge (in British English). So, the name Kjell should sound like “Hyell“. However, many people (including a “shuge” number of Norwegians!), pronounce the sound like English sh!

Take care with words like Kjell – skjell (seashell), kjele (kettle) – skjele (to squint)… And never complain that something’s skjedelig when it’s just plain kjedelig (boring). It makes you sound a bit … well, like a teenager that uses the wrong pronunciation mostly to make other people feel upset!

There’s a myth that Norwegians are rude, since there’s no word for “please” in the language. Nothing could be further from the truth! In fact, I think Norwegians are some of the most polite people on earth, saying takk (thanks!) or tusen takk (1000 thanks!) every time they have the chance to do it.
If you want to avoid embarrassing situations, it’s a good idea to remember to say takk whenever somebody helps you. When you’ve eaten with Norwegians, you should always say takk for maten! (thank you for the meal!) before leaving the company at the table. (Unless you’re the cook, of course!)

Have you ever made an embarrassing mistake while talking to Norwegians? Please share in the comments section. Norwegian isn’t always as straightforward as it looks, so there’s nothing to be ashamed of! 🙂