Norwegian Regions Posted by Bjørn A. Bojesen on May 30, 2012 in Uncategorized 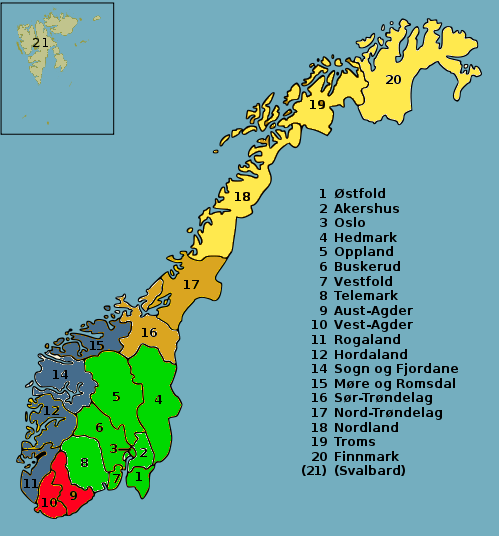 When the current Norwegian Prime Minister, Jens Stoltenberg, was picking members for his regjering (government), a journalist [shoornaLIST] asked him how he went about. The PM joked that he had to hit the right balance between ”kjønnsdeler og landsdeler” (gender parts and country parts). This demonstrates how important likestilling (equality) is in Norway: Ideally, half of the ministers should be menn, the other half kvinner (women). The remark also tells something about Norwegian regionalism: Noone should be left out because (s)he doesn’t come from the capital. In fact, people from remote areas should be helped, so that everyone can get the same opportunities.

• Svalbard. This island group in the Arctic Ocean between Norway and the North Pole is sometimes considered a part of
• Nordnorge. The enormous, northern half of Norway is known for its dark winters, summer midnattssol (midnight sun), mosquitoes, endless plains inland and fishermen’s villages and islands at the coast. The nordlendinger (Northerners) are renowned for their generosity, openness and unceremonious sense of humour. Nordnorge is also the home of (most of) the Saami people.
• Trøndelag. The Trondheim region is the link between Southern and Northern Norway. In the age of the Vikings it used to be the country’s centre even in a political sense… People from other parts of Norway often make fun of the trøndere – mostly because of their dialect, which can be really hard for other Norwegians to understand. The stereotypical trønder man has a long moustache and loves to drink karsk – a mixture of coffee and alcohol.
• Vestlandet (”The West Country”). This is the place where people from Southern Europe go on vacation. Vestlandet is ”Norway in a nutshell” as the tourist leaflets say; it is the region with the highest mountains and most of Norway’s fiords, waterfalls and glaciers. Unfortunately, it also receives most of the country’s rain, and many vestlendinger are seen by other Norwegians as a bit reserved. One notable exception is the bergensere – the talkative inhabitants of the very picturesque and very rainy city of Bergen are sometimes called ”Norway’s Italians”.
• Østlandet (”The East Country”) is the most populous part of Norway, mainly because of the capital, Oslo. Apart from Southern Telemark and the area around the Oslo Fiord, Østlandet is an inland region, with hot summers and (very) cold winters. It is a lot flatter than Vestlandet, and therefore has a lot of agriculture. People from other parts of the country sometimes see some of the østlendinger – Oslo people in particular – as a bit self-important, but hey! isn’t that the stereotype about capital regions everywhere? In real life you’ll find everything from busy Pakistani salesmen in downtown Oslo, to affluent boat aficionados along the coast, to hardworking farmers in inland Hedmark.
• Sørlandet (”The South Country”). This is the Kristiansand region, Norway’s ”muzzle”. It is a popular holiday destination for Norwegian families (the Kristiand Zoo is famous among children all over Norway). The sørlendinger, who are sometimes referred to as ”stand-in Danes”, are known for their friendliness and soft way of talking.