Believe me. If you go into any matbutikk (grocery store), much less bakeri (bakery) in Norway, you will be able to find dozens of kinds of brød (bread). I personally go for the tykk grovbrød (thick whole wheat bread) med nøtter og kjerner (with nuts and seeds) eller mørkt rugbrød (or dark rye bread).

I don’t like brød that you can smush up into a ball in your hand like most of the brød I find in matbutikker i USA. Of course there’s Wonderbread, which I don’t even think should be considered brød. I think if I ate a whole loaf, I wouldn’t even feel mett (full). I think half of the content is air. I like tykk, sunn brød (thick, hearty bread) that have a lot of smak (flavor) and actually fill my tummy, not to mention provide my body with næringstoffer (nutrients) it craves. There are 2 private bakerier in my town and 2 bakerier i matbutikker and I struggle to find god brød.

We have family friends that live on en gård (a farm) and they built en kjempestor mursteinovn (a huge brick oven) outside and they bake det beste brødet i hele verden (the best bread in the whole world)! They also have pizza natt (night) at their farm hver tirsdag (every Tuesday), which is out in the boonies, mind you. Again, the best-the best pizza i hele verden. Hver ingrediens (Every ingredient) (comes from the farm) unntatt for (except for) gjær (yeast) and ost (cheese), som kommer fra en gård i nærheten (which comes from a farm in the vicinity). Selv kjøttet kommer fra gården deres (Even the meat comes from their farm). And the best part is, they don’t advertise; it’s all word of mouth. It’s clear that lot’s of people opened their mouths and spread the word about how great this pizza is because they sell i gjennomsnitt (on average) 200-300 pizzas.

So back to brød, you might suggest that I stop complaining and either move to Norway if brød is really that important to me (I’ve considered it) or just bake my own! Certainly an understandable suggestion. However, I have never been known to be a good baker. In fact, I think I’m a natural at completely messing up oppskrifter (recipes)when I bake. Maybe if ta et kurs (take a class) or just watch a Norwegian do it. Until then, I wonder hvilket merke (what brand) of brød you all like? Do you secretly love Wonderbread? Country Hearth? Brownberry? What’s your favorite type of brød? Is it rugbrød (rye bread), allminnelig brød (light rye), fint brød (white bread), grovt brød (dark bread)?

And check this link out.

The Norwegian Olympic team has for the past 20 years or so had Norwegian bakers travel with the team to bake homemade, Norwegian brød that they are used to eating at home-120 loaves a day, to be precise. I think that’s so awesome. It makes sense though, right? If you eat a certain way at home, you need to eat the same way when you’re away if you’re an Olympic athlete-the body needs consistency, and good brød! 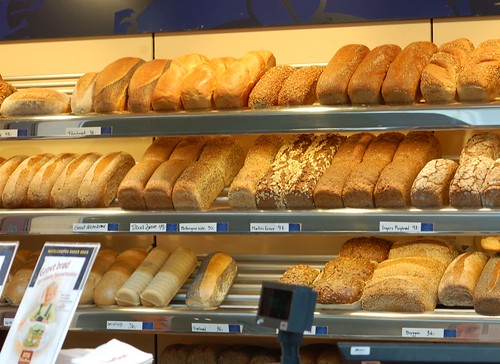