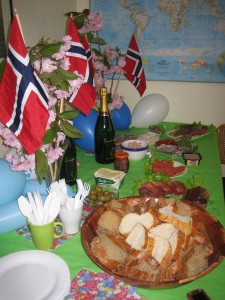 just a portion of the frokost spread

Since I have already written several posts about syttende mai, I will direct you to those for more information.  They were posted on fjortende mai (May 14) and sekstende mai (May 16) of 2009.  For those of you who are either unfamiliar with this helligdag (holiday) or just don’t feel like rummaging through the archives to find the earlier posts, I’ll tell you a bit about syttende mai and why the whole country of Norway is full of parades, music, food, and national costume on this day every year.

Following a nearly 400 year union with Denmark, the Norwegian Independence movement successfully drafted Norway’s very own grunnlov (constitution), signed May 17, 1814 in Eidsvoll, Norway.  Den norske grunnloven (The Norweigan constitution) is one of the world’s most radically democratic constitutions. It resembled both the constitutions of the French and the United States of America, except that Norway retained monarkiet (the monarchy), although a system of checks and balances deprived the king of absolute power.  Dig this: the Norwegian grunnlov is the oldest in Europe and the second oldest in the world that is still in use today!

4 centuries under the rule of the Danish and one signed grunnlov later, nordmenn have ample reason to feire (celebrate) this day every year, much like I and my fellow Americans feirer July 4.  Besides the fyrverkeri (fireworks), I don’t believe our celebrations even come close to syttende mai celebrations.  Every community (or several join together) in Norway gathers to celebrate.  If you every have the opportunity to go, just beware that you will likely stand out because you probably don’t have a bunad.  A bunad is a national costume of rural origin that Norwegians wear on important helligdager.  I think bunader deserve their own post at a later date….

So, unfortunately syttende mai falls on a mandag this year, which makes it difficult to attend activities for those of us who work.  But, maybe you’re lucky like me and can attend an early frokost (breakfast) before work!  I live just down the street from St. Olaf College, where the Norwegian department hosts a gigantic frokost every year for hundreds of people, both students and community members.    We eat vafler (waffles), brød med pålegg (bread with toppings) like ost (cheese), syltetøy (jam), egg, tomat, og fisk!  Vi spiser, drikker, synger, og prater (We eat, drink, sing, and chat). 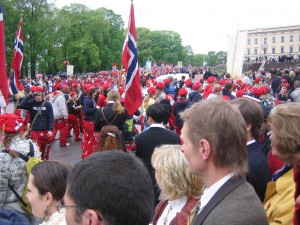 Russ in the parade on Karl Johans Gate