The Christian Radich-Norwegian tall ship Posted by kari on Feb 27, 2011 in Culture

I probably never would have heard of the Christian Radich were it not for my father whose dream it is to sail on this ship.  The Christian Radich is a Norwegian full rigged ship with 3 masts that accommodate 27 sails (14, 600 square feet of sail!).  The ship is 240 feet long including the bow and has a 15 foot long draught and is designed for a crew of 18 sailors.  88 passengers can comfortably fit aboard.

So why is this ship such a big deal? 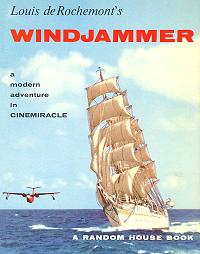 Named after it´s owner, the Christian Radich was built by Framnæs Mekaniske Verksted in Sandefjord, Norway, and launched in 1937.  It’s primary purpose was to train sailors for the merchant marines, which it did for many years.  However, it was through it’s role in cinema and TV that the Christian Radich became so well known.  In 1958, it appeared in the Cinemiracle film ´Windjammer,´ the story of 50 young Norwegian boys who sail from Oslo across the Atlantic and to the United States in a training effort to teach them the art of sailing and seamanship, as well as demonstrate the value of trust and teamwork.

On the journey across the Atlantic, the ship stops in several ports of call including Madeira (Portugal), Willamstad (Curacao), San Juan (Puerto Rico), New York City, Boston, and New Orleans.  In addition to cultural experiences in all of these ports, the boys also encounter a U.S. Navy task force.

There is a song in the film called ´Kari Waits for Me´ which you can listen to here:

My Dad is slightly obsessed with this movie and with sailing as well, so it makes sense that he got the idea for my name from this movie.  As I am also into sailing (to the credit of my Dad) and clearly into Norway as well, it is fitting that I was named after a girl in a Norwegian sailing movie:)

I thought I had done a really great job with the gift I got my Dad for Christmas.  He had always talked about wanting to buy the original Windjammer movie from 1958, but could not find it anywhere.  Well, silly me thought I found it on Amazon, of all places, so I bought it and gave it to him with a copy of the original Cinemiracle poster of the movie.  As it turns out, he was right.  It is virtually impossible for the average person to locate this movie on disc anywhere.  It sounds like it will take a very wealthy person to provide funds to reproduce this movie into a format suitable for viewing today and available for purchase.

After I gave this incorrect version of the film to my Dad, he got back on the research train and discovered that the original crew members from the movie got together in Oslo not too long ago to view the film together.  He said he would have paid gobs of money to be there.

If you have any insight into this original movie and how it may be possible to view it, or miraculously purchase it, please do share with us!!

And click here to see the official website for Christian Radich.  You can actually pay to be a crew member on this ship:)

And the lyrics for the song Kari Waits for Me:

KARI WAITS FOR ME

And homeward we will go.

Homeward to the snow capped mountains

Rising from the sea.

Homeward to the land I love

Where Kari waits for me.

Kari waits for me at home, Oh!

Kari waits for me.

I see her standing there

Beside the restless sea!

Kari waits for me at home,

Tho’ I must sail the sea.

I’m a sailor born to roam

While Kari waits for me.

Many girls in far off lands

Have many charms to see,

They’ll not wear my golden bands

While Kari waits for me.

Let me ride the homeward winds

That carry me to shore.

Till the day when I can hold my Kari,

Kari waits for me!