The King of Chess Speaks Norwegian! Posted by Bjørn A. Bojesen on Nov 29, 2014 in Culture 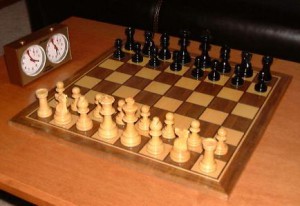 Sjakkmatt! [shakk-matt] (Checkmate!) – Maybe you’re like me: Having heard that word too many times, I’ve somehow forgotten the existence of sjakk (chess)… (You know, the boardgame with 64 black and white squares and a bunch of black and white figures…)

Noen mennesker (some people), however, elsker å ta et slag sjakk (love playing a game of chess). En liten gruppe (a small group) of people are even extraterrestrially skilled at moving their bonde (pawn), springer (knight), løper (bishop), tårn (rook), dronning (queen) or konge (king) across sjakkbrettet (the chess board). Guess who’s the verdensmester (World Champion) of chess? Since this is the Norwegian blog, it’s of course a Norwegian: 24 years old (!) Magnus Carlsen from Tønsberg.

Chess may not be quite as watchable as skiing, but this month Norwegian journalists once again hurried to Sotji i Russland (Sochi in Russia) to cover verdensmesterskapet i sjakk 2014 (the world championship of chess 2014). I femten dager (for fifteen days!), Carlsen defended his 2013 title as verdensmester against 44 years old Viswanathan Anand from India. On November 23rd, after 11 omganger (matches), Carlsen was declared vinner (winner). 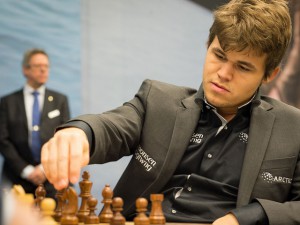 I hardly know anything about chess as a sport, and would be surprised if a majority of Norwegians did! 🙂 Nevertheless, Norwegian news outlets have been very busy telling every nordmann (Norwegian) that a landsmann (fellow Norwegian) has brought ære (honour) to the nation! Carlsen was even portrayed and called sjakkhelten (the chess hero) by Se og Hør (”Look and Listen”), the most trashy gossip mag you’ll ever find in Norwegian!

When Carlsen bet Anand in 2013, the Norwegian geni [shehNEE] (genious) was only 22 years old. So, if you want to snatch pokalen (the trophy) from Carlsen, you’d better invite a friend and get down to that board! Husk at øvelse gjør mester! (Remember that practice makes perfect!)

Here you can see some photos of Carlsen and Anand being greeted by Vladimir Putin.

Here there’s a fun video of actor Gbenga Akinnagbe going to Sochi to look at the games.