Per Inge and mayor Laura Seltveit on top of Hovlandsnuten

While å løpe (to run, running) is popular in many countries, Norwegians have recently taken the classic sport with them in a brand new direction: uphill. I had a chat with Per Inge Fjellheim from Sauda (the West Norwegian town where I spent parts of my childhood). He’s one of the ildsjeler [ILLshehler] (enthusiasts, literally ’fire souls’) behind the annual race Hovlandsnuten Opp…

Hovlandsnuten Opp (Up the Hovland Peak) is a motbakkeløp (uphill race) in Sauda, Rogaland. This year more than five hundred runners participated. Most of them are trimmere (joggers), but there are also elite runners who compete to get the best time in teams of five. For the less spreke (fit [plural form]) we have two shorter løp (races). The medals are just the same.

How long have you been doing this, and what made you start?

It’s the sixth time we organize this race. I had this idea of a race with a beautiful view to the mountain on the one hand, and to the fjord on the other. It was meant to be an offer to everyone who’d like to get out of the couch and get a nice experience.

What kind of people participate in the Hovlandsnuten Opp?

People of all ages, joggers, pros from Kenya, Norway and Switzerland.

What’s the point of running uphill?

That’s obvious. Running downhill is no challenge! The panorama comes with the opptur (uphill trip). As a training method, motbakkeløping (uphill running, literally ’counterhill running’) is thrice as effective as bicycling. And if you were to run down you’d have to get up anyway…

Are there any similar uphill races in other parts of Norway?

The number of motbakkeløp in Norway was 136 in 2011. The number is increasing.

If any of the readers would like to join you next year – what should they do?

Practice walking non-stop for two hours. If you haven’t got any mountains where you live, find a sandy beach or some hills. Bjørnstjerne Bjørnson writes in his poem ”Norge, Norge”:

Norway, Norway, getting blue as it rises from the grey-green ocean, isles around it like youngs birds, fjords like tongues into the quiet places.

Go to the quiet places. Go to Sauda in Rogaland and be there the weekend June 14-16 2013! Together with five hundred others you’ll experience the best Western Norway has to offer, with fjords, mountains and waterfalls. You won’t regret! 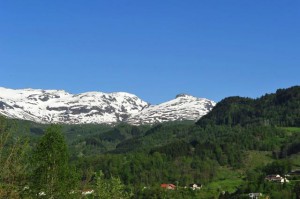 Hovlandsnuten, the mountain in the middle