Summer is here and that’s why I decided to write about one of the very interesting holidays in Poland.

In folk tradition it was a great festival for greeting in the summer, celebrated during the summer solstice on the shortest night which is the 23rd of June, and the longest day, June 24th. The Church assigned Saint John the Baptist as its patron saint and all traditions and customs of the holiday now bear his name.

The oldest tradition of the feast was a ritual bonfire called sobótka. On the night of St. John’s Eve great bonfires were burned on hills and forest clearings. They were lit by rubbing wooden boards – an archaic way of making a spark to ignite fire.

Girls dressed in white dresses danced around a bonfire with extremely powerful magic herbs tied around their waist, and sang songs of love. Boys came to their bonfire or lit their own to show off their agility by jumping over the fire. 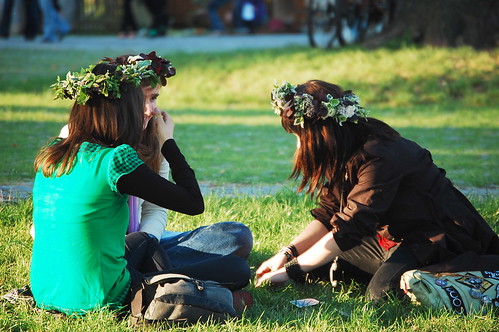 At midnight they all set off in search for fern flower (kwiat paproci), supposed to bloom only on this single night during the whole year. Its unearthly glow would show them the way to some treasure hidden deep underground and whoever found it would have all the wisdom of the world revealed to him as well as wealth and happiness. Not only fern flower (which blooms only in fairy tales), but also other plants played an important role in St. John’s Night celebrations. People believed that wormwood (bylica) was thought to scare witches (czarownice) and any kind of evil away from homes, so it was hung on front doors of houses, cowsheds and barns, sewn into clothes and thrown into St. John’s Eve bonfires against charms and spells.

Water was supposed to acquire special properties on St. John’s night. They said it was “blooming” on that night and only from St. John’s night you can swim safely in ponds, lakes and rivers.

But the most important ceremony performed by girls, which has survived to our times, was letting wreaths (wianki) float on water. Girls wove wreaths from wild and garden flowers, as a symbol of their own virginity. Then they tied the wreaths to small boards and at night they launched them to a river or stream with a burning candle attached. Some of them launched two wreaths at once, watching how they floated. If they set off quickly, following the river current and keeping close to each other, mutual love and marriage were indicated. The most desired sign was when a girl’s wreath was picked by the very boy she cherished in her heart.

Every year in Warsaw and Cracow on the banks of Vistula River, and in other places on other rivers and lakes, great festivals of wreath floating are organized, accompanied by concerts, picnics, artist performances of St. John’s Night ceremonies and games as well as fireworks.

Those nights are a lot of fun – so if you are in Poland at the end of June – you should definitely celebrate with the locals!