The last post about a trip to a «деревня» [village], or more correctly a «посёлок» [settlement] in the Russian region of «южныйУрал» [Southern Urals] is followed up today as we continue our exploration of a part of Russia that I’ve come to love dearly after three years here: «Урал» [the Ural Mountains]! Today’s journey takes us deeper into the region of «среднийУрал» [the Central Urals] and to «ВерхнийТагил» [Verkhny, or ‘Upper’, Tagil]. This place is named after the river it stands on – «Тагил» [Tagil]. Another city, much bigger in population, located another hour’s drive north and also named after this river is «НижнийТагил» [Nizhny, or ‘Lower’, Tagil]. How come Verkhny Tagil is the ‘upper’ one, when it’s ‘lower’ on the map, you might be wondering? Because the river Tagil runs from south to north, thus making Verkhny Tagil ‘upper’ according to the river. (I’m sorry that this piece of Google Maps that I stole is not entirely clear – anyway, today’s town is marked by the little blue bubble…)

For two reasons July 2009 will be spent by me traveling the beautiful region of «Урал» [the Urals]: 1) because it is where I live (thus it is always close-by) and I know many Russians in different towns in the Urals, thus I can «ездитькнимвгости» [travel to visit them]; and 2) because this region has lovely nature – it is not all «горы» [mountains]. Do please make a note, by the way, of the fact that the Russian name for the region – «Урал» – leaves out the ‘mountains’ part, something present in many other languages, in English for example. In Russian you say «Урал» and with that you feel content and rest assured that people will understand what place on this Earth of ours that you have in mind. Do also note that the locative case (let’s also not forget the Russian name for this case: «предложныйпадеж») form of this word is «наУрале» [in the Urals (lit. ON the Urals)]. This means that you must also change «предлог» [preposition] when asking the important question: «откуда?» [from where?] and answer it with: «сУрала» [from the Urals], using everyone’s favorite «родительныйпадеж» [genitive case]. Last week I visited the village/settlement of «Полетаево» [Poletaevo] located south of the city «Челябинск» [Chelyabinsk] and returned with a rather disturbed by the depressing impression the Russian countryside made on me. This week I’ve returned from another Ural ‘sojourn’ with a much more positive impression and restored some of my lost faith in Russia as a country. After all, there are a million sides to every story, just as every coin can be flipped in a thousand different angles, thus a country such huge in size and population as Russia can never be summed up by one visit to one place, one talk with one person or one read of one novel. This country has made itself famous by never siezing to be complex, by enldessly contiuing to surprise and never failing to amaze. That’s why one should never be fooled into thinking anything is ‘set in stone’ in this country just because you have half a decade of experience living here. But that’s the fun about, right? That’s why we keep learning about Russia, isn’t it? Because we remain constantly fascinated by the Eastern Motherland? Because we can never really «поставитьточку» [to finish; close the books on] this country?

This is, incidentially, the lesson I learned after visiting «ВерхнийТагил» [Verkny Tagil] for one day (yesterday) and one night. It is indeed a «маленькийгород» [small town] located «насреднемУрале» [in the Middle Urals] about two hours north-west of Yekaterinburg. Today’s post is a picture post about what one is bound to found in a Russian small town – with example pictures from the lovely small town of Verkhny Tagil! 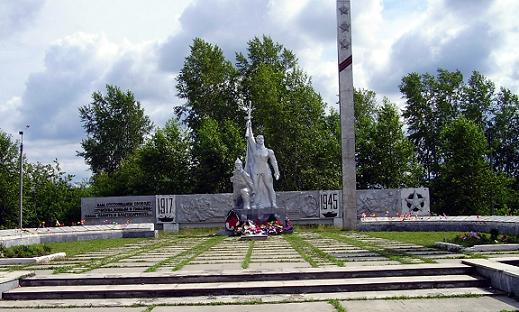 In every Russian town – no matter how small or distant it may be – there is a «памятникВеликойОтечественнойвойне» [monument in honor of the Great Patriotic War]. Here it might look like this war lasted a very, very long time – between the years 1917 and 1945 – but that’s just because the year 1941 is hidden behind the soldiers. 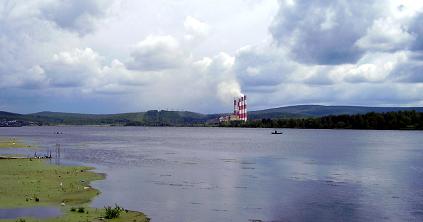 Many Russian smaller cities are built around one large factory, something called «градообразующий завод» [this could be translated as ‘a factory that creates a town’]. When such factories ‘die’ the result is that the town built around them also dies (sad, but true). Verkhny Tagil is built around «Верхнетагильская ГРЭС – тепловая электростанция» where half of the town’s population works. 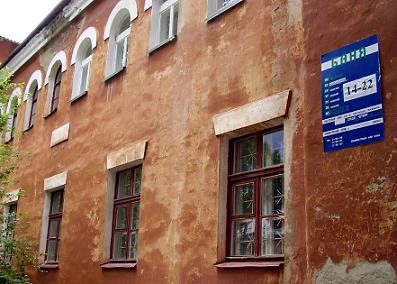 Of course every town has to have a «баня» [public bath]! This one works between 14 and 22 and have separate days for women and men. Make sure to check this while planning your visit there! 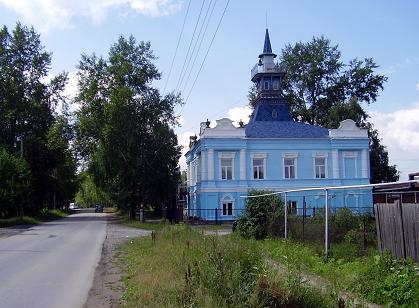 Russian towns – once again, no matter how small or distant from civilization they may be – are very proud of their local history. That’s why you’ll find a «краеведческиймузей» [regional museum] that’s always worth a visit. Sometimes you’ll be lucky to find it in such a great state as the one above – newly painted in a beautiful shade of blue. 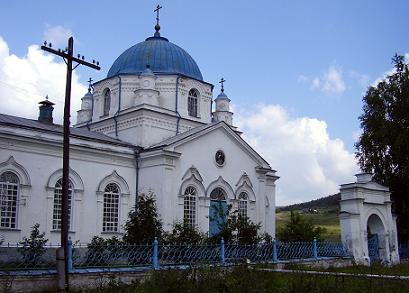 I’m not sure that every Russian town – due to the fact that «коммунизм» [communism] brought with it «принуждённыйатеизм» [forced atheism] when this country was known as «СоветскийСоюз» [Soviet Union] – has a «церковь» [church] yet. But what I know is that small town churches are constantly being either restored or built in Russia today, and that the one pictured above in Verkhny Tagil survived all the 70 years of communism without ever loosing its initial function.

Next week will take me to Красновишерск [Krasnovishersk]. Anyone who can guess what (or who?) makes me want to travel even further up north in the Urals?