The title of today’s post might (actually have been intended to) lead my dear readers’ minds astray. Despite whatever you might have thought that this post was going to be about, let me assure you that «нет, не это я имела в виду» [no, that was not what I had in mind]. What I actually «имела в виду» [had in mind] was something entirely different – the importance of the «коллектив» [collective; group of people] in Russian society and culture. It is not surprising, I guess, that the country which once tried to build «коммунизм» [Communism] would still have some features of the «все за одного, один за всех» [all for one, one for all] type of thinking intact today. How do I know this? you might ask. As a matter of fact, I know this because I learned it while being a part of a «дружный коллектив» [harmonious, united; amicable collective] in Russia during the past year and a half. This united and harmonious collective is the «группа» [group] of students with which I am currently studying «в магистратуре» [in the Master’s program] at Ural State University here in Yekaterinburg. But before telling you of how things are done «коллективно» [collectively] in today’s Russia, I must spend a few words explaining «система высшего обрзазования в Российской федерации» [the system of higher education in the Russian Federation]. I’m not going to tell you EVERYTHING about this, though, both because it is impossible (it is really THAT complicated) and because that is beside the point. What I will focus on today – and through which I will illustrate an important aspect of «коллективность» [fem. ‘collectivity’] – is «сдача экзаменов» [passing of exams] in Russian universities.

The process of passing exams is known as «сдача» in Russian, though you might come to find any of the following translations when looking up this word in the dictionary: lease; surrender; delivery; change, money received back after paying for goods; hit back. It is called «сдача» because of the phrases «сдавать экзамен» [impfv. to TAKE an exam] and «сдать экзамен» [pfv. to PASS an exam]. 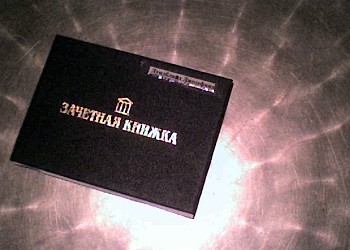 All students at institutions of higher learning in Russia have the following in their possession: «зачётная книжка» [a student’s record book]. Colloquially it is known as a «зачётка». In order to receive your «диплом» [diploma, certificate given upon completion of a course of study (i.e. high school, university, etc.)] after finishing your education you must turn your «зачётка» in and you’ll never see it again in your life. That’s why this picture is almost sad – soon I will have to part with ‘her’ forever…

At the end of every course in Russian universities you are given a «список вопросов к экзамену» [list of questions for the exam]. It is imperative for you to be aware of the fact that this list is never – as is the general practice in most other countries – given to you at the BEGINNING of a course, but only at the very END of it. While taking a class in a Russian university you never can be completely sure what is actually required of you to know in order to pass it. Sometimes you’ll get a «список литературы» [list of literature (required reading)] in the beginning of a class, but far from always. The amount of questions varies greatly – from only ten up to a hundred. On the exam you will be handed what is known as a «билет» [ticket] from the professor. This ‘ticket’ contains a certain number of the questions from the list mentioned earlier. «Если повезёт» [if (you) get lucky] it could be only one question; if you don’t get so lucky then you might have to answer up to five questions… In Russian universities almost all exams are «устные экзамены» [oral exams]. But before you are brought in front of the professor to start explaining the answers to them, you get an hour or two to prepare your answers «письменно» [in writing]. The tricky part about passing exams in Russia is that the professor can always ask you more questions than what was initially on your «билет». Usually they do this if they feel that you haven’t really answered good enough to pass it. Or if they’re unsure what grade to give you – if you actually deserve «отлично» [excellent (the equivalent of A or 5 in other grade systems)] instead of «хорошо» [good (B or 4)]; or «хорошо» instead of just «удовлетворительно» [satisfactory (C or 3)]. 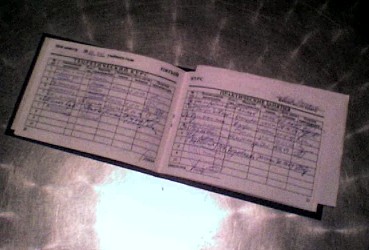 After passing an exam the professor will write your grade – by hand! – in your «зачётка» like this. Once a grade has been written in it there’s nothing you can do to change it. You can cry, and you can shout, but it won’t make «хорошо» miraculously turn into «отлично».

So where in all of this does the «коллектив» so proudly stated in today’s title enter into the picture? I’ll tell you exactly how: in how I and my «учебная группа» [study group; group of students] prepared during January for our exam in the subject «История и философия науки» [History and Philosophy of Science]. The «список вопросов» [list of questions] for this exam contained forty questions and we’re twenty students in the group. Thus we divided the questions between us and each person prepared answers to two questions. Then we e-mailed the answers to one girl in our group and she compiled all of our answers into one big document which was sent to everyone. It is not just my group that decided to prepare for exams «коллективно» [collectively]; I’ve heard that it is actually a very common practice found all over Russia. Usually only a few people in a study group go together this way; it is rarer to find such a group like mine where everyone is prepared to take «ответственность» [responsibility] for themselves as well as for the others. Because to do something like this «коллективно» [collectively] is dependent on the fact that everyone delivers – since ALL questions are included on the exam and it will be your fault if you didn’t prepare an answer in time and an other student failed the exam because of it.

And I don’t know whether I should feel happy or sad about the fact that I only have ONE exam left to pass here in Russia. In a way, I feel very sad about it because when I turn in my «зачётка» [student’s record book] after passing «государственный выпускной экзамен по русской литературе» [state final exam in Russian literature] in a month, I know that it will be «конец эпохе» [the end of an era]. On the other hand, I also feel equally happy because I know a completely new adventure awaits me after all of this has been done (yeah, I did get accepted to Berkeley!)…