It’s all about the Learning Process! Posted by josefina on Aug 8, 2009 in language

Always when I’m back home in Sweden and thus living outside of Russia, one and the same question is constantly on my mind: «Как изучать русский язык вне Российской федерации?» [How to study (learn; read; explore) Russian language outside of the Russian Federation?] The main point within this simple question could also be posed in many other ways, like for example: «Как учить русский язык вне России?» [How to learn Russian language outside of Russia?] or – this one is for the truly ambitious – «Как выучить русский язык, не будучи в России?» [How to learn (this perfect verb means that you reach a certain result, in languages it is almost synonym to becoming fluent) Russian language, not being in Russia?]. All of the questions above center on the largest problem for all people trying to learn a language without living in a country where it is spoken. If wake up one morning and find yourself living in «Петрозаводск» [Petrozavodsk], for example, you’re bound to be surrounded by it constantly and sooner or later forced to speak it – even if you’d rather not because «тебе стыдно за твой акцент» [you’re ashamed of your accent]. Learning Russian language if you are living, like I am right now as I’m writing this post, in a small red house somewhere deep in the Swedish woods without any Russians around to speak to for miles and miles – «это немножечко потрудней» [it’s a wee bit more difficult]. That, however, doesn’t mean that it can’t be done! It just takes a little longer and more effort.

The question is, if you’re living far away from Russia but still feel that in your soul you have a burning desire to learn this language, what to do? «С чего начать?» [With what to begin?] For a start you could surround yourself with Russian language on a day-to-day basis. It can be very basic, simple things – but still, Russian in front of your eyes every day many times. «Как это сделать?» [How to do that?] I’ll tell you what I did once long before I moved to Russia and used to spend the summers in my mother’s little red house in the Swedish woods. (This is where I am right now, that’s where this idea came from to begin with…) My mother gave our little place in the sun a name – in Swedish, of course – “Sjöglimt”. This could be translated into English as “A Gleam of Lake” or “Lake Twinkle” or whatever one would like if one really had to translate this ironic name into English (it is situated right on a lake, thus being far from just a ‘gleam’ or a ‘twinkle’ of water). But what would it be in Russian? I decided to try and translate the name into Russian and paint a sign saying – in both Swedish AND Russian – “Welcome to Lake Twinkle”. This sign would greet visitors approaching the house, as well as cause unwanted ones to back off since any message written in thick Cyrillic letters out in the middle of nowhere can’t be good news… So that’s what I set out to do. And here is where it gets interesting! 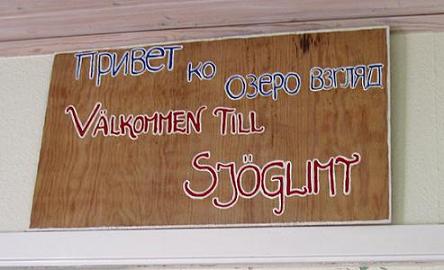 This was sign #1: «Привет ко озеро взгляд» [‘Hello to Sea Glance’]. I made this sign during the summer of 2004, using only my dictionary and some common sense. How many grammatical mistakes can you make out? I think all of it clearly shows that at this point in my life – after only WANTING to learn Russian for about a year, but not really having started to study it – I did not know Russian at all. 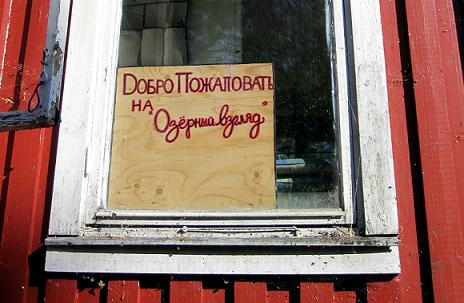 This is sign #2: «Добро пожаловать на “Озёрный взгляд”» [‘Welcome to “Laky View” (Lacustrine; penetrating to lakes)”]. I made this sign during the summer of 2006, using everything I had learned during two years in Russia. Here you finally have the real Russian welcome – «добро пожаловать» combined as it should be with the preposition «на» [here it means ‘to’] because the question we must ask ourselves is: «куда?» [whither; to where?]. And the case that answers this question is of course «винительный падеж» [accusative]. (More about this case’s prepositions in a post to be written in a not-so-distant future). One can still have all sorts of opinions about the name «Озёрный взгляд» and how strange it may sound in Russian, but at least it is written within quotation marks – just like on the sign of any good old Soviet/Russian «санаторий» [sanatorium; convalescent center] or  «дом отдыха» [‘House of Rest’].

So what am I suggesting you should do? Go home to your poor mother’s «дача» [summer house], pick a name for it, translate it into Russian and paint it with big, thick Cyrillic letters on a sign to scare of the neighbors? (Or just get them talking – maybe both!) You could do that. Or you could write what different things in your home are called on post-it notes in Russian and then put them on the specific items. Whenever you use something, like «холодилник» [the fridge], you’ll see this word and you can even repeat it out loud. Or try to find out what different actions are called in Russian and say them when you’re doing them.

Like for example what I’m doing when I’ve been out rowing my boat the last couple of days: «грести, грести, грести…» [to row, to row, to row…]. It is really all about the learning process! And about the importance of making mistakes and then learning from them: «На ошибках учимся!»