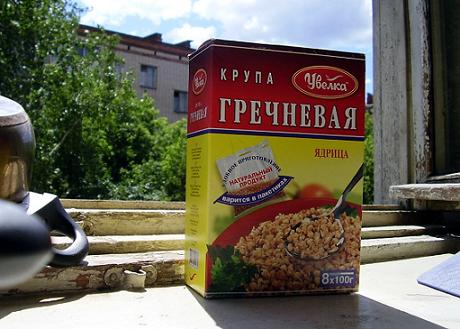 Introducing an essential part of Russian cuisine: «гречка»! «Гречка» is actually the ‘nickname’ («уменьшительно-ласкательный вариант» – don’t you just love the Russian language for applying diminutive even to such things as grains?) whereas the real name for buckwheat is «гречиха». In the stores you can also find it in boxes marked «крупа гречневая» [buckwheat] as pictured above.

Your first «гречка» experience is more often than not an unpleasant one. If you’ve never tasted «гречка» before in your life – and I hadn’t until September 2004 in Saint Petersburg – you’re bound not to like it the first time you try it. (There are also a slight number of people who fall in love with «гречка» at ‘first bite’ so to speak, let’s not forget about them but let’s also not focus too much on that tiny group of individuals.) After your first unpleasant experience with «гречка» there are two possible ways in which your relationship with it will progress. Scenario 1: you’ll smell it somewhere (it’s doesn’t matter if it is «в столовой» [in a dining hall] or «на кухне у русских друзей» [in your Russian friends’ kitchen]) and suddenly feel an instant urge – despite better judgment since you didn’t like it the first time you had it – to try it once again. You try it again and then your love for «гречка» is a firm fact of reality. Scenario 2: you’ll tell the story of your first encounter with «гречка» to someone and explain to them in detail how you just don’t get what the big fuss is about. The other person – be it a kind «бабушка» selling «семечки» [sunflower seeds] on the street in downtown Krasnodar or a fellow ‘expat’ while dining at an expensive French restaurant on Red Square – will then take time out of their busy day to inform you of how good for your body «гречка» is, how healthy you’ll become after eating «гречка» on a regular basis, and that you’re very silly for not liking it straight away once it will only do you good and you should be thankful for being introduced to it in the first place. «Гречка» is not only great because it is tightly connected with our favorite country Russia – Russia, for example, is the world’s largest producer of «гречка» since 2005 (when they beat China to it!) – in many ways, both cultural and historical and «гречка» even kind of smells like Russia (at least to my nose); «гречка» also lowers cholesterol, helps clean the body from heavy metal ions and protects against cardiovascular illnesses. And here’s another reason why «гречка» is worth paying a tribute to today: because it takes a long time for the body to absorb and thus that means you’ll feel full for a really long time after eating «гречка» and feeling full is a great thing, don’t you agree? 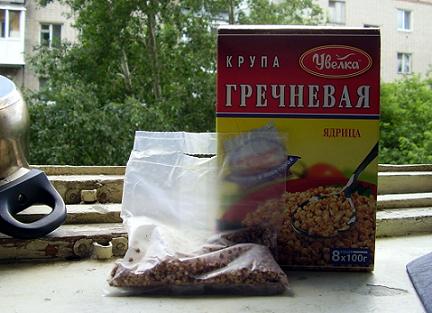 Now the question that arises is: how to cook «гречка»? Well, there are lots of lots of ways to do it! The easiest way – and perhaps only available in Russia – is to buy the kind of «гречка» that comes pre-packed into small plastic bags of 100 grams ready made to cook for 15 minutes on medium heat.

The magical thing about «гречка» is that you can cook it for every meal of the day: «на завтрак» [for breakfast], «на обед» [for lunch] and «на ужин» [for dinner]. With «гречка» you can never go wrong no matter what time of the day it is! For example, for breakfast you can make «каша» from «гречка» by boiling it and then eating it with «молоко» [milk], perhaps adding a splash of «варенье» [jam] or some «корица» [cinnamon]. Or you could skip all of the above and have a real rough Russian country style breakfast with just adding «масло» [butter/oil] and «сол» [salt] and downing it with some «чай» [tea] – and save the «варенье» for your tea and you’ll have yourself a true classic meal to start the day! Having «гречневая каша» for breakfast is not only the ‘patriotic choice’ but also the healthy choice; plus it will keep you going strong and feeling full all the way until lunch!

For lunch or dinner you can boil or fry «гречка» and serve it in a way that the Russians call «гарнир» [garnish; trimmings] with whatever comes to mind – «мясо» [meat], «курица» [chicken], «рыба» [fish] or «овощи» [vegetables]. It really does go well with just about anything. The important thing when dealing with «гречка» is to keep an open mind and remember: «гречка – это не только полезно, но и дёшево» [buckwheat is not just healthy but also cheap]. Here in the Urals people are much simpler than in the European part of Russia – it’s not only my personal opinion, they say so themselves – and rather easy-going when it comes to food. For a person living in the Urals fried «гречка» is best served up plain «с майонезом» [with mayonnaise]. Do you wonder why? Yekaterinburg is largest consumer of mayonnaise per person in the world – once again, not my personal opinion but stated as a historical fact in the Guinness Book of World Records. To make your meal taste ‘more Russian’ the easy trick is to add «укроп» [dill] or «петрушка» [parsley]. Something that is really tasty is to fry onions with mushrooms, then add these two spices – use both for increased sense of the Motherland – and serve it together with «гречка», of course! 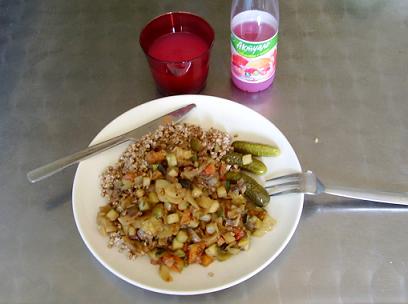 Here’s another serving suggestion – my favorite, as a matter of fact. Cook «гречка» and fry up some «рагу» [ragout; vegetable stew] – serve together with a few «маринованные огурцы» [pickled cucumbers]. You can also add a splash of the best ketchup I’ve ever tasted – «кетчуп русский с укропом» [Russian ketchup with dill]. Probably it’s only available in Russia! Anyway, it is a miracle and amazingly tasty!

I’m a really huge fan of Russian cuisine. And I think that many of you who read this blog are just like me when it comes to Russian food – that you also get weak in the knees when thinking of «блины», know your exact favorite kind of «огурчики» [pickles – now that’s diminutive of cucumber for you!] and tell a homemade «оливье» [traditional Russian New Year’s salat] from a store-bought one. That’s why I think we should have a couple of more posts about Russian food this summer. Don’t you agree? Well, writing this post has made me really hungry. I’m actually going to go cook me some «гречка» for lunch right now…