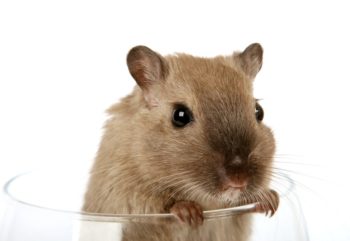 Let’s continue with the Spanish words of Germanic origin:

Falda: From Old Hogh German faldan, which meant “to fold”, it became the noun for “skirt” in today’s Spanish.

Fresco: From Germanic frisk, meaning “fresh”. One may notice the Germanic adjective ended up appearing in many languages, like French (frais), Portuguese (fresco) or Italian (fresco).

Guarecer: From the Spanish verb guarir, meaning “to shelter or to take shelter”, it came from Germanic warjan, the root for the German verb wehren, “to defend”.

Hámster: from German Hamster, which in turn came from Old German hamustro. This word appears with the same form in English, Dutch, French, Portuguese and many other languages.

Kindergarten: from German Kindergarten—a composite noun literally meaning “children garden”—, it is used to refer to a nursery school and is a synonym of jardín de infancia. In Spanish, it may be also written as kínder.

Leitmotiv: from modern German Leit-Motiv, it is a way of calling the main subject or recurring theme in a literary work or film. In Spanish, it must be written in italics. In English, it is written as “leitmotif”.

Rico: From the Germanic noun rīk for “king” and through the Gothic reiks, this Spanish adjective is used in the same varied ways as its English counterpart rich. As with the old frisk, rīk and reiks left their mark in many other modern European languages: rico in Portuguese, riche in French, ricco in Italian, and so on.

Yelmo: From Germanic hĕlm, it means “helmet, as part of an armour”. It is a cognate of modern German Helm and Old English helm.