European and Latin American Spanish (with videos!) Posted by Paula on Feb 19, 2016 in Videos 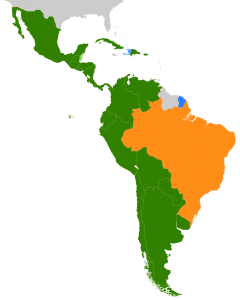 Of course, differences in vocabulary between a speaker from Mexico and one from Chile may actually make a conversation impossible, as we already saw in this video Qué difícil es hablar en español, but for commercial purposes mainly, Latin American Spanish is an accepted variant of the Spanish language. The language learning, the audiovisual and the localization industries actually try as hard as they can to fit the 22 language variants in one of these two categories (European or Latin America).

The main and most obvious difference is in pronunciation: European Spanish retains the zeta /θ/ sound while America uses plain ese /s/ sounds. Another important difference lies in verb conjugations. European Spanish uses vosotros for second person plural (Vosotros estudiáis español), while in America we use ustedes (Ustedes estudian español). This is a huge difference, anyone will guess where you studied Spanish if you use one in the context of the other.

The last difference we will mention today is in the use of verb tenses. In Latin America, we can use the simple past [pretérito perfecto simple in Spanish] to refer to an event that has actually just happened, even two seconds ago. In Spain, they refer to this kind of events (in the recent past) with a past perfect tense [pretérito perfecto compuesto in Spanish]. Some examples could be:

Translation and dubbing of The Simpsons is done for two markets: Latin American and Spanish. You may remember an episode where Bart Simpson becomes famous with a punch line: “I didn’t do it”. Here you have the two versions. Compare and decide which sounds better in Spanish!

This is the Latin American Spanish version:

And this is the European Spanish version:

You may also note that in the LA Spanish version the recording producer says: “Bien, chamaco“, while the European one goes: “Lo borda” (which means “He nails it”). In English, he says something like “Hey, propa”. Which do you think it’s the best translation? How would you have done it?

About the Author: Paula

Born in Buenos Aires, living in Barcelona, I mostly write about cultural topics in Spanish from Spain and Latin America.