A few days ago I was having a drink with a friend, when we saw something that caught our attention: a woman came to a table next to us, and offered to read the cards to the couple sitting there. However, cartomancy is not the point here, it’s only the reason why I’m talking about the instrument she used in her “reading”: the “Baraja española” (Spanish deck of cards). Although it was very funny listening to her predictions…

Our baraja goes back to the 14th century, and it consists of four different pictured suits, known as palos:  oros (gold coins), bastos (sticks), copas (cups) and espadas (swords). Each suit is made of 10 cards from one to seven, plus sota (card number ten in the figure of a page), caballo (eleventh card, literally “horse”, representing a knight) and rey (the king, number twelve). We rarely use eight and nine in our card games.

One distinctive characteristic in our cards since the 15th century is the use of pintas, discontinuous lines in the upper and down parts of the rectangle surrounding the picture of the card, which help players identify which cards they hold while not opening them up too much: none in oros, one in copas, two in espadas and three in bastos.  I’m afraid cheaters wouldn’t be very happy, don’t you think?

There are several interpretations about the meaning of the pictures in the several palos, but the most widespread one relates them to the four medieval social classes:

–         Gold obviously represents the monarchy, but it can also be related to the bourgeoisie when it became wealthy enough.

–         Cups are the church, due to the similarity with the Christian chalice.

There is a very different one I found very interesting. The story says that a tavern keeper was the inventor of the different palos. He had a deck of cards, which he lent his clients to play. Therefore, the copas would represent the tavern and the drinks people get in there; oros the money used to pay the drinks, and bastos and espadas the objects they used to solve their differences!

The most popular games are the mus (in two-player teams, a game of Basque origin), the brisca (another trick- tacking game you can play alone or with a partner), the cinquillo, the ronda, and my favourite one when I was a child, the mona, because there was a sentence we told the loser: “Aunque la mona se vista de seda, mona se queda” (You can’t make a silk purse out of a sow’s ear). We even made him/her dress with some eccentric clothes to have a laugh. Although I think it was not so funny when the loser was me… Anyway, if you want to play some manos (to have a game), just let me know and I’ll give you the instructions. Any bets? 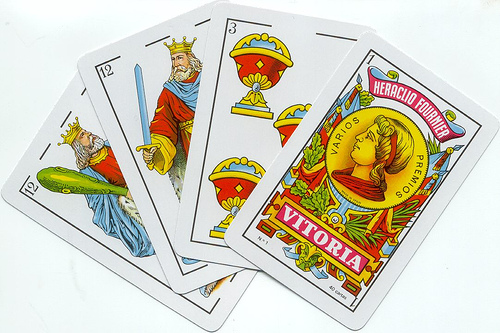