Mexican Spanish in 11 Phrases Posted by Jakob Gibbons on Sep 23, 2015 in Spanish Vocabulary

Many people immediately associate Spanish with its namesake country in Europe, but actually Mexico is by far the largest Spanish-speaking country in the world. Its more than hundred million inhabitants have taken this global language and in many ways made it their own: in Mexico, se habla mexicano.

I recently spent about 8 months traveling across the giant country and living in its capital, where I had the pleasure and frustration of learning some of its voluminous and vibrant body of slang. One thing I learned was that, as always, the language gives you some special insights into the culture of its speakers. 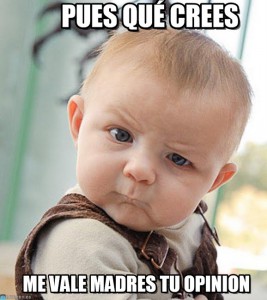 “Well what do you think? Your opinion is worthless to me.” Me vale madres is just one of many slang uses that equate madre to a lack of worth or even identity.

Many people would assert that Mexican Spanish is among the most colorful of the world Spanish dialects. CNN México calls Mexican Spanish “sexista, machista y festivo.” And indeed, there are plenty of entries in the Diccionario de Mexicanismos to support this idea.

That same article coloring Mexican Spanish as a particularly dirty and sexist subset of World Spanish also admits that it is “festivo, íntimo, y cariñoso“, another side of the language that I know and love. From being called mijo to being told by others “me caes bien“, I got to experience the many everyday petnames and other expressions people use affectionately with friends and strangers alike.

You should make up your own mind on what you think of the particular variant Spanish spoken in Mexico. The Diccionario de Mexicanismos lists 16,000 entries (¡qué absurdo!), but here I’ll limit it to a super arbitrary 11 of my favorites: 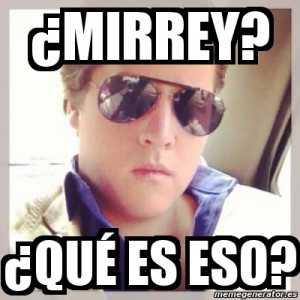 Have you heard these or similar expressions in other Spanish-speaking countries? What are your favorite Spanish slang expressions and where are they from? Tell us in the comments!