Saying Thank You in Swedish Posted by Marcus Cederström on Jan 25, 2017 in Vocabulary 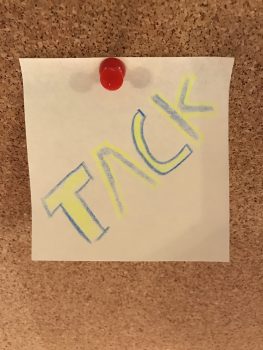 That’s a tack holding up a tack. Our readers from Göteborg will surely appreciate this. Photo credit: Marcus Cederström

As you learn a new language, it’s handy to have a few words in your vocabulary pretty early on. Learning a couple of variations on “thank you” is a good start. There are a lot of different ways to say “thank you” in Swedish so let’s take a look at a few examples.

The first is the easy one, the simple one, the common one: tack. It means “thanks” or “thank you.” Make sure you get that “c” in there otherwise you spell the Swedish word for roof. And that’s not quite as helpful. Use this word liberally.

Relatedly, there’s tusen tack, “a thousand thanks” and stort tack, “big thanks.” Both are used to express a solid chunk of gratitude. Your friend just helped you move into a third story apartment on a hot and humid day in August? That friend deserves a stort tack. And some pizza.

Then you’ve got a way to say “thank you” that really emphasizes the person you’re thanking. Tack ska du ha, for example, translates literally as “thanks shall you have,” which is not a great translation, but makes it clear what you’re doing. This is another phrase that is a little more grateful than just tack, you’re saying thank you very much, emphasizing that you. When you call the bank because you messed up and paid your credit card bill two days late, and the person you speak with waives your fees and says no worries, they deserve a tack ska du ha. You’re grateful and you’re especially grateful to that particular person.

You can also say tackar. When you say (or hear this), you’ll often hear it alone. Just tackar. But you may occasionally hear jag tackar or man tackar, “I thank you” or “one thanks you.” It can sound pretty formal if you don’t drop the pronoun, but it’s another great way of thanking someone and you’ll see it used pretty regularly.

Know a few other ways? Let us know in the comments!