Lego was founded in 1932 in Billund, Denmark. The name of the company is a portmanteau combining the Danish words leg (play) and godt (well). Play well. Lego. Cute, right? But the word lego has existed in Swedish for quite some time, albeit in a much more sinister context. Legosoldat is the Swedish word for mercenary.

This is one of those words that I associate with tiny little Lego people that I played with as a child. They were easy to buy at the store, just like a mercenary—a legosoldat—would be easy to buy, if that was a thing you were into. That’s a false etymology and has nothing to do with the word at all. Not even close. 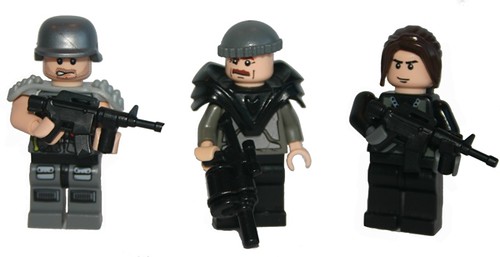 I have stepped on so many of these poor little Lego soldiers in my life. “USDF soldiers” by Brian Rinker – Own work. Licensed under CC BY 2.0 via Flickr.

This is where the historical linguists come in. Lego comes from the noun lega in Old Swedish. Essentially it means something that could be rented out. So legosoldat = soldier that can be rented out = mercenary. There are a few other words that you might see in Swedish that use lego as a prefix, for example:

So there you go. When you see the word lego tacked on to the beginning of a word in Swedish, chances are it has nothing to do with the toys.

Interested in practicing your Swedish by learning more about the etymology of legosoldat? Check it out Vad är det för lego i legosoldat.