Ayutthaya – The Ancient Capital (Part One) Posted by sasha on Jun 18, 2011 in Travel

After a few great days in the modern capital city of Bangkok, it was time to move on to the ancient capital of Ayutthaya (พระนครศรีอยุธยา). Founded in 1350 by King Uthong, this was the second Siamese capital after Sukhothai. It remained the capital for hundreds of years until the Burmese attacked and sacked the city in the late 18th century. It is thought that this city shows the beginning of Thai style “chedi” temples. Named a UNESCO World Heritage Site in 1991, Ayutthaya is know a popular destination for tourists, and it makes for an excellent day-trip from Bangkok.

Heading out early in the morning, we sprung for the soft seats in the air conditioned section of the train. If my memory serves me correctly, these were about 200 baht each, and were perfect for catching a few more Z’s before a busy day of sightseeing. On the way back we bought the cheapest tickets, which were only about 20 each. It was nice to relax on the early ride out there and then stand with locals peering out the open windows on the way back. 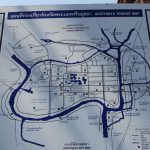 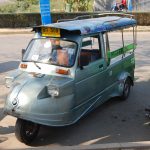 Our ride for the day.

Arriving in Ayutthaya bright and early, we were immediately approached by a few tuk-tuk drivers. With only one day to take in as many sights as possible, we bargained a little with one of the drivers who agreed to take us around all day. He turned out to be a great help and an incredibly friendly guy, as he recommended various temples for us to see and even a great place to eat lunch!

First up on our busy day of bouncing around the ancient city, we visited Wat Ya Chai Mongkon. This chedi was built in 1592 by Nareusan the Great to commemorate a victory over the Burmese, but the temple itself has been around since 1357, when it was built by King Ramathibodi for monks returning from piligrimages to Sri Lanka. We wandered around the temple grounds for a bit, admiring the chedi and the shrine to King Nareusan. 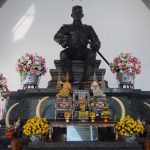 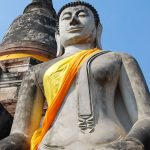 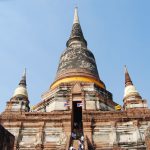 For our second temple of the day, we dropped by Wat Phananchoeng. This is one of the oldest temples in Ayutthaya, and it still remains quite busy to this day. The highlight of this Wat is a massive Buddha statue dating back to 1324 around which the temple was built. Standing at 19 m (63 ft), this massive statue barely fits into the main wiharn of the temple. Around the big Buddha are tons of smaller Buddha statues, each representing a personal donation to the temple. 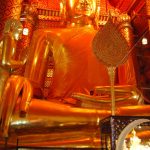 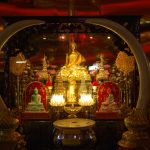 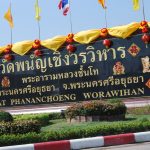 For our third temple, we headed into the inner city to visit Wat Mahatat. Built in the late 14th century by King Borommaracha I, this temple was built to house the Buddha relics that suddenly appeared after the King had a revelation. Without a doubt the most impressive sight at this temple, and possibly in all of Ayutthaya, is the image of a Buddha head entwined within the roots of a tree. When visiting this temple, it is important to to observe the unwritten rules of etiquette; for example, one should only take a photgraph of the sacred Buddha image from a kneeling position. 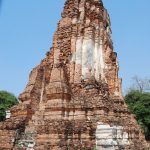 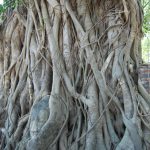 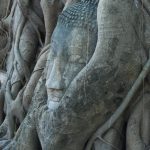 For our last temple stop before a lunch break, we bounced right over to Wat Ratchaburana, which is right next door to Wat Mahathat. Established by King Boromaraja II in 1424, this is the symbolic center of the old city. It was built to hold the ashes of his two elder brothers, who killed each other in battle while fighting over the throne. 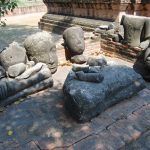 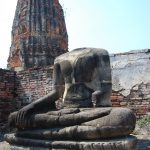 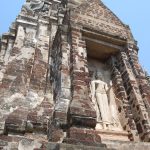 After a full morning of Ayutthaya’s ancient temples and ruins, we were ready to take a rest and get some food. Luckily, our driver knew just the place to go, as he took us to a peaceful and scenic restaurant on the banks of one of the rivers that run through the city. Actually, Ayutthaya was formed by the confluence of three rivers: the Chaophraya, Lopburi and Pasak. For lunch, we enjoyed some delicious vegetarian spring rolls, some spicy and flavorful pork, and some refreshing iced milk tea. Once again, Thailand had delivered with an amazing morning of informative, eye-opening sightseeing, and an impressive lunch in a perfect setting. Best of all, we still had a few more hours to romp around the ancient city before catching the train out of town.