After our amazing riverside lunch, we jumped back in the tuk-tuk and headed out to take in a few more temples. First, we headed to Wat Phra Si Sanphet (วัดพระศรีสรรเพชญ์). Originally built in 1448 as the king’s private chapel, this temple features three chedis that contain the ashes of three former Ayutthaya kings. The image of this temple is one of the most famous, and for good reason. We took our time strolling around the grounds, stopping occasionally to cool off under the shade with some cold water, as a full day of walking around outside in Thailand can get pretty draining with the heat. 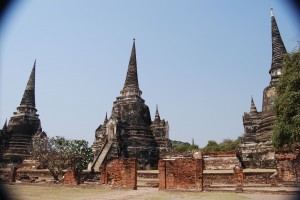 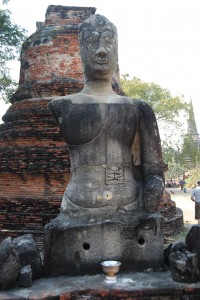 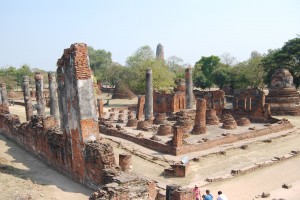 The entire compound where this temple is located is known as the Grand Palace or Ancient Palace of Ayutthaya. After walking around the ruins, we headed inside to see Phra Mongkhon Bophit (วิหารพระมงคลบพิตร). A gold Buddha statue was cast and covered in gold during the time of King Ramathipodi, and the invading Burmese tried to melt it down in 1767. This caused a great fire that destroyed both the Buddha and the temple. As such, the figure you see today is a replica, as it was restored in 1956. 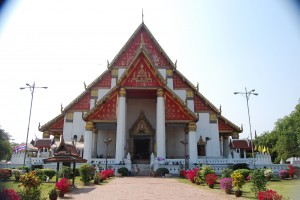 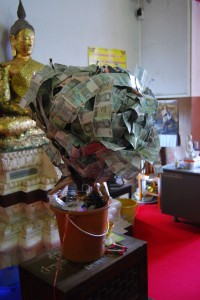 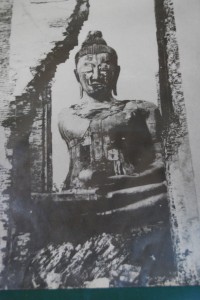 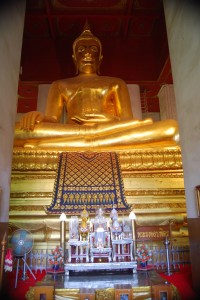 For our final stop of the day, we visited the riverside Wat Chai Wattanaram (วัดไชยวัฒนาราม). Located on the banks of the Chao Phraya River, this temple was built in 1629 by King Prasat Tong. The name literally means “The Temple of Long Reign and Glorious Era”, and it is believed that the temple was built on the site of the king’s mother’s cremation. As is the case with just about everything in Ayutthaya, this temple was basically destroyed during the Burmese invasion. Restoration began in the 80’s and it was opened to the public in 1992. This beautiful temple, rich in history and tradition, was a fine way to end our day-trip to the ancient capital 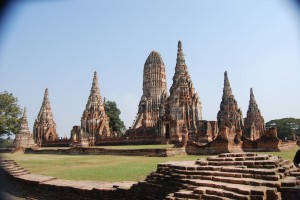 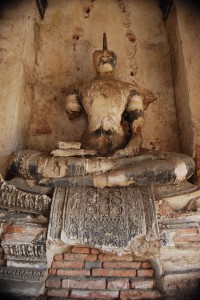 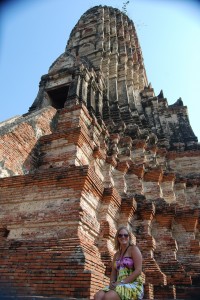 We managed to pack a lot into one day in Ayutthaya, but I do wish we would have been able to stick around for another day. Our tuk-tuk driver’s patience and kindness certainly helped us pack so much in, and we made sure he understood our gratitude, despite the slight language barrier. Back at the train station, we opted for the cheap seats (20 baht each), and I stood with locals admiring the scenery outside of the train. A few short hours later, and we were back in Bangkok. Our next order of business was hopping the overnight train headed north for Chiang Mai.