For our second day in Bangkok, we headed out to do some temple hopping. Arriving outside of the Grand Palace (พระบรมมหาราชวัง), we were informed that a special ceremony was going on and that the grounds would not be open to tourists for another couple of hours. Thankfully, we didn’t have to come up with alternate plans ourselves, as the guard who was talking to us quickly hailed a tuk-tuk and bargained with the driver to show us around for a while before we could come back and get into the Palace. Darting in and out of traffic on Bangkok’s insanely busy streets, we soon found ourselves looking up at a massive Buddha statue at Wat Indraviharn. This 32-meter standing Buddha was commissioned by King Rama IV in the mid-nineteenth century to enshrine a relic from Sri Lanka. 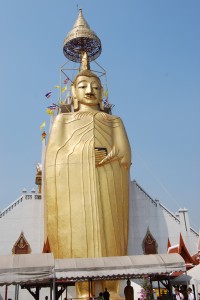 On our way out, while waiting for our driver, a local Thai man struck up a conversation with us about our trip. When we told him that we were planning on eventually going to Chiang Mai, he asked us if we had booked anything yet. We explained that we were just kind of winging it on this trip, and that we were just going to figure it out when we got there. He told us that with Chinese New Year going on, it might be difficult to get train tickets and hotel rooms in Chiang Mai, and he advised us to visit the Tourism Authority of Thailand office in Bangkok to secure travel plans. After he gave directions to our driver, we were on our way, and we thanked him for the sound advice. Our day had barely started and already we had been helped twice by incredibly friendly strangers; this was another reminder of the good nature of Thai people.

At the TAT office, we managed to not only book sleeper tickets on the overnight train to Chiang Mai and a hotel there, but also a three-day jungle trek, a day trip to the Golden Triangle, and slow-boat tickets to Laos. Talk about convenient! It was nice knowing that for the rest of the trip, the only planning we’d have to do was where and what to eat. 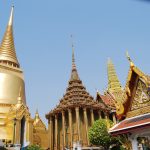 Travel plans secured, we headed back to the Grand Palace. Arriving at the gate, we were told that our attire was not 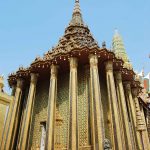 It sure is beautiful...

appropriate. When visiting holy sites in Thailand, men should wear pants and ladies should have their shoulders and knees covered. I bought a pair of silly elephant pajama pants and Rachel borrowed a scarf, and we were finally ready to go in. Inside of the Palace is Wat Phra Kaew (วัดพระแก้ว), the most sacred of all Buddhist temples in Thailand. A group of stunningly beautiful holy buildings and monuments, this temple also houses the Emerald Buddha (พระแก้วมรกต), made of green jadeite and clothed in gold. This sacred Buddha is said that have been created in India in the year 43 BC, eventually ending up in Bangkok thanks to King Rama I in 1784.

Built in 1782 by Rama I after he moved the capital from Thonburi to Bangkok, the Grand Palace housed the King for many years, although the current King resides in the Chitralada Palace. The palace still gets used for things other than tourism, though, including: coronations, royal funerals, marriages and state banquets. 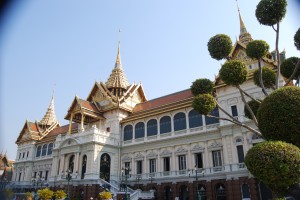 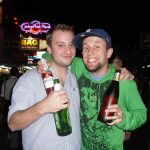 All smiles when it comes to Bangkok nightlife.

After wandering around Thailand’s most holy site during the day, it was only fitting that we went to Thailand’s sleaziest district in the evening – Patpong. In short, this red-light district is where Bangkok earns its reputation as a city with insane nightlife. Full of neon lights, go-go bars, and ladyboys, this is where you go for the infamous “ping pong shows” and other X-Rated activities that would terrify your grandmother. Walking along the street can be intimidating, as street vendors vie for your attention while bar promoters desperately try to get you (and your baht) in the door.

We started our evening in Patpong at an Irish bar with beers and fried food. Next up, we picked up some big Chang bottles from a little store and wandered around the night market, admiring the fake Rolexes and knock-off clothing. Eventually, we were lured upstairs to a bar with promises of a fantastic show. For those planning a trip to Bangkok, learn from our mistake and do not, I repeat DO NOT agree to go into a bar that is upstairs. That’s how they trap you. Before we even sat down, we were swarmed by about ten women. When my friend ordered three beers, they also brought out ten Cokes for themselves. Nice try, ladies. We made it perfectly clear that we were not interesting in buying them insanely overpriced Cokes. After witnessing a few disturbing “tricks” be performed on stage, we were ready to get the hell out of there. Cue a large bill for the “show” and the beers.

Having had our fill of the go-go bars after just one, we decided to check out one of the many ladyboy bars. Free of the pushy touts and demanding bartenders, this place was much more enjoyable. Petey and I kicked back with our beers while Rachel had a good ole’ time flirting with the dancers. Glancing around the bar at the crowd that was assembled, I made a quick promise to myself to never, ever let myself end up a fat, bald, old white guy sitting in a ladyboy bar in Bangkok by myself.

Although our time in Bangkok was short, it was damn good. While we certainly didn’t get to do everything that this Asian metropolis has to offer, we managed to fit in a nice mixture of sightseeing, partying, and local culture. Alas, it was time for us to bid farewell to our good friend and Thailand’s capital city, and so we boarded the overnight train headed north to Chiang Mai.