Day Trip to Chiang Rai and the Golden Triangle Posted by sasha on Aug 23, 2011 in Culture, Travel

Making our way up through Thailand and towards the 2-day slow boat down the Mekong River into Laos, we lined up one last adventure – a day trip taking us through Chiang Rai to the Golden Triangle. As we were quite exhausted from the incredible jungle adventure with Book, we struggled to get out of bed for this one, and begrudgingly crammed into yet another mini-van for a jaunt across the Thai countryside. An hour or so into the drive, we made a pit-stop for breakfast, where we were also able to admire a small natural hot spring. At this point in the trip, we both wanted nothing more than to somehow sneak back to our hostel in Chiang Mai and crawl back into bed. Luckily for us, the next stop would liven us up a bit. 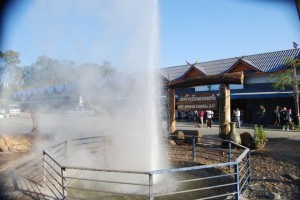 Just the thing you want to see on a road trip when you really have to go... 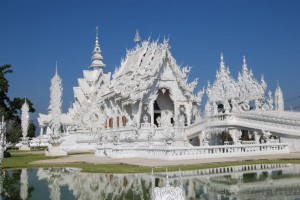 Once again stumbling out of the van and rubbing the sleep out of our eyes, we were stunned by the sight before us – Wat Rong Khun (วัดร่องขุ่น). This contemproary Buddhist and Hindu temple is not your run-of-the-mill temple, to be sure. Designed by Thai visual artist Chalermchai Kositpipat, this gorgeous shrine is entirely white, with some use of white glass. As the story of this temple goes, the white color stands for Lord Buddha’s purity; the white glass stands for Lord Buddha’s wisdom that “shines brightly all over the Earth and the Universe.” Outside of the temple, a circle with fangs is meant to be the mouth of Rahu, which represents hell or suffering. Right before the bridge, the small semicircle represents the human world. Finally, the bridge itself represents the crossing over from the cycle of rebirth to the Abode of Buddha. Around the bridge, hands reach up from the great below, some holding skulls. Inside the temple itself (where photography is prohibited), fantastic, eye-popping murals leap off the walls, and include strange images such as Batman and Neo from the Matrix. Work began on this temple in 1997, and will continue until it eventually consists of nine buildings. After seeing hundreds of temples during my time living in China and traveling in Korea and Thailand, I’m usually less than ecstatic when a tour or a hike winds up at yet another temple, but Wat Rong Khun may have just changed my mind. 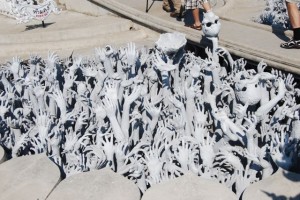 A little creepy, isn't it? 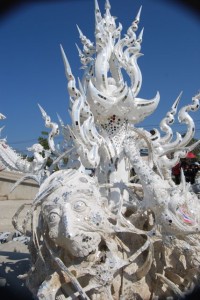 On the way to the Abode of Buddha. 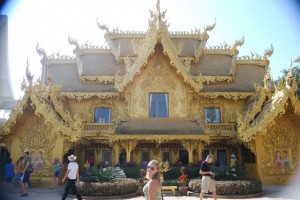 By far the coolest bathrooms ever. 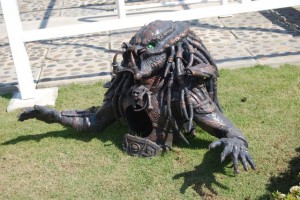 Alien coming out of the ground?

Next up, we headed to the Golden Triangle (สามเหลี่ยมทองคำ) – the spot where Thailand, Laos, and Myanmar (Burma) all meet on the Ruak and Mekong rivers. Although this area is predominantly known for its production of illicit opium, the Thai government is working hard (or at least saying they are) to turn this scenic spot into a tourist attraction, rather than a junkie’s paradise. While most of our group paid an extra fee to take a quick boat ride over to Laos, we opted out, seeing as how we’d soon be spending 48+ hours on a boat headed there anyway. Instead, we admired the scenery, and relaxed by a small riverside shrine. 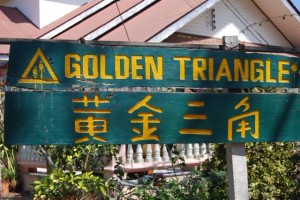 Former opium capital of the world. 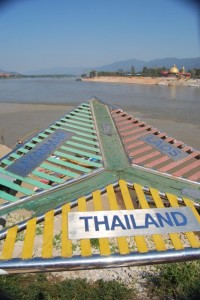 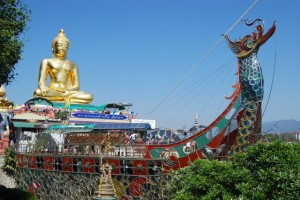 We kicked it with Buddha while others rode the boat.

After a big group lunch, it was once again time to load up into the van and head out. In my humble opinon, the next stop was rather pointless, as we pulled over just to catch a glimpse of the Burmese border. We were told that we could pay a small fee to step into the country and get our passports stamped. Personally, if I’m going to visit a country, I’d actually like to visit it, and I don’t see the allure in simply getting a stamp. Oh well… 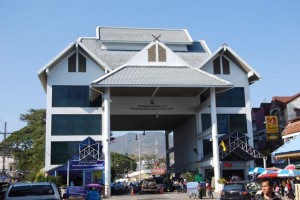 Burma is behind there... cool? 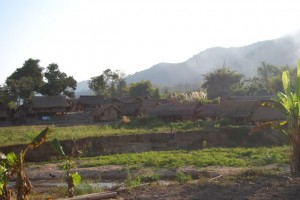 Looking at the Longneck Village.

Last up, we visited a “Longneck Village,” which was out in the Chiang Rai countryside. The small village is inhabited by the Padaung, a sub-group of the Karen hill tribe who escaped from Burma to Thailand in the mid 1900’s and are actually political refugees. They are called “long necks” as the women wear brass rings on their necks, thus distorting their collarbones and making them look as if they have long necks. Young girls begin wearing these rings around age 5 or 6, and some women will come to have up to 20 rings. While I was hoping for an interesting cultural experience, what I got was more of a “culture zoo,” as the village is constantly flooded with tourists and the many shacks along the way simply serve as handicraft shops. Although I felt bad for the women there, I had to remind myself that they certainly make a better living by opening up their village to tourists than they would working in the fields, and they are at least somewhat protected in this environment. It was a bit of a downer-note to end the day trip on, but then again we were dead tired and ready to head back to Chiang Mai either way. Even though the white temple was an amazing sight and the Golden Triangle was interesting, I would advise fellow travelers to skip over day trips like these while visiting Thailand. Live and learn, I guess! 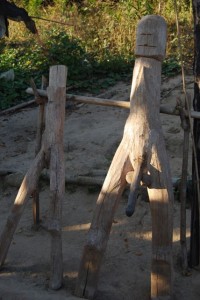 Statues outside of the village... maybe a little bit exaggerated? 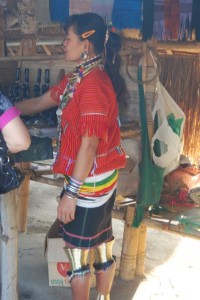 A local woman selling handicrafts - her neck wasn't as long as others... 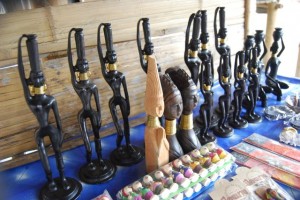