After our romp through the jungle of Khao Sok National Park, we caught a bus to Krabi, a city on the Andaman Coast. This was just a pit stop, however, as we had our hearts set on the Phi Phi Islands (หมู่เกาะพีพี), a series small islands renowned for their stunning beauty and incredibly laid back atmosphere. With boat tickets already in hand, our next step was securing accommodation for our stay. Luckily, this would prove to be quite easy, even though we were traveling during peak season. As tourism is the main industry of Thailand, there’s never a shortage of eager travel agents ready and willing to help you lock down transportation and/or a place to stay. At the bus station in Krabi, we were helped by a hilarious and extremely friendly guy who not only made sure we found a semi-cheap room, but who also drove me on his moped to find an ATM. While you obviously pay a little bit extra for such services, it’s well worth it for the convenience and peace of mind, especially when traveling in Thailand during the busy months of December and January. In the slower months, finding a room on arrival is no problem, even in popular hot spots like Phi Phi. 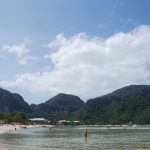 Of the Phi Phi Islands, only one is inhabited – Ko Phi Phi Don (เกาะพีพีดอน). Located on Ton Say Bay, Phi 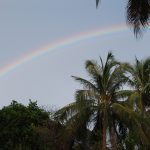 Rainbow sighting on the beach.

Phi Don is almost separated into two islands, but a small slice of land connects them. Arriving on the island, visitors must first pay a small entrance fee. This is used to help keep the island clean, which has become more of a task in recent years thanks to the development of its tourism. The first thing that struck me about Phi Phi was its lack of roads and cars. Locals bus goods around by wheelbarrows, and aside from the occasional sighting of a motorbike, everyone gets around on foot. Seeing as how you can walk from one side of Phi Phi Don to the other in around 10 minutes, this is one of the best attributes of this island. Especially for us, coming from the noisy, crowded, and polluted streets of Beijing, the lack of motor vehicles was a blessing.

Days on Phi Phi are best spent enjoying the picturesque beaches, which are protected as a result of their National Park status. In between sun-bathing and tossing the Frisbee in the water, we headed up the trail to check out the viewpoint. Providing a fantastic panorama of the island and its surroundings, the viewpoint is definitely a postcard worthy image. 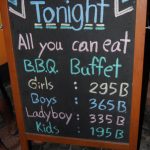 Ladyboys have to pay just a little more than girls. 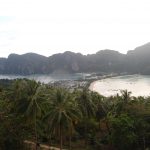 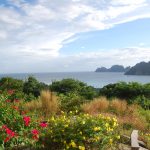 More from the viewpoint.

When nighttime rolls around, there are plenty of options for wining and dining to keep you entertained. Strolling around the island, we stopped in a beach side restaurant with a selection of fresh fish on display. For just 200 baht (about $7) each, we were treated to a red snapper, grilled to perfection, accompanied by baked potatoes and a salad bar. With the peaceful sounds of the sea in front of our table and a delicious dinner on our plates, our satisfaction with our vacation destination was reinforced yet again. 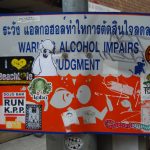 Don't get drunk and make out with fish... 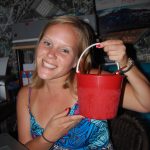 Cheap buckets = beginning of the end.

In terms of night life, Phi Phi Don has a variety of bars, ranging from the Jordan’s Irish Pub (where we 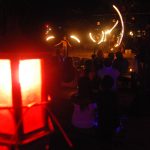 got irresponsibly drunk on cheap buckets of liquor), to the Reggae Bar (which plays absolutely zero reggae music and features Muay Thai boxing), to the beach side Hippies (which openly offers joints to guests; probably to enhance the fire show experience). Alternatively, you can always throw back big bottles of Chang beer in front of the 7-11, which seemed to be one of the most popular activities amongst backpackers.

If you should find yourself a bit bored with the beach, viewpoint, bar routine, there are also plenty of options for day trips. We joined in one that was supposed to include cliff jumping and snorkeling, along with a visit to the monkey island. Sadly, mother nature had other plans for us, as the rocky waters wouldn’t allow our boat to dock at the cliff or the island. Thanks to our fun-loving guides, though, this excursion was still a highlight of our trip. Bouncing up and down in the choppy waters, getting soaked by the waves crashing against our boat, our guides were determined to show us a fun time. As such, they spent the ride joyfully singing songs while simultaneously slugging Thai whiskey straight out of the bottle. This was further proof of something we had already discovered on our trip – Thai people know how to have a good time. 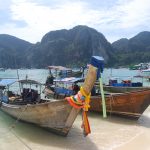 It had been a relaxing and entertaining couple of days on Phi Phi, but it was once again time for us to move on. After an incredible two weeks spent traveling from the Gulf to the Andaman Coast, it was time to head back to the big city on a 12-hour bus ride to Bangkok.