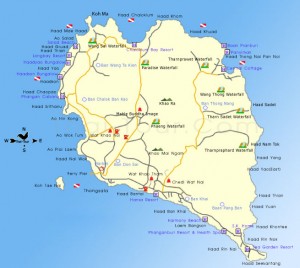 After our one-night stay on Koh Tao, we headed back to the pier to catch the early ferry bound for Koh Pha-Ngan. With the memory of the previous day’s boat ride from hell still fresh in our minds (and stomachs), we opted for the VIP seats on the upper deck. The 100 baht fee each proved to be a worthy investment, as the ride was comfortable and motion-sickness-free. In the Thai southern dialect, “Ngan” means “sand bar”, and so this island was named for its bounty of sand bars. This island, which once was a personal favorite vacation stop for King Chulalongkorn (Rama V, 1869-1910), now attracts thousands upon thousands of Northface backpack carrying, Lonely Planet reading, electronic music listening tourists every month for its world famous lunar bash.

Due to the Full Moon Party that would be taking place that very evening, I had booked accomodation ahead of time. Wanting to be close enough to the night’s festivities to take a quick cab ride there and back, but yet far enough away from it to be able to sleep at 7 a.m., I booked a beachside bungalow at a place called Coco Garden. In the month we spent traveling around the country, this place was by far my favorite. From the hammock on our porch, the beach was just a few footsteps away. A laid-back beachside bar/restaurant was the icing on the cake, and when combined with the friendly staff and fellow guests, this was a perfect place to call home for four nights.

With no more trains, buses, or boats to worry about for a few days, I finally spread my towel out on the beach, grabbed a drink and a book, and did exactly what I had come to Thailand to do – relax. If the tales I had heard about the Full Moon Party were true, I knew that some good R and R was absolutely essential beforehand… 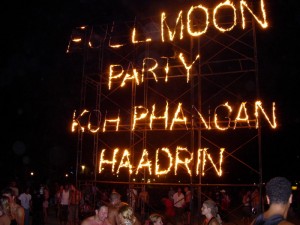 Way back in 1985 (the year that a certain awesome blogger just so happened to be born), Koh Pha-Ngan was just opening up to tourists. As such, the island that had been discovered some 2,000 years ago by Muslim sea gypsies was just starting to be rediscovered by adventure-hungry travelers. Not surprisingly, there are various accounts of how exactly the now legendary party began. One such story tells of a group of travelers who were staying on the island in 1987. To use a phone or send mail, the would take a fishing boat over to Koh Samui, so at this time Koh Pha-Ngan was still very quiet and remote. Every month on the full moon, the group would head over to the sunset side of the island, light a campfire, play acoustic guitar, and listen to music powered by a car battery. Well, as the years went on, more and more visitors started frequenting the beaches of Koh Pha-Ngan, bringing stories of the full moon gatherings back home with them. Years later, with the party getting bigger and bigger, the locals realized the money-making potential of this monthly party. Eventually, the party was moved to the other side of the island so that it could go on all night and revelers could enjoy the sunrise. As tales of the epic Full Moon Party spread around the globe by word-of-mouth, it just kept getting bigger and bigger.

All of these people sure love the moon...

A party that started out with a few folks gathered around a campfire with a guitar or two has evolved into a massive hedonistic celebration, attracting up to 30,000 people during the busiest months. The entire beach of Haad Rin is packed with party animals from every corner of the world; you might see a dreadlocked old hippie in tye-dye, dancing next to a guy who looks like he could star on “Jersey Shore: Europe Edition”, who is sharing a drink with a cute Australian college girl, who came to the party with her Japanese friend she met in Bangkok. It’s a veritable melting pot of wild and crazy people, and it’s fueled by ground-shaking bass, inhibition destroying Thai whiskey, and mind-altering “Happy Shakes.”

Bars all across the island set up stages outside with elaborate decorations, and DJs spin music until the sun comes up the next day. Some locals set up stands along the beach and the surrounding streets selling plastic buckets full of liquor. As Thai whiskey is actually cheaper than soft drinks, you don’t have to ask them twice to fix you up a stiff drink. Others sell glow toys and body paint, with some even offering temporary day-glo tattoos on the spot. As for the party-goers, they bounce around the beach and its many bars, stopping only temporarily to enjoy a safe and wholesome activity, like fire limbo.

From the viewpoint atop the “Mellow Mountain” bar, looking down on the throngs of moving bodies, it’s hard to imagine that this island was ever remote and peaceful. While I will admit to having just a little bit of fun at the Full Moon Party, I’d be lying if I said there weren’t a few times throughout the night that I wished I could just hop in a time machine and jet back to one of the original gatherings. What can I say, I prefer campfires and acoustic guitar sing-alongs to glowsticks and drum & bass.