Politeness in Thai Culture Posted by sasha on Jan 26, 2015 in Uncategorized

Politeness is a very important part of Thai culture, but of course there are differences between the Thai and Western ways of being polite. While the people in Thailand are generally quite friendly and understanding – which is not surprising considering tourism is the biggest industry in the country – a little politeness goes a long way. After all, wouldn’t you rather the Thai people actually like you rather than just tolerate you when you’re traveling in their country? For newbs to Thailand and Thai culture, here’s a beginner’s guide to being polite: 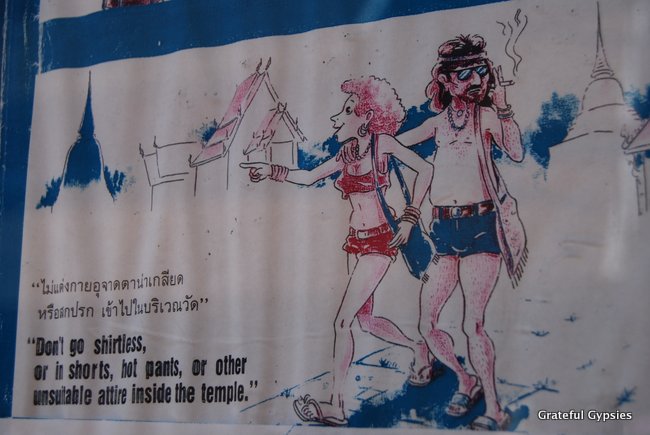 Start with doing the exact opposite of the people in this cartoon.

Thailand isn’t known as the Kingdom of Smiles for nothing. Thai people don’t expect you to speak their language, and they probably don’t speak yours, so a simple smile says a lot there. That shouldn’t be hard, anyways – whether you’re exploring a glittering temple, sitting on a beautiful beach, or digging in to a spicy papaya salad, chances are you’ll have a huge grin on your face throughout your entire trip.

Use the Polite Particles “Ka” and “Krap”

Even if you’re only going to learn the words “hello” (สวัสดี – sà-wàt-dee) and “thank you” (ขอบคุณ – kòp kun) in Thai, make sure you attach the appropriate polite particle. For women, that’s ค่ะ (kâ) or คะ (ká) and for men it’s ครับ (kráp). The reason there are two for females is that ค่ะ (kâ) is used at the end of statements, while คะ (ká) is used at the end of questions. To be polite, your hellos and thank yous should sound like this:

This is a simple and easy way to ensure that you’re being polite in any situation. As you learn more Thai, don’t forget to add the polite particles. There are certain situations where it isn’t necessary, but it’s better to just go ahead and play it safe by being extra polite. For more on how to use these particles, check out our video:

Learn How to Wai 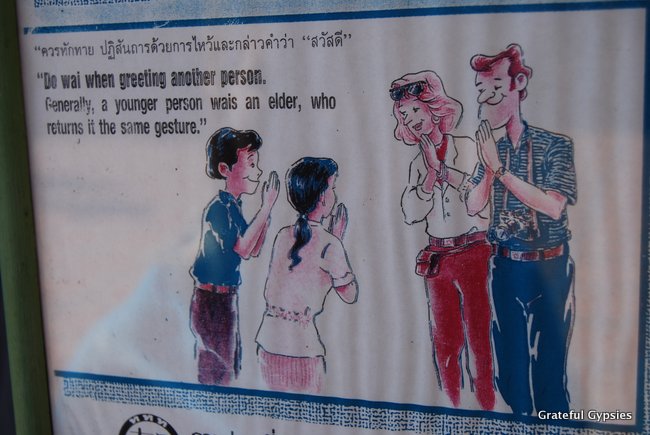 Get your wai on to be polite.

In Thailand, people greet each other with a wai (ไหว้), a slight bow with the hands pressed together in a prayer-like fashion. There are many different ways to wai, which gets deep into the heart of Thai culture. For newbies, an easy thing to remember is that the higher you place your hands and the lower you bow, the more respect you are showing. In Thai culture, the highest level of wai is reserved for monks – a reminder of the importance of Buddhism in everyday Thai life. As a foreigner, you’re not expected to give a wai first, but if someone wais to you it’s best to reciprocate. Here are two videos that teach you more about the wai – one in English and one in Thai:

ThaiPod101 goes over the wai in 3 minutes.

My Thai teacher showed me this video when I asked him how to wai.

Don’t Lose Your Temper, but Keep Your Face

As with many Asian cultures, the concept of “face” is important in Thailand. Face basically means your reputation, and it’s an important thing to take care of. As such, confrontation is looked down upon in Thailand – both parties involved will lose face through a public argument or fight. Should you find yourself in an undesirable situation – such as someone ripping you off – keep cool, relax, and do your best to move on without causing a scene. The loss of face and public embarrassment is not worth the few baht you might save. 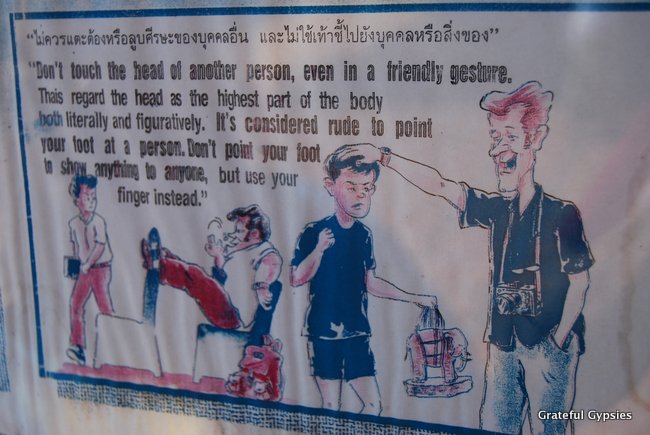 No go on the head patting in Thailand…

As the head is considered the highest and most honorable part of one’s body, it is extremely impolite to touch someone on the head in Thailand. While it’s fine to pat someone on the head in many Western countries, it’s a big no-no in Thailand. On the other hand (or should I say foot?), the feet are considered the lowest and dirtiest part of the body. As such, it is considered very rude to point your feet at someone, especially a monk or a Buddha image. Remove your shoes when entering someone’s home, and remember to sit cross-legged or in the mermaid pose. 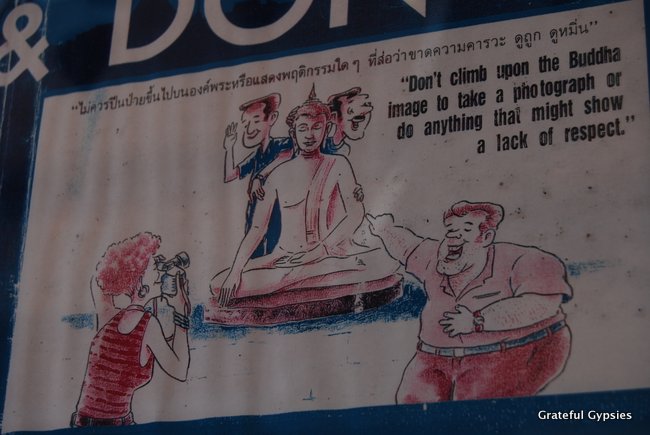 Please do not climb on the Buddha, you dumb farang.

Around 95% of Thais are Buddhists, and religion is a big part of daily life and the culture. Show proper respect at temples and around Buddha images to avoid dirty looks from passing Thais. For starters, leave your Full Moon Party singlet and booty shorts at home when visiting a temple. Gentlemen should wear pants and ladies should cover their knees and shoulders. Should you forget this dress code before going out, never fear – there’s always an enterprising Thai ready to sell you goofy elephant pants or a colorful scarf. 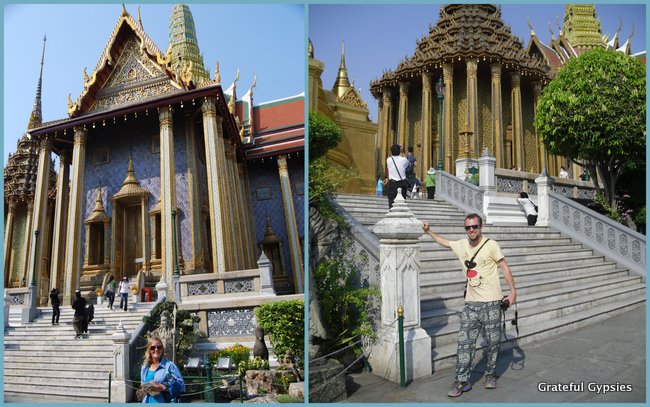 When it comes to Buddha images or statues, don’t climb on them or do anything that might be considered disrespectful around them. It’s actually against the law to show disrespect to Buddhism in Thailand, so this goes beyond just being polite! If you’d like to take your picture with a Buddha image, remember that you should be below the Buddha. 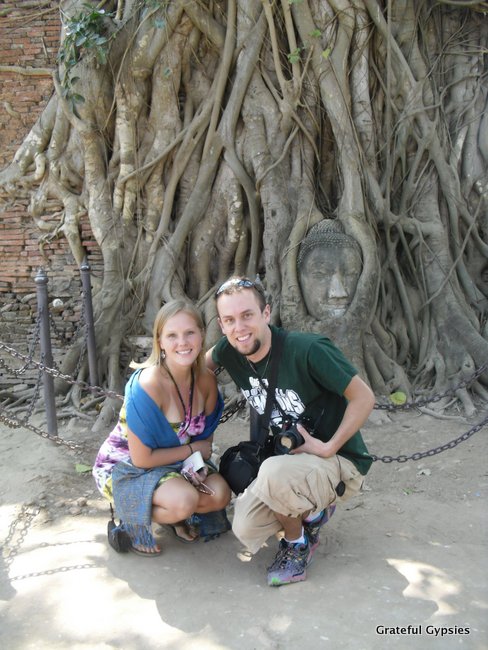 Stay below the Buddha for photos. 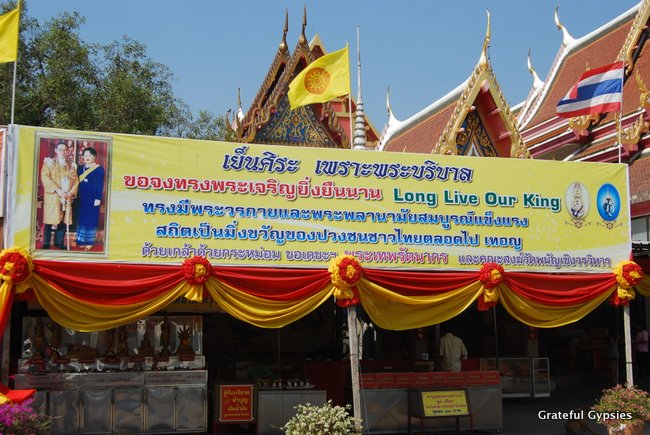 If you don’t have anything nice to say about the king, don’t say anything at all.

While you may be used to joking about one particular royal family with your British blokes, this is off limits in Thailand. Thai people love and respect their king deeply, and it’s actually against the law to criticize him. Twice a day, at 8am and 6pm, the Thai national anthem is played in government buildings, parks, and on university campuses. Should you find yourself in one of those places at that time, do as the Thais do – drop everything and stand still for the duration of the anthem, or impress them by singing along in Thai. It is also played in movie theaters before the show begins, so join the others in standing. As the king’s face is on the currency, it is also considered very impolite and a grave insult to step on any bills.

Obviously there’s more to being polite and culturally sensitive in Thailand, but this is a good start that will at least leave you many levels above your average Chang swilling farang. For further reading, check out this great article that includes plenty of aspects of politeness not mentioned here.