The beloved King of Thailand, Bhumibol Adulyadej (ภูมิพลอดุลยเดช), recently passed away at age 88. Also known as Rama IX for being the ninth monarch of the Chakri Dynasty, he was highly revered by the Thai people. He was the world’s longest-serving head of state and longest-reigning Thai monarch, having served just over 70 years. The official mourning period will last an entire year – a sign of just how much his people loved and admired him. Let’s take a look back at the long and amazing life of King Bhumibol and look forward to how his passing will affect Thailand.

Bhumibol was born on December 5, 1927 in Cambridge, Massachusetts. He was the youngest son of Prince Mahidol Adulyadej, who was enrolled in the public health program at Harvard University at the time of his birth. Sadly, his father passed away from kidney failure when Bhumibol was just two years old. From a young age, he developed a passion for photography and jazz, taking up the saxophone while living in Switzerland. In 1935, his uncle – King Rama VII – abdicated the throne. As the king was childless, it was Bhumibol’s older brother Ananda who ascended the throne at the young age of nine. Tragedy struck the family again, as Ananda was found dead from a gun shot wound just six months after returning to Thailand. The circumstances of his death remain a mystery to this day. After his brother’s death, Bhumibol became King Rama IX. He returned to Switzerland to finish his studies, at which point he met Mom Rajawongse Sirikit Kitiyakara. They were married on April 28, 1950, just one week before his coronation. 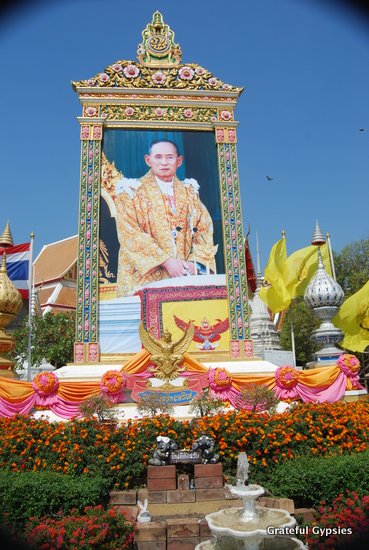 One of the many portraits of the king in Thailand.

Bhumibol was crowned as the ninth King of Thailand after presiding over the long-delayed ceremonial cremation of his brother. During the ceremony, he famously said:

“We shall reign in righteousness for the benefits and happiness of Siamese people.”

The date of his coronation – May 5th – is celebrated as a national holiday in Thailand, as is his birthday. His wife was made queen, and they had their honeymoon in the south of Thailand before returning to Switzerland for him to finish his studies. They went on to have four children together. Following the death of his grandmother in 1957, Bhumibol followed Buddhist customs by entering a 15-day monkhood. Afterwards, he was ordained at the Temple of the Emerald Buddha in Bangkok.

Once he was finished with his studies, he returned to Thailand where he would remain. Often known as the “People’s King,” he oversaw thousands of developmental projects across the country. While he had a limited constitutional role and no direct political power, Thai people always looked to him as a father-figure for the country. This was especially true in times of political turmoil, which happen all too often in Thailand. In 1992, he scolded two warring politicians as he asked them to make peace – “We are fighting in our own house. It is useless to live on burned ruins.” Despite the dozen successful military coups that occurred during his reign and the constant turmoil, the country made tremendous gains during his time on the throne, moving from an agricultural economy to a modern, industrial one. Learn all about Bhumibol and his reign as King of Thailand in this documentary:

What the Future Holds

Following his passing, Bhumibol’s only son – Prince Vajiralongkorn – will eventually ascend the throne. Unlike his father, he does not have such a great reputation with the Thai people. He will be confirmed as the new king on December 1st, which will mark 50 days since the passing of his father. As is tradition in Thailand, the coronation will not take place until after the royal cremation, which is expected to take place late next year. With some of the strictest lèse-majesté (wounded majesty) rules in the world, open discussion or criticism of royal affairs is not allowed in Thailand. As such, people will most likely keep negative thoughts about the new monarch to themselves. What the future holds for the government of Thailand is up in the air. At the moment, people are busy mourning the loss of their beloved king.

It’s unlikely that there will ever be another world leader so deeply loved by their people than King Bhumibol. Our thoughts are with the people of Thailand in this difficult time.