During our month-long trip from Bangkok through the south of Thailand, we just so happened to end up on Koh Pha-Ngan on a week that was full of parties – the now defunct Jungle Party, infamous Full Moon Party, and the Thai festival of Songkran. One thing was clear – sleep and sobriety were going to be set aside for a few days to ring in the new year. 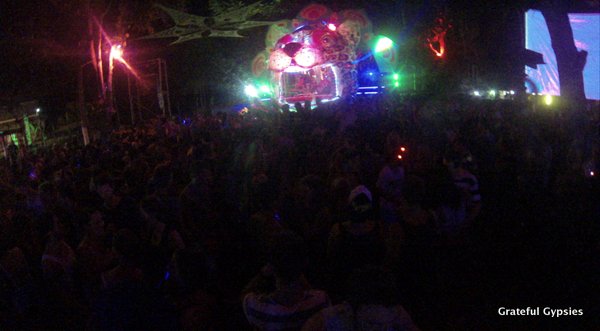 Kicking things off was the Jungle Party, a rave tucked away in the jungle of Koh Pha-Ngan. In an effort to give the beach a break from the constant lunar bashes, a few additional monthly parties were added to the island’s calendar. Recently the party-pooper local government cancelled all events other than Full Moon, which is a shame since the Jungle Party was a damn good time. Much smaller and tamer than Full Moon, it featured what has to be the coolest stage ever – a neon-lit cheetah head. There was also a Muay Thai ring with a few bouts throughout the night and plenty of bars churning out the ubiquitous buckets. It was a great way to kick off the week-long rager – a good party appetizer if you will. 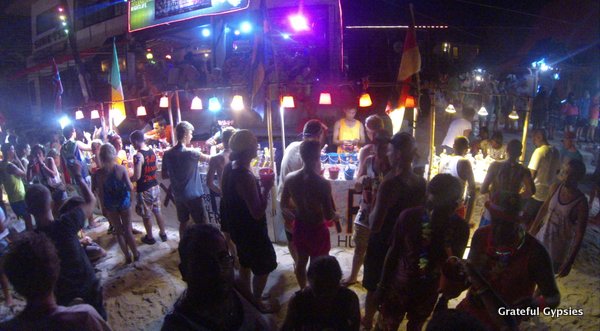 After a day of lounging on the beach, it was time to gear up for the Full Moon Party. Having already been there once before back in 2011, we knew exactly what to expect. For those who have never been, here are a few tips for Full Moon newbs:

1. Don’t start too early. It’s tempting to take advantage of Happy Hour and get the party started early, but keep in mind that the party doesn’t get going until late and it lasts until the sun comes up. Enjoy a fruit shake during the afternoon and save the booze for later. 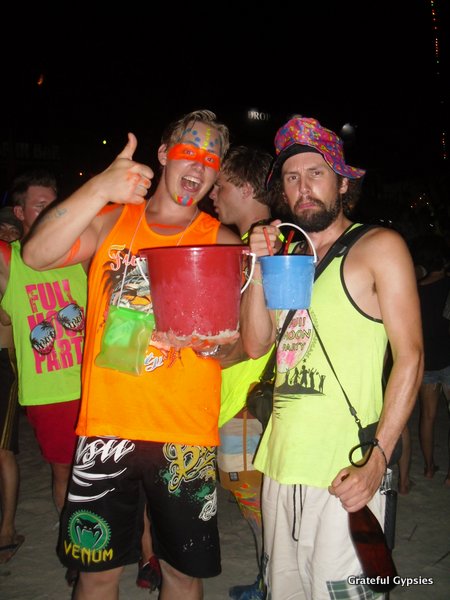 You can always make your one bucket a big one…

2. One bucket is enough. The drink of choice for Full Moon partygoers is without a doubt the bucket – a beach bucket much like the one you played with as a kid full of Thai whiskey and a little dash of Coke. Consuming too many of these will ensure that you end up passed out in the sand. 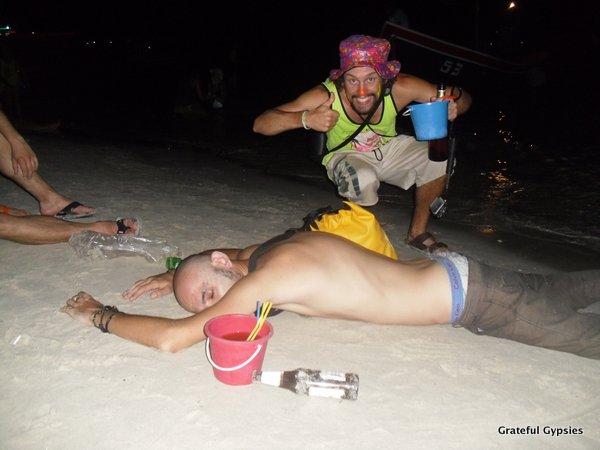 Don’t be that guy.

3. Buy a party tank-top. Chances are you’re going to end up covered in neon body paint, Chang beer, and sand. As such, it’s best to leave any clothes you actually want to wear again in your hotel. Support the local economy and buy a cheap Full Moon party tank-top instead. 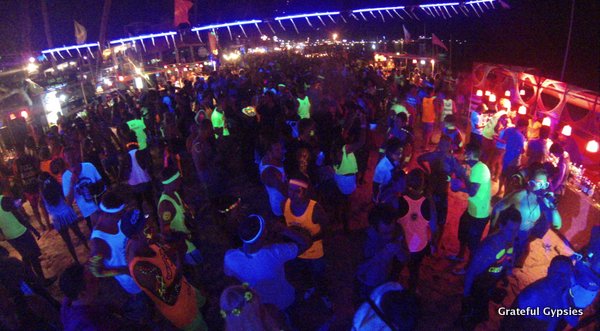 Plus they glow in the dark!

4. Leave important stuff in your room. You’re going to a massive party with 30,000 drunk people. Don’t be an idiot and bring your wallet full of cash, cards, and IDs or your expensive smart phone. Lock those things up at your hotel, as robberies and pick-pocketing are rampant during Full Moon.

5. Don’t buy drugs. Seriously, there are tons of undercover cops at Full Moon on the prowl to bust backpackers for buying and/or selling drugs. If caught, you can expect to face a huge fine and maybe even jail time. Play it safe and stick to the booze for this one. If you really need something else, we did see ladies selling balloons full of laughing gas last time…

Thanks to following these five tips, we had a much better time at our second Full Moon Party. We still didn’t manage to stay up until sunrise, but we actually prefer to get a little sleep from time to time – especially since the next day was the big water fight.

The first two days of Songkran are about gathering with family, visiting the temple, and making merit.  When that’s all finished, the third and final day is a massive water fight. Although the most famous place to celebrate is without a doubt Chiang Mai, you’re sure to have a soaking wet good time no matter where you are in Thailand. 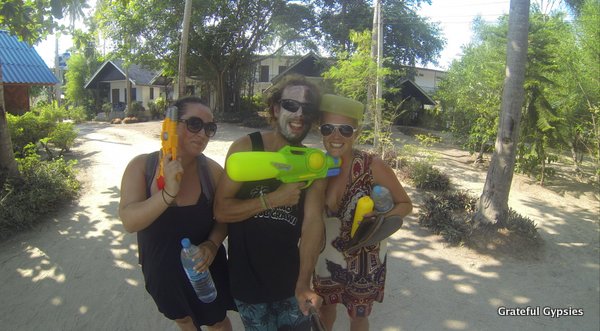 In the morning, we filled up our water guns and headed to the downtown area of the island. People drive around all day in truck beds with huge buckets of water and a variety of water guns to soak those on the side of the road. We fought back as best we could, sneaking up on trucks and spraying people before they could get a chance to reload. It was a wet and wild morning and a nice respite from the intense heat of April in Thailand. 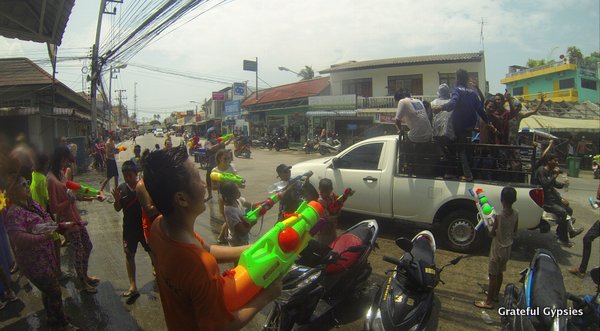 This goes on all day long. 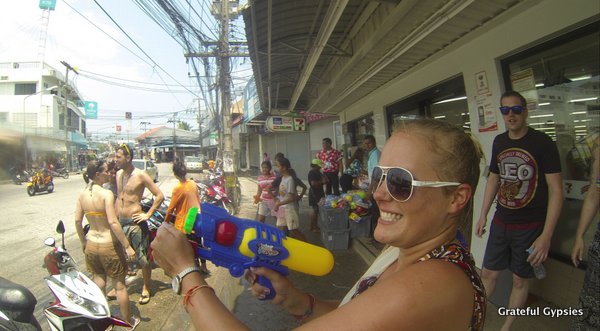 Make sure you buy a good gun for the day. 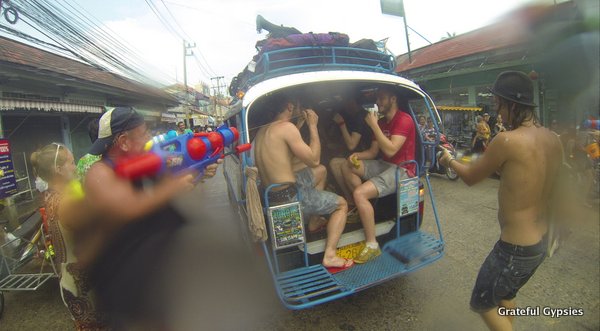 At some point the water fight stopped to allow a parade to pass. Thai people love to party, and their energy was infectious during the Songkran celebration – you just can’t help but dance along. Thai ladies in colorful flowery shirts were busting some serious moves in the street as elaborately decorated trucks with beauty queens passed by. 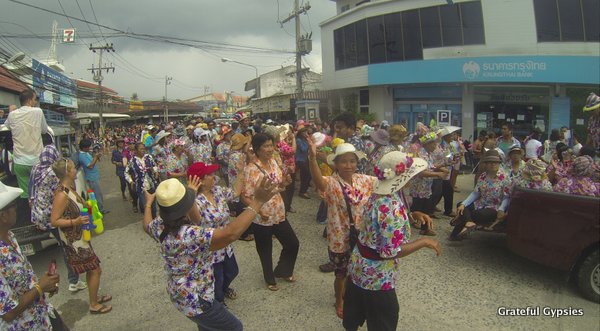 These ladies were gettin’ down. 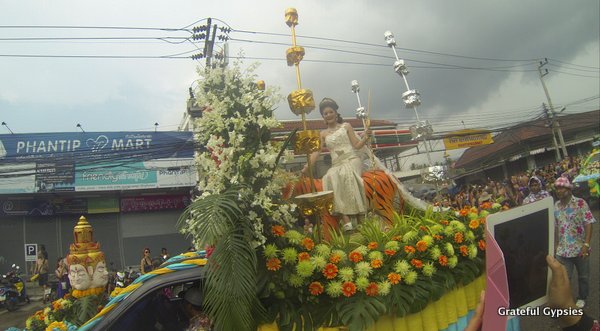 Decorated trucks and beautiful girls in the parade.

Eventually the parking lot next to the 7-11 became the center of the action, with a DJ and a stage set up for people to dance on. The beer and buckets were flowing, everyone was sopping wet, and we were all grooving to the music. 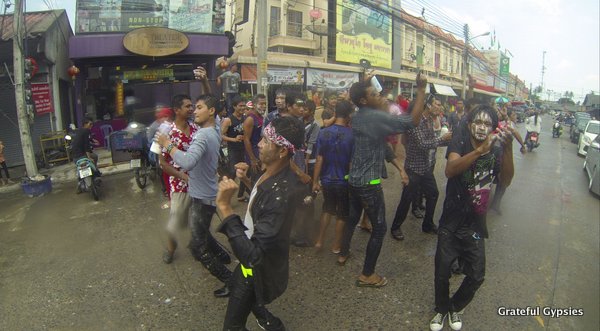 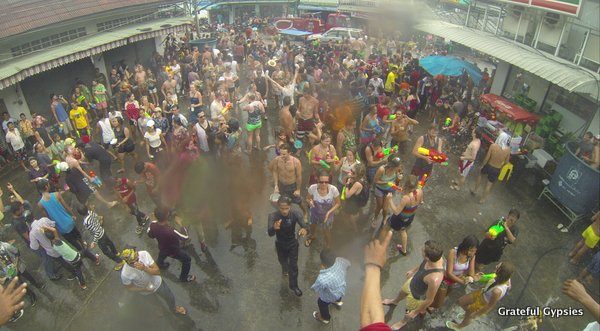 One helluva good time during Songkran!

Things started to wind down around sunset when everyone is soaked, drunk, and tired. After three days of partying, we were happy to call it an early one and head back to our bungalow to get some rest. All in all, it was a great week on Koh Pha-Ngan and an amazing first time experiencing Songkran in Thailand. 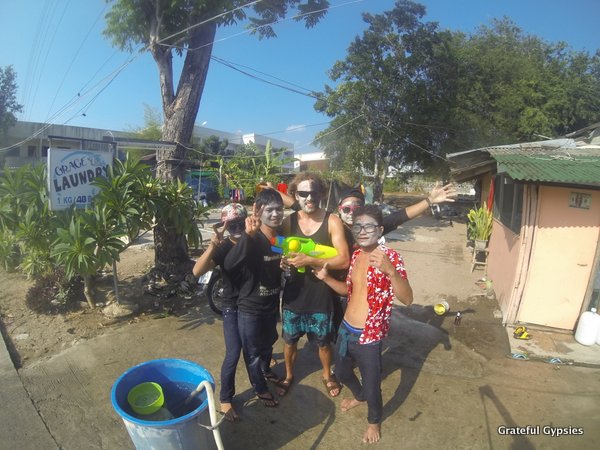 Hanging with my new homies who painted my face.

Have you ever celebrated Songkran in Thailand? We’d love to hear YOUR stories! Leave a comment below and tell us about it!