What are the Thai Tones?

Thai has five (5) tones. They should be memorized in this below numerical order. Why? Because that is how Thai’s learn it. If you ask your Thai friend ‘what tone is that?’, they will count on their fingers for a bit while mumbling until they finally say something like ‘3rd tone . . . I think’. They have no concept of ‘falling tone’, ‘low tone’, ‘mid tone’, and such. It’s just that they’ve been doing it since birth, making it natural for them to use tones sub-consciously.

Anyway, here are the tones:

Print that numbered list out and tack it to the wall if you haven’t already. Below is a chart of the tones relative to each other: 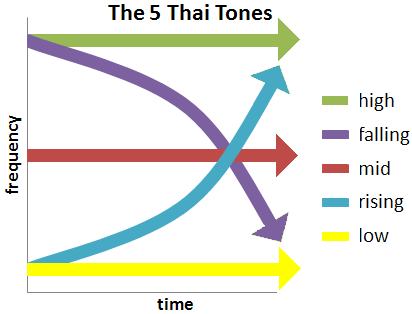 This tone chart is a bit oversimplified, but it’s what you should strive for. In reality, the human tongue, palette, and voice box just aren’t fast enough to shift between all these tones perfectly while keeping up with normal speech. So, you might see more complicated tone charts elsewhere created using sophisticated measurement electronics – but don’t worry about them. Just focus on this simple chart, and as you get better, your “mouth” will naturally tend towards those more complicated tone curves.

What about someone with a naturally high pitched voice, and someone else with a naturally low pitched voice? How does that work? Thai tones are not set at a fixed frequency – it’s all relative to the frequency of the other words in the same sentence. It’s like going up an octave on a musical instrument – the song still stays the same, it’s just higher pitched.